Backing up Photos to the Cloud with Syncovery

Syncovery is a program that offers extreme flexibility in where, what, how, and when to back up photos to the cloud, local hard drives, or network drives. 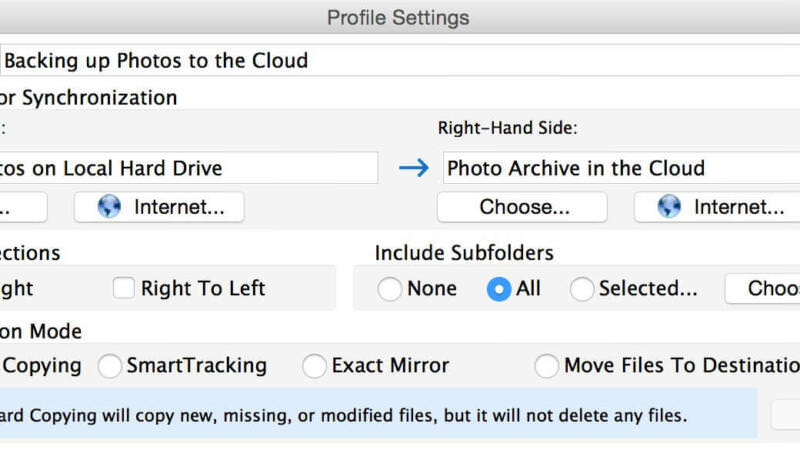 With massive amounts of cloud storage space now available for very reasonable prices, as well as faster broadband becoming much more common, backing photos up to the cloud has become much more practical even for very large image archives consisting of multiple terabytes.

Some services like Dropbox or Backblaze come with their own automatic backup service that runs in the background. But there are also times you might want to use something other than one of those services but still take advantage of automatic scheduling. Maybe you just want to back up your photos regularly to an external hard drive. Or maybe you want to use Amazon Glacier or even your own web server.

That’s where software like Syncovery comes in. There are several utilitarian programs that can do this kind of thing–another popular option for Windows is SyncBackPro. Back in the day they used to be mainly user-friendly interfaces to command-line services like rsync. With the wide range of modern cloud services each having their own protocols, the synchronization programs have become more sophisticated to deal with those different protocols.

Syncovery is software for automating and scheduling the copying or moving of files from one place to another. There are versions for Windows, Mac, and Linux. And it works with just about any filetype, but I’m focusing here on using it as part of a robust backup system for photo archives.

I’ve been a long-time user of Syncovery, since 2005, when it used to be called Super Flexible File Synchronizer. That was before the cloud became “The Cloud,” and before Dropbox or any of its competitors that we’ve now come to rely so heavily on. At the time I was using it for backing up to external hard drives, local servers that I set up, and web servers by FTP. At various times I’ve used it on Windows, Mac, and Linux, but these days I’m mainly using it on Mac simply because that’s the operating system I use most of the time now.

Syncovery doesn’t come with any storage space–it’s not a cloud service itself. What it does is act as an intermediary for a whole variety of cloud services and local drives, whether they’re commercial entities like Amazon Cloud Drive or Box.NET, your own web server, or a local NAS. It runs in the background, and you can run each job manually or schedule them to run automatically.

And one of the strengths of Syncovery is that it gives you an enormous amount of control over how the job runs, with very fine-grained flexibility about what files are copied or synchronized and when. Here’s a quick overview.

The heart of Syncovery’s workflow is based on profiles. Each profile contains information about where, what, how, and when to run the backup job.

In setting up a new profile you need to choose the two locations you want to work with. That’s handled in the top part of the main window.

The simplest is to have a source and target, but you can also set it up so that synchronization makes them both effectively sources and targets. You can copy or move files from one to the other or synchronize them so that they’re duplicates.

To connect to a target you’ll need to add the permissions necessary for Syncovery to access it. For a local hard drive, it’s all handled silently by the operating system. For something like FTP, it’s straightforward with a username, password, port, and server URL. For commercial services like Dropbox or Amazon Cloud Drive, they use a different permission system that will pop up on screen so that you can grant permission. 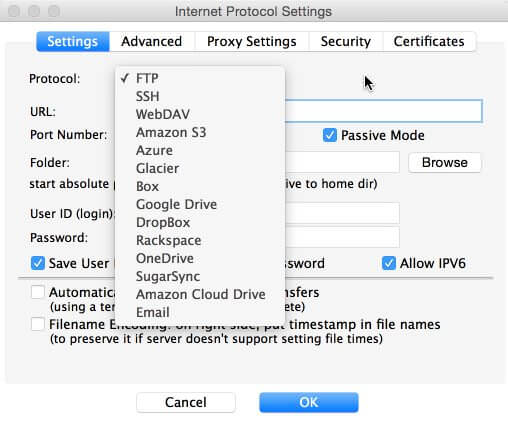 The list of service protocols that Syncovery supports is a moving target as the developer adds new ones. Here’s the list at the time of writing:

In this example, I’m using Syncovery to back up to Amazon Cloud Drive. This is a new feature that, for now, is only available in a beta version (Mac | Windows) and isn’t yet fully finalized. But the process is similar for other targets using other internet protocols.

When you connect Amazon Cloud Drive, it takes some time the first time to look at the files already on the server and work out what it needs to know to operate. The more files you have already on Cloud Drive, the longer it’s going to take, but once it’s done the initial scan it’s much quicker in subsequent times even if you make changes to the folder structure in Amazon Cloud Drive’s browser interface. 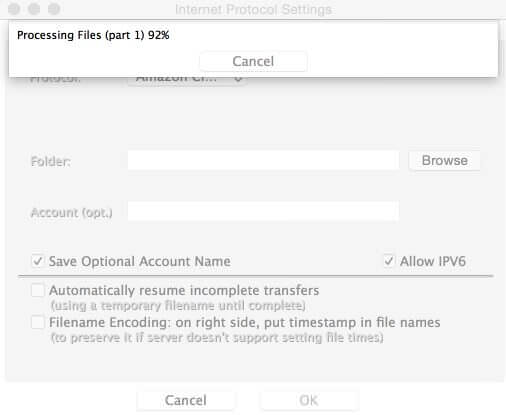 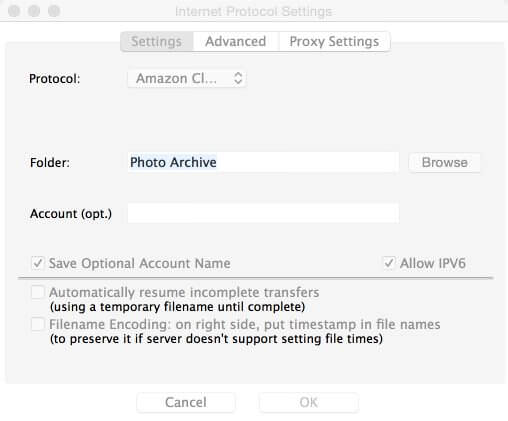 What and How (File Operations)

The Advanced Settings section at the bottom of the panel gives extremely fine-tuned control over how the files are handled. There’s enormous flexibility here, and you can set it up exactly how you like.

It’s here that you control precisely what files are copied and how. There are all sorts of ways that this can be configured depending on your workflow–far more than I’m going to go through here.

Some of the common sections that photographers might use include the File section where you can choose to detect moved or renamed files and folders as well as how to handle files that are deleted in the source location (you can keep copies of the deleted files if you like).

The Masks & Filters section lets you specify which files and folders are included or excluded. For example, you might want to copy only image files but exclude metadata sidecar files and videos (an especially useful feature if you’re using Amazon Prime Photo, where photos are treated differently in your quota than other files). Or maybe you only want to back up RAW files but not JPGs. Or maybe files only named with a certain pattern.

The Safety section is where you can get warnings about deleting files from the backup, a particularly useful feature to guard against accidental deletions on your local copy.

Being able to schedule the copy operations is especially useful for two reasons: firstly, that you can run it frequently enough to give you reassurance that you have a recent backup copy if something goes wrong; and secondly, so that you can run it at times that are convenient to you so that it doesn’t interfere with the times you’re using the computer or bandwidth for something else–you might want to run it at 3AM, for example.

For the scheduling function to work you have to have the Syncovery service running in the background and have its scheduler running (use the scheduler tab to start and stop the scheduler). The schedule for each job is set individually, so you can have one running, say, every hour, another running every 24 hours at 3AM, or another running every week. There’s also a real-time synchronization option that doesn’t run. And you can set it to notify you when it’s running or run in unattended mode where it just does its thing silently in the background.

The last tab provides options for real-time synchronization. And the option to run the profile as soon as the drive becomes available can be especially useful if you’re using an external hard drive that’s not connected all the time.

Once you start the scheduler running you can set multiple profiles and control each individually. 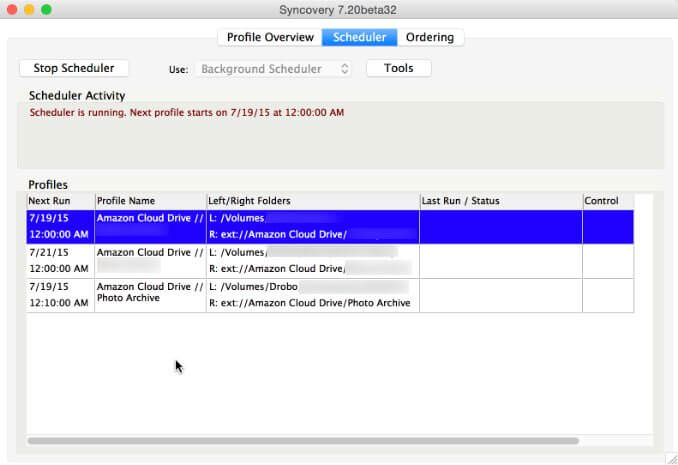 There are all sorts of other features that can come in handy depending on your preferences. There are too many to go through each one here, but here are some that might be of particular interest to photographers:

Versioning: You can keep multiple versions of files so that it doesn’t actually overwrite the original but keeps different iterations. You can choose how many versions to keep and how the versions are named and treated.

Automatically Zip: You can have Syncovery automatically create zip packages as part of a job, which can come in handy for packaging images for clients and delivering by something like Dropbox or your own setup with something else like Amazon S3.

You can find a more detailed feature matrix here.

There’s more to using Syncovery to back up photos than just plugging in and going, but if you want to create your own set of backup systems, it can be an extremely useful way to control what gets backed up, where, how, and when.

I’ve been using it for a long time now and have it to be rock solid as well as extremely flexible. The developer is very responsive and is the original developer. It’s well worth checking out if you’re looking to have much more control over how your photos are backed up.

There’s a 30-day trial version you can find here.

Backing up Photos to the Cloud with Syncovery