Bolt’s VX-760 flash is a portable strobe that aims to be a cost-effective alternative to the Nikon and Canon speedlights. Here’s my review. 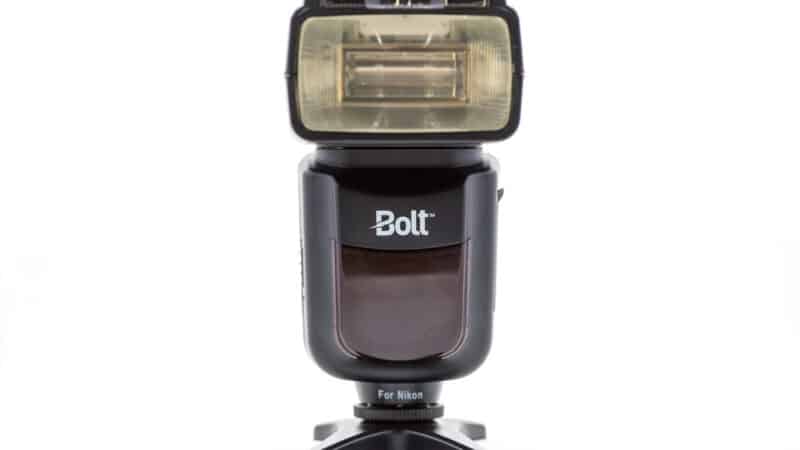 I usually use Nikon speedlights these days, but the top-end models are becoming quite an investment in themselves. So I’ve been intrigued by some of the less-expensive TTL flashes that have come onto the market in recent years. Brands like Yongnuo and Phottix have been putting out very capable flashes for a while now that are small fractions of the prices of the gear from bigger manufacturers like Nikon and Canon. It’s no surprise that they’ve built solid followings.

Another brand that’s in that affordable but capable category is Bolt. I hadn’t used their gear before, but thanks to the folks at B&H Photo, I’ve recently been trying out some of the Bolt flash units and related accessories.

The first one I’m reviewing here is their top-of-the-line model, the VX-760 along with their FreeWave Captain radio trigger system. The specific version I’m using is the VX-760N, which is the model for Nikon cameras. The model number for the Canon is, as you can probably guess, the VX-760C.

The VX-760N support’s Nikon’s i-TTL metering, can be used in a wireless setup either as a slave or master, and supports multiple channels and groups. It has automatic and manual zooming from 24 to 180mm and has power output from 1/1 down to 1/128 power.

The controls on the back of the flash will be pretty familiar to anyone who has used one of the higher-end flash units put out in recent years. This one reminds me of the interface on Nikon units a few models back. There’s a monochrome LCD screen that displays information like the mode (eg. TTL or Manual), the zoom, the ISO and aperture setting, exposure compensation, and various other piece of information relevant to the flash’s operation.

Underneath the screen is the on/off slide switch, five buttons, and a selection dial. At the top right is an LED that shows the status of the charge–green means it’s ready to go at full power.

Because the VX-760N supports external power as well as internal batteries, you have several options for powering it.

AA Batteries. The simplest way to power the flash is by using 4 AA batteries. The way they install is simple–they just go in a compartment in the side of the flash. The door to the compartment slides aside–there’s no need to be fiddling with screws or locks.

Mobile Battery Pack. Bolt also makes a portable power pack that’s designed specifically for their flashes. In this case, it’s the Cyclone PP-310. It provides a lot more juice and faster recycling than using AA batteries, with a 1-second recycling time and up to 500 full-power flashes (or, if you’re using the lower output typical with fill-flash TTL usage, thousands). So it’s a good option for situations where you’re shooting on the go but anticipate using the flash a lot. Wedding shoots would be a good example. It’s not really designed for studio settings–a more typical and probably practical choice there would likely be constant AC power and, for that matter, probably heavier-duty studio strobes–but there’s no reason you couldn’t strap the power pack to a light stand and use it that way if you’re trying to reduce the number of cables running along the floor, you’re using a lightweight mobile studio, or you’re mount the flash in a place that’s not easily accessible.

It comes with a dedicated, coiled cable to connect to the flash unit. The socket for it is on the opposite side of the flash unit’s body from where the AA batteries go (under a rubber cover).

The Cyclone PP-310 comes with the power pack, an AC charger, a DC charger, the connection cable, and a surprisingly solid shoulder strap.

You can pick it up separately or as part of a kit sold with the Bolt VX-760.

Using in a Wireless Setup

The VX-760N has built-in support for optical triggering from the camera to act as either a slave or master. If you want to use a stronger and more reliable radio signal you’ll need to add a transmitter and receiver into the mix.

The ones I’ve been pairing it with are in the Vello Freewave Captain kit. It’s a pretty straightforward combination of transmitter and receiver that’s been working well for me. It’s very attractively priced at $130 for a kit that includes both parts.

It uses the 2.4GHz frequency, so is strong and reliable, supports TTL, has built-in controls to change the flash’s exposure compensation, and, if both your camera and flash support it, will work with high-speed sync up to 1/8000 of a second (the Bolt VX-760N doesn’t support high-speed sync, but I tested it out by putting a Nikon SB-5000 on it and it worked as advertised all the way up to 1/8000). It includes a carry case for both units as well as sync cables if you want to use the transmitter and receiver as a wireless remote shutter.

With the Vello Freewave Captain you can adjust the exposure compensation directly from the transmitter without having to mess with the back of the flash unit. I ran into no connection reliability issues–the combination just worked as you’d expect.

The VX-760N support’s Nikon’s i-TTL metering, can be used in a wireless setup either as a slave or master, and supports multiple channels and groups. Just like the Nikon SB-5000, it has automatic and manual zooming from 24 to 180mm and has power throttling down to 1/128 power.

It also has autofocus assist to help the camera’s autofocus system get a lock in low-light situations.

For the most part, its connections and shapes are pretty much industry standard, so you can use with the same kinds of gels, light modifiers, and stands that you’d use with other flashes.

Many flash accessories these days come with universal-style mounts. This, for example, is with the Vello EF-GS flip-mounted gel set, a handy and inexpensive option for adding some pre-cut gels into the mix. Its holder uses a velcro strap to go around the flash head, so they’ll work with most full-size flash units. Or you could go the old school route of cutting your own CTO gels. Either will work just fine with this flash head–it’s just a standard shape.

It’s surprisingly loud. When you first get turn it on, for example, you get quite a loud whine for a second or two as it powers up and gets ready. That’s aside from the feedback beeps that you can turn off in the settings. It’s also loud when zooming.

There’s no lock on the tilt of the head. The head tilts with clicks at 15-degree increments, but there’s no lock to hold it in firmly in place at those angles. The Nikon speedlights, for example, have an unlock button on the side of the hinge that you have to press to change the angle. While the absence of such a lock isn’t a huge deal, I have found it to be a bit of a nuisance when using relatively heavy modifiers like the ones from MagMod. With those on, the head can swing around a bit under the weight.

The locking mechanism to secure it to the camera’s hot shoe or a light stand is the old-style screw lock. I prefer the quick and simpler switch lock that Nikon speedlights use, but the screw lock works just fine and holds it securely.

It comes with a soft, lightly padded holder case, a basic plastic foot so you can stand the flash up without a stand, and a short PC sync cord.

It doesn’t come with batteries or snap-on diffusers or gels.

The Bolt VX-760N doesn’t have all the bells and whistles of the latest and greatest models from Nikon and Canon. It’s marginally slower in flash duration and recycle time. It doesn’t have the built-in cooling systems that some of the new flagship speed lights have, something that rapid-fire wedding photographers might miss. And it doesn’t do high-speed sync, which is a function I like to use quite a lot on location. But the reality is that many photographers don’t need or even want all those bells and whistles. When it comes to flash, there’s a strong argument to be made that simpler is often better. If you’re after a stable, workhorse, the VX-760N is a very capable flash unit–surprisingly so, even.

So if you don’t need the high-speed sync capabilities and some of the other cutting edge flash features, the Bolt VX-760 is a very capable and cost-effective option that’s well worth a look.

You can pick them up at B&H Photo.