If you’re looking for a way to spice up your timelapse captures, adding some rotation can be a good start. Here’s my hands-on review of the Camalapse 4 360-Degree Panning Timelapse Base. 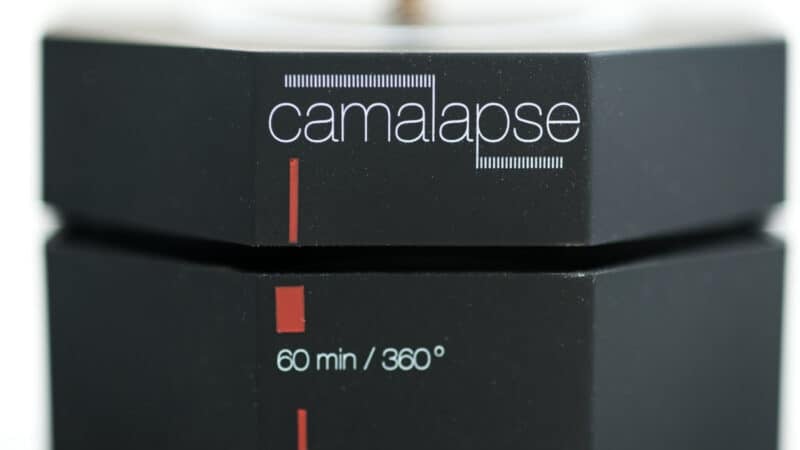 Adding rotation to your timelapse capture can be a good way to make the footage more interesting. And thanks to panning timelapse heads, it can be a very simple thing to do that doesn’t require hauling a bunch of cumbersome equipment.

There are a number of different options for adding this, some of which I’ve rounded up before. One of the simplest, least expensive, and most portable is the Camalapse 4.

In broad strokes, it’s essentially a glorified kitchen timer. Just attach a camera to the top, twist it, and the rotation will unfurl at its measured pace. There’s a standard 1/4″ tripod attachment on top that goes into the bottom of your camera and a tripod socket in the bottom to attach to a tripod or other mounting point. 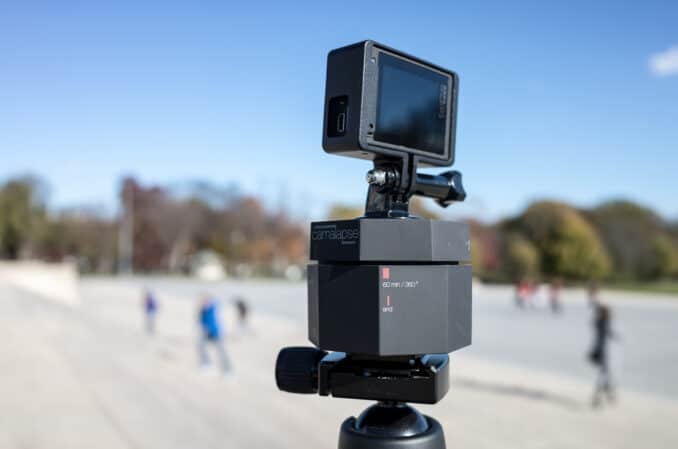 The Camalapse 4 rotates in tiny steps. In general, each step is small enough that the result is smooth rotation. But because the rotation isn’t aligned with your camera’s shutter in the same way that much more expensive panning devices can, you can sometimes end up with the shutter activation becoming slightly misaligned with the steps. In practice, what that means is that you can get tiny jumps between frames that make it look less than silky smooth. That said, I’m nitpicking here. As you can see from this example, it’s pretty smooth, and most of the time, I haven’t found it to be much of an issue.

But if you’re using it for something where frame-perfect, silky-smooth panning is a requirement, you’re probably going to have to upgrade to something a bit more sophisticated that can control the shutter and rotation in tandem. Oh, and this isn’t the type of shudder than can be fixed by stabilization tools in things like Final Cut Pro X–the results can be worse than the original.

I did run into an issue when using the Camalapse in the wind. There’s a little bit of give between the two plates–the one that rotates and the base. With the Camalapse 4 by itself, it’s hardly noticeable, but the extra weight and leverage of a camera make it more noticeable. Here’s what I mean:

It doesn’t look like much, but when the wind catches the camera, it can introduce a slight wobble that’s noticeable in the timelapse. That’s not great when a solid and still base is such an essential element of smooth timelapse capture. Here’s an example of what I mean, where you can see the jumpiness on a pretty windy day (this was one a very solid tripod that was down low and weighted):

One of the things I don’t like about this and other mechanical rotating devices is the thing that will remind you most of an old-fashioned kitchen timer: the distinctive tic-toc sound as it rotates.

The sound the Camalapse generates while it’s working is definitely noticeable, and it’s not going to be suitable in situations where you need silence. People around you will notice it.

If you need something quieter, you’re probably better going with something fancier (and more expensive) like the MOVO MTP-10, which is practically silent.

Dealing with the Elements

While the Camalapse 4 doesn’t have any specific weatherproof features, because it’s entirely mechanical, it works just fine in rain or spray. There are no batteries or electronics to short-circuit like there are in the fancier MOVO Electronic Ball-Head or SYRP Genie Mini. If you regularly get it wet, you’ll likely run into rusting internally, but occasional dampness doesn’t hurt it. 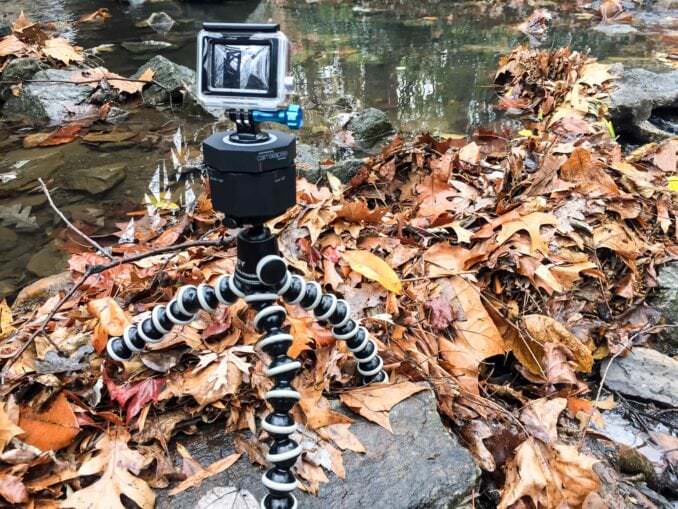 As the Camalapse folks put it, the device is “water resistant but not water proof.” I suppose you could even use it underwater in a pinch, although the materials aren’t designed for such use and probably won’t last long, especially when pitted against saltwater.

The Camalapse is light and small, so it’s very portable, but it’s really not strong enough to handle the winds at high speeds, and it might well come apart and create unintentional projectiles. That’s going to be especially true with a heavy camera on top, where the center of gravity will constantly be shifting. The Camalapse website even explicitly says that it’s not suitable for use on moving objects. While I have used it on the hood of a car with a heavy-duty magnet base with a GoPro HERO4 Silver, it’s very much a case of use at your own risk and with caution.

The Camalapse is lightweight, which is great for portability, but it’s not so great in terms of solid construction. Overall, it feels pretty flimsy, and after a few uses, something came loose inside mine, with some small piece of metal or plastic now rattling around inside. But it doesn’t appear to have affected the actual performance–at least, so far.

The manufacturers claim that the Camalapse 4 will support cameras up to 5 lbs so long as they’re properly balanced, with the center of gravity correctly placed. I find that a bit of a stretch–it’s really best with very lightweight cameras like GoPros, smartphones, point-and-shoots, or small mirrorless cameras. It’s not going to work well with most DSLRs out of the box, at least not without getting a separate balance plate (something like this. And even then, its construction just isn’t solid enough that I’m going to be reaching for it when working with a DSLR.

On something like a GoPro or smartphone, on the other hand, it’s a simple, lightweight option that works well. In reality, you’re not getting added performance over what you can get with cheaper DIY option, but you’re getting the convenience of having something that comes with both the tripod bolt and the tripod socket.

So if you’re looking for a way to spice up your timelapse captures that works out of the box, or maybe looking for a fun gift for a keen GoPro or smartphone shooter, the Camalapse 4 is worth a look.

I bought mine at Amazon. It’s also available at B&H Photo.