Backing up Photos to the Cloud with CloudBerry

There are several different apps that can automate and schedule backups of photo archives to different cloud storage providers. CloudBerry is one of the simplest, and it works with a wide range of cloud services. 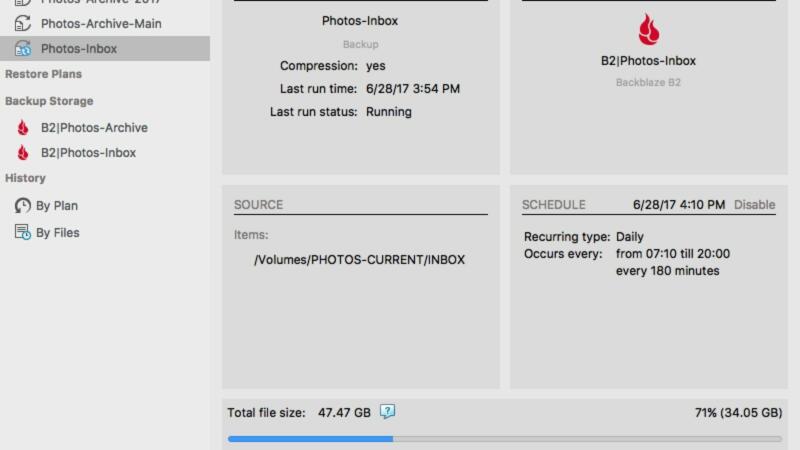 Backups are a crucial part of any photographic workflow. Ideally, you should have at least three copies of all your photos, each on different media and in different physical locations.

In recent years, with faster, cheaper broadband and tumbling prices of storage, cloud backup has become a realistic option even for photo archives of multiple terabytes. I have a rundown of some of the best cloud storage options for photographers separately. Here I’m focusing on an app that can help with managing your own backups on commercial cloud services like Amazon S3, Microsoft Azure, or Backblaze B2.

There are several apps that can automate and schedule the backup process. Syncovery is a very good and powerful one that I’ve covered in detail before. I’ve used it for several years and have been very happy with it. To the extent I have a criticism, it’s that it can sometimes be too powerful with too many options that in turn increases the confusing choices or the chances of a wrong setting. Other favorites on Mac, both of which are also very powerful, are ChronoSync and Arq, but neither of those support Backblaze B2 yet, my preferred cloud storage service. (Update: Arq has since added B2 support.)

Recently I’ve been trying out CloudBerry. Among their offerings are desktop apps for Windows, Mac, and Linux from which you can create backup jobs of specific folders or drives to run automatically on a schedule. And it’s compatible with a wide range of cloud storage providers.

There’s a free version for personal use. It has most of the same features, but it lacks the options for encryption or compression.

The Pro version adds encryption and compression options and costs a one-time license fee of $29.99.

One very important thing to bear in mind, though, is that the CloudBerry license does not include any storage space. You pay that directly to your preferred cloud storage provider based on their rates and the amount of data and usage. CloudBerry has a very basic cost calculator that gives you a rough idea, although to get a more accurate estimate with more granular options like downloading costs, etc, you’ll want to check directly with the storage supplier’s rate charts (here’s the one for Backblaze B2, Amazon Glacier, Amazon S3, and Microsoft Azure.

I’ve been using the Mac desktop app with a Pro license and backing up files to B2. Here’s a quick rundown of some of the main options and features.

When you first create a new backup plan you’ll need to select the cloud service you want to use. Here’s the current list of cloud services it can work with:

You have quite a bit of control over the source files. You can select which files to back up on a folder level from local hard drives as well as external and network drives. What you’re selecting here are the folders for a particular backup plan. If you want some folders from a specific drive to be backed up on a different schedule, you can designate those in a separate plan. For instance, I have my older files backup on a weekly schedule because they rarely change. But photos from new shoots are backed up much more frequently, even up to every few hours. 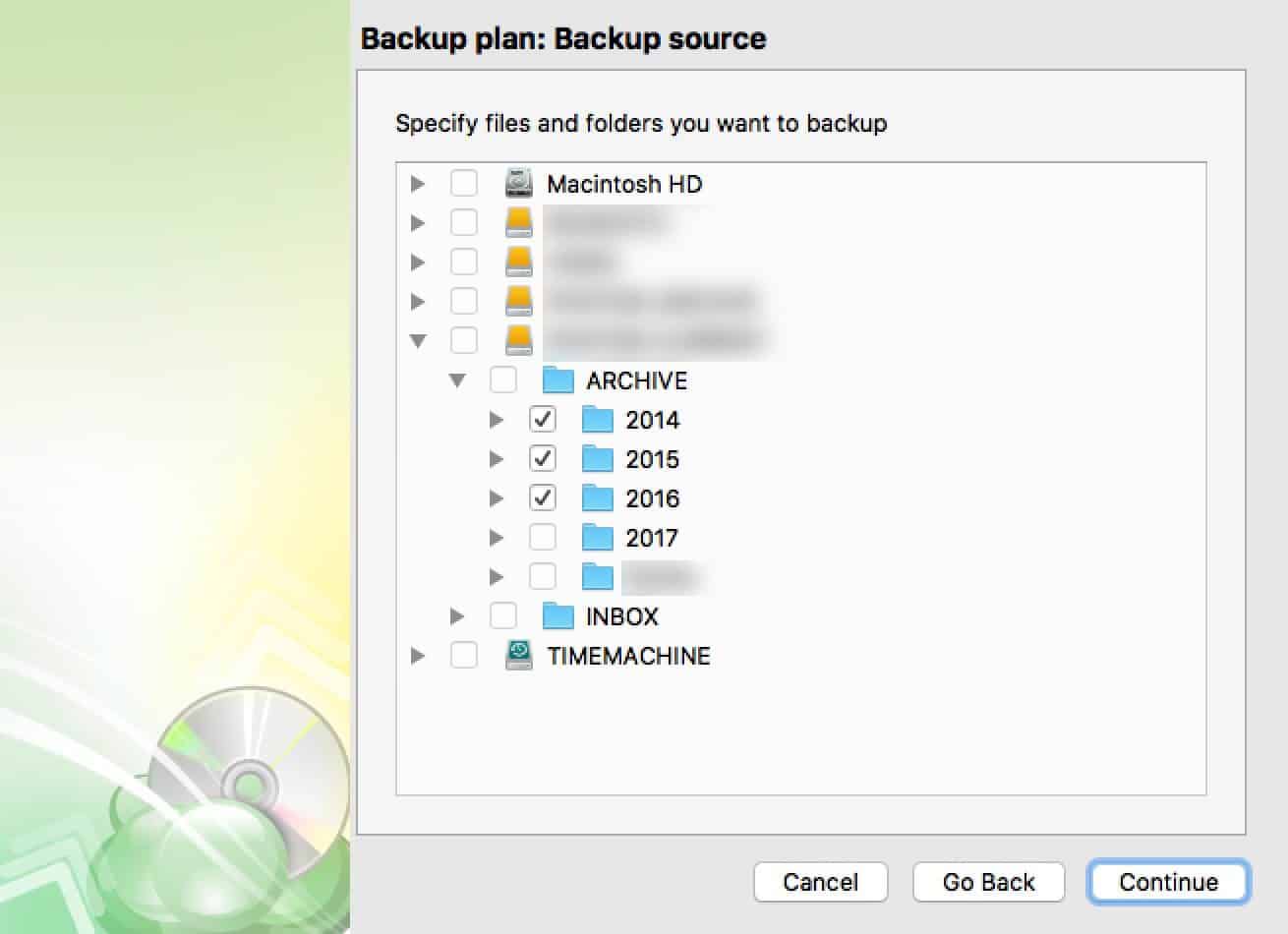 There’s quite a bit of flexibility when it comes to scheduling. You can choose options for Daily, Weekly, or Monthly. But that doesn’t necessarily mean you’re stuck with only once a day or once a month. By clicking on the Weekly option, for instance, you can choose multiple days of the week. And with the Daily option, you can set it to run at a specific time each day or at intervals. 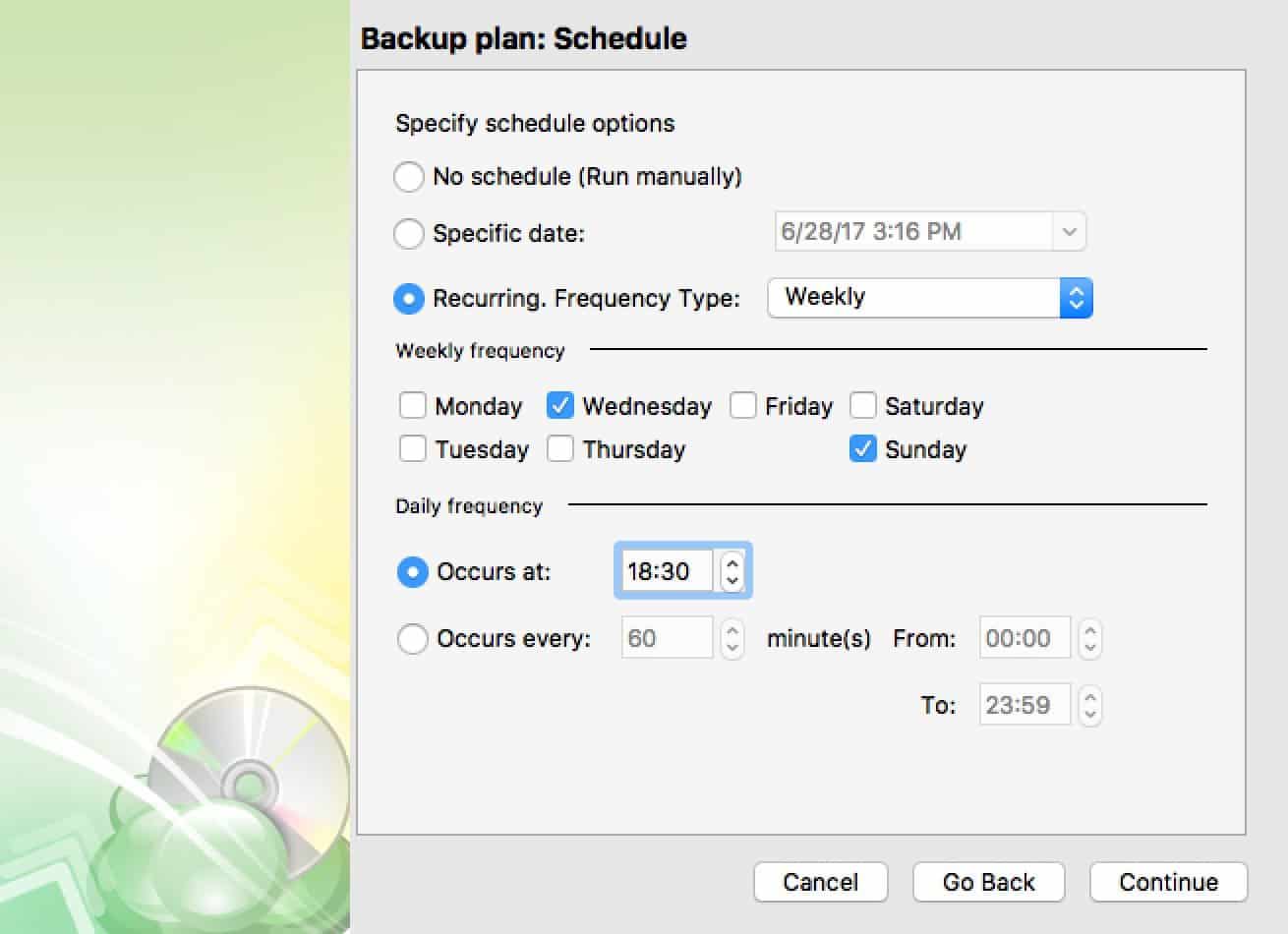 There’s also quite a bit of flexibility in how it handles deleted files. There are various options for how they’re handled, including specifying a delay for deleting files from the backup that have been deleted from the local version. In this example, I’ve set it for a 90-day delay for old photos from my archive. Because I’m not working with those old files very frequently, it might well take me a while to notice a problem. So I want a very generous delay. With newly ingested files that I’m going to cull, I make it a much shorter delay of, say, one day. 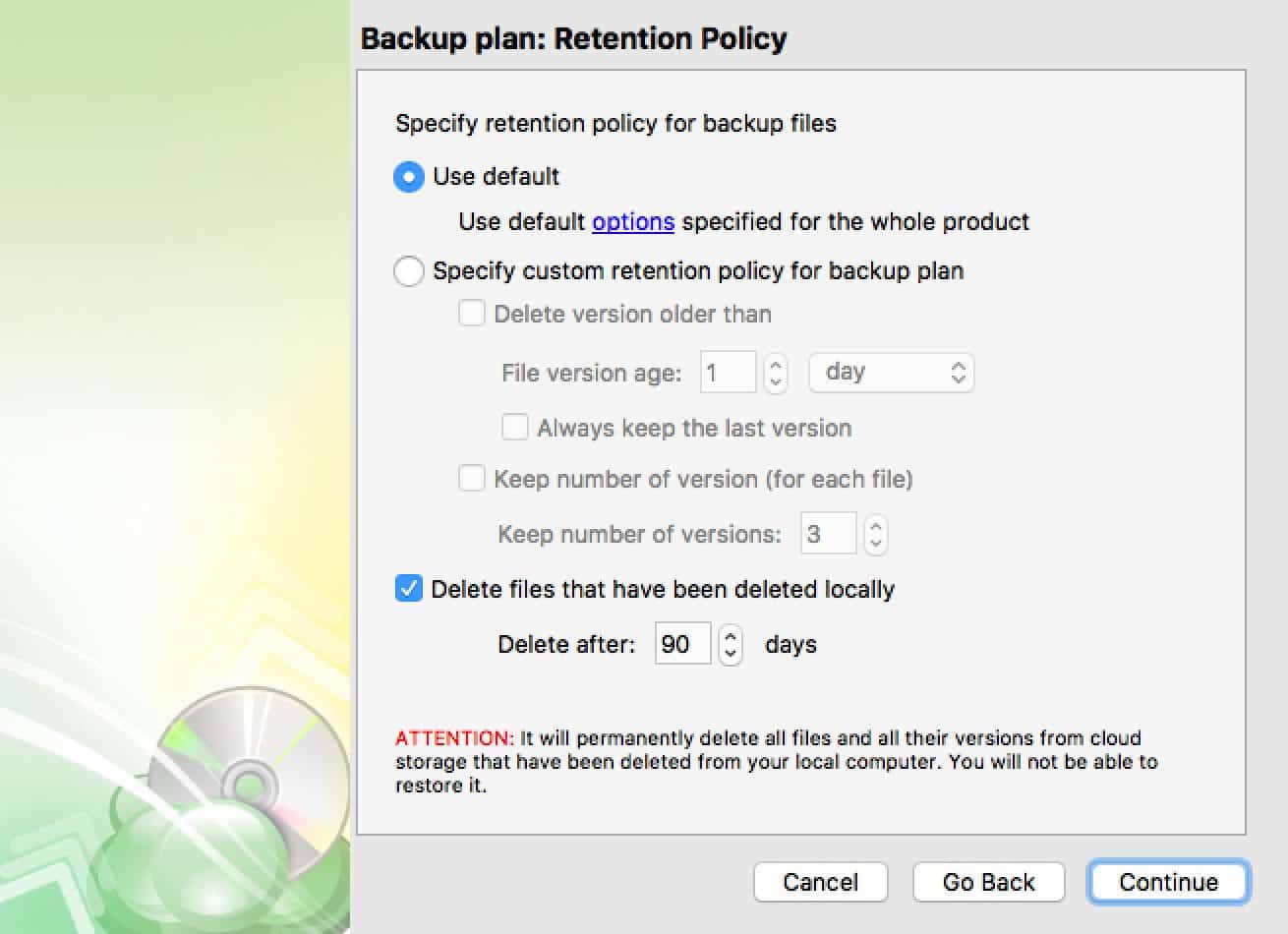 You can also set it for an email notification if the backup fails for some reason. 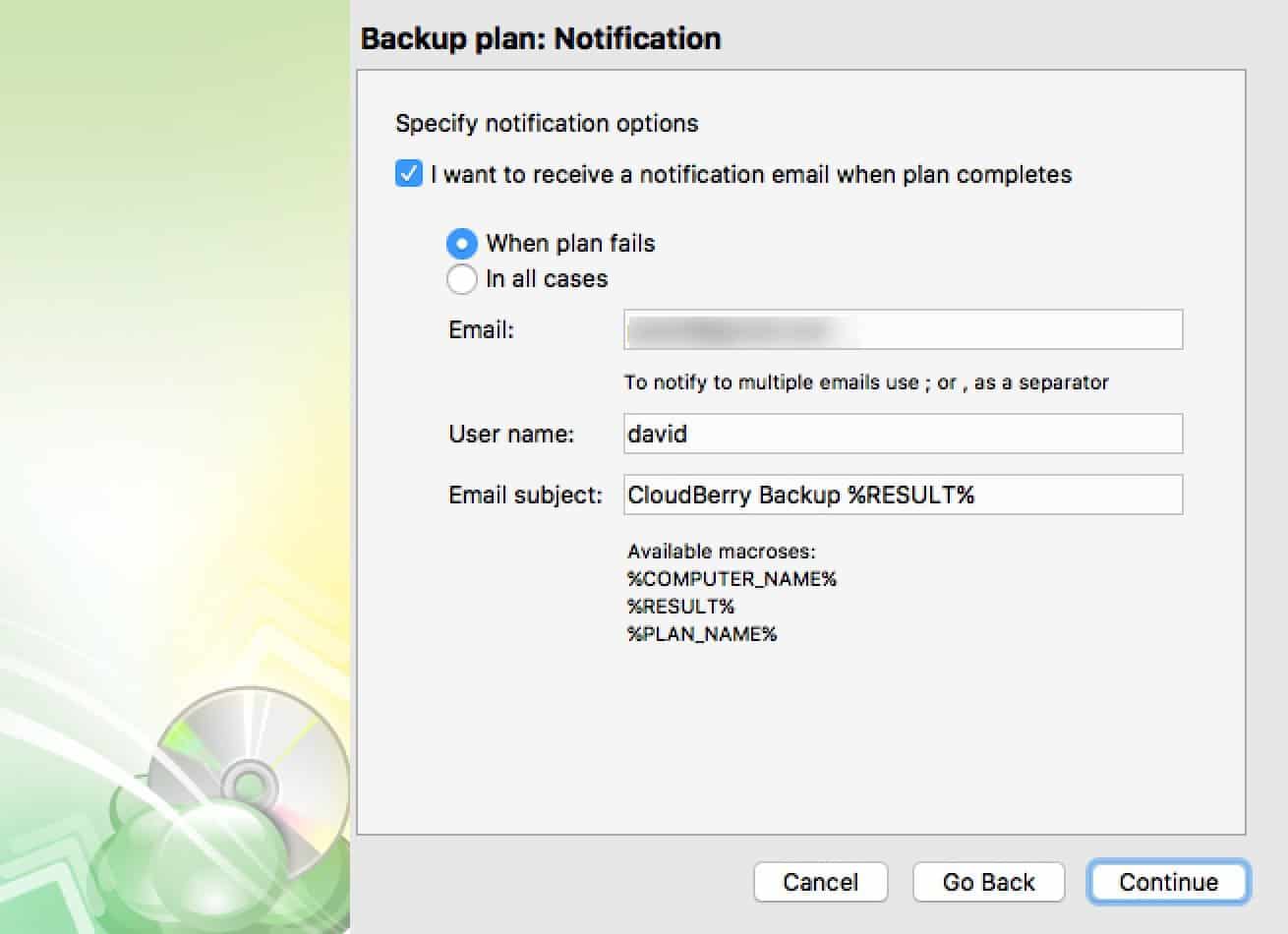 And, of course, you can create multiple backup jobs on different schedules with different sources and using different cloud services. 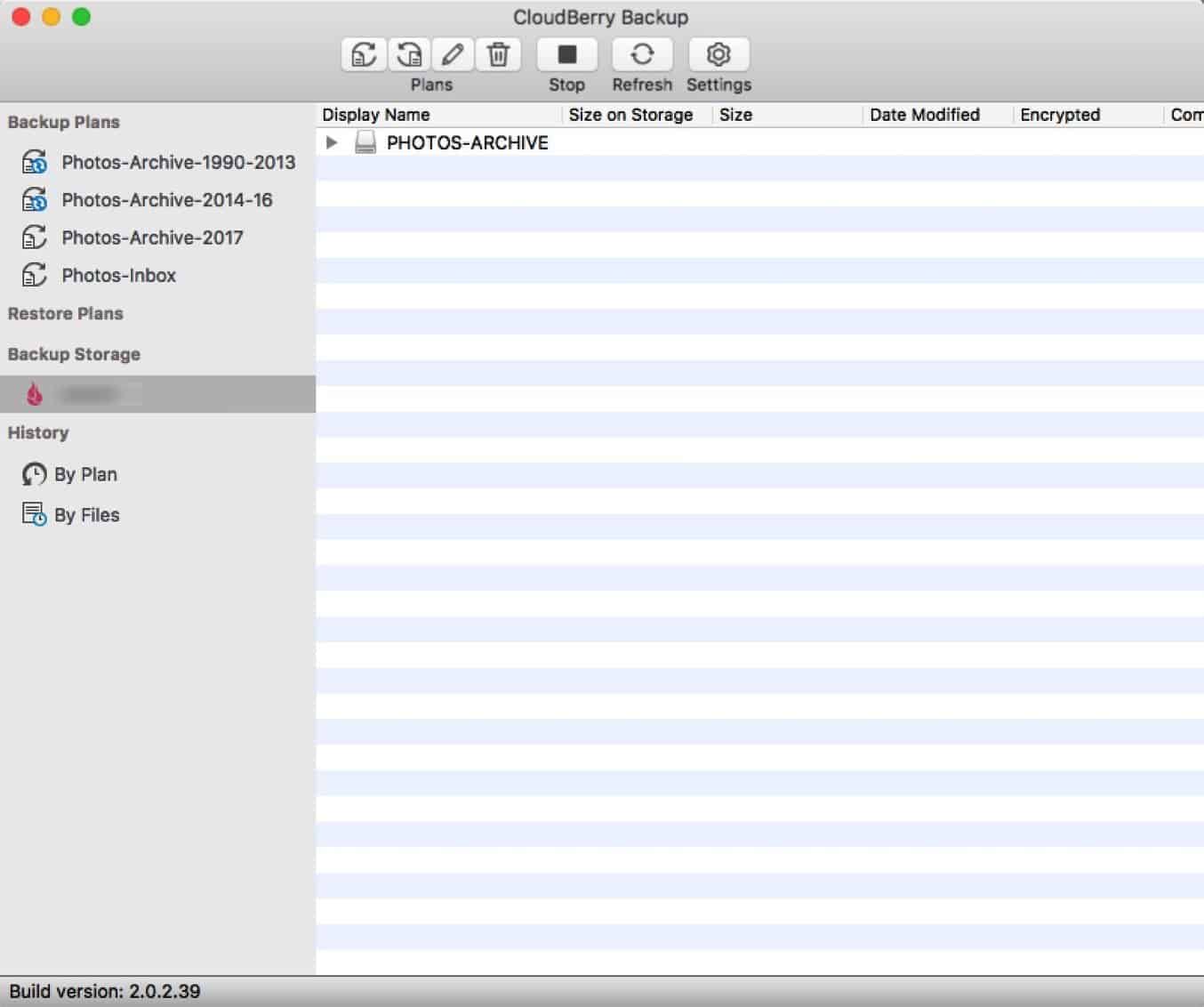 That’s by no means all of the options available, but hopefully, it gives you some idea of how it works and how it can be useful for backing up photo archives to the cloud. There are also more fine-grained controls over things like retention policies for deleted or missing files and throttling of bandwidth.

The promise is good. In practice, my experience with it hasn’t been all peaches and cream. I’ve found the CloudBerry Backup app (v.2.0.2.39 on Mac) to be less stable than it should be. It has crashed on me a few times when creating new jobs, and it can sometimes come to a crawl and start using enormous amounts of CPU, especially on long and large backup jobs, requiring me to kill the process. Overall, it has worked quite well for me, but these are the kinds of issues that you really don’t want to see in a backup app even if they’re rare. And it’s worth noting that I’ve been using it mainly with Backblaze B2, so it’s possible that the glitches I’ve been seeing are related to interactions between CloudBerry with specific cloud services, in this case B2. So your mileage might vary. Either way, after a couple of weeks of using it I ultimately decided to go back to using Syncovery.

The CloudBerry Backup app’s interface works and does what it needs to do, but it’s not especially slick, especially compared with native apps like ChronoSync and Arq. That’s certainly not a consideration for everyone, but for some it is.

Also, I’d again emphasize that the CloudBerry Backup app doesn’t include cloud storage space. It’s simply a worker app that works as an intermediary. Storage and transfer fees all have to be handled directly with each cloud storage provider you’re working with.

You can download the free (personal) version and a free trial version from CloudBerry’s website. There are versions for Windows, Mac, and Linux. The free version is for personal use only and doesn’t have encryption or compression. To enable those options, or for commercial use, you’ll need a Pro license for $29.99.

2 thoughts on “Backing up Photos to the Cloud with CloudBerry”

Backing up Photos to the Cloud with CloudBerry