How To Compile a TimeLapse with Quicktime 7 Pro

A step-by-step guide to compiling time-lapse video footage from a sequence of time-lapse photos in Apple’s Quicktime 7 Pro.

Apple discontinued support for the Quicktime 7 family of products with their macOS Mojave release. So if you’re using that or later versions of macOS, you won’t be able to open Quicktime 7 Pro. I’m leaving this post here for anyone still using older macOS versions.

There are many software apps that can take a series of still images and compile them into a time lapse video. If you’re on a Mac, one of the most reliable and flexible apps to do it is Quicktime 7 Pro.

Importantly, this is not the regular version of Quicktime that is included by default in Mac OS. Regular Quicktime Player doesn’t have the Open Image Sequence feature, which is essential to this process. It also doesn’t have anywhere near the same level of control over editing In and Out points or exporting options.

Quicktime 7 Pro is actually an enhanced version of an older version of Quicktime. It includes some editing controls and a lot more power in its exporting and converting video formats. It’s still a “current” version, is still sold and supported actively by Apple, and there is no equivalent enhanced version for the current version of regular Quicktime Player.

Quicktime 7 Pro isn’t available in the Mac App Store. ~~To get it you have to go to the separate Apple Online Store (here’s the direct link). There are versions for both Mac and Windows. Once you pay for a license you get a registration code. And to unlock a number of the key menu items you have to register your copy.~~

Before you get to the stage of compiling your time-lapse video with Quicktime 7 Pro, you have to shoot your images and prep them. This isn’t the place to walk through those steps, but there are a few things in prepping the image files that will make compiling them in Quicktime Pro easier.

Firstly, it’s best if you can size them to the size of the video you plan to make. So if you plan on making a 1080HD video, start with images that are 1920px by 1080px. This isn’t absolutely necessary, but it does makes things neater and gives you a bit more control over things like sharpening.

Secondly, it’s easier if you export your images from your image software with sequential filenames and the image sequence is in its own folder. 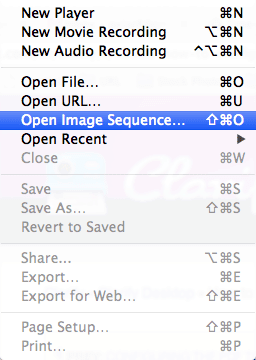 Choose any image from the sequence. You can choose the first one if you like, but it doesn’t matter–any of them will do. Then clock the Open button at bottom right. 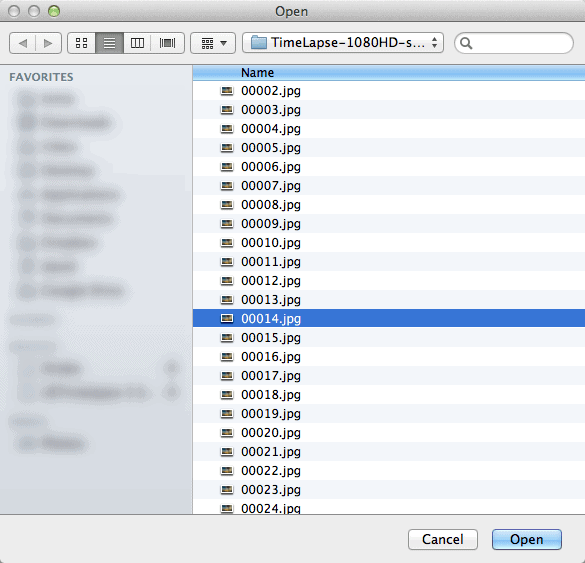 Choose a frame rate. Ideally you’d choose the frame rate you want to use for the final video. But what you’re choosing here is just for the preview playback. You’ll have the option to set the export frame rate when you export.

If you click on that drop-down menu you’ll see a bunch of other different frame rates. Ideally, you should choose whatever frame rate you’ll be using for your end product. For smooth video, you’ll want 24 frames per section or above. If you’re making a master copy, 30 or 60 are good options. The slower rates, like 2 seconds per frame, are good for slideshows but not much good for time-lapse. 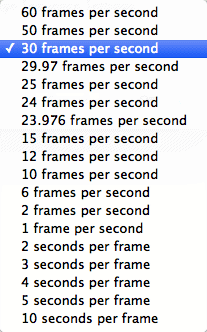 The video window will now have your image sequence in it and you can use the usual video controls to preview it. If you’re doing a large video of, say, 4K, 2.7K, or even 1080HD footage, it might stutter in playback. It is, after all, completely uncompressed at this point. It can often help to reduce the window size (View > Half Size (or ⌘0 keyboard shortcut). 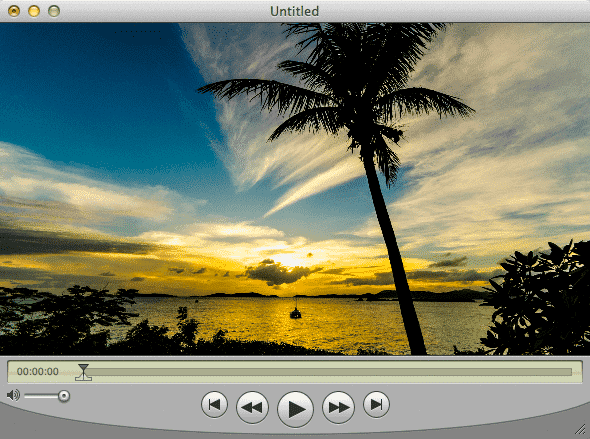 You can set in an out points by dragging the small markers immediately underneath the timeline. When you export the video, the In point will become the start of the video and the Out point will be its end. The small upside-down triangle just above the timeline is the playhead. 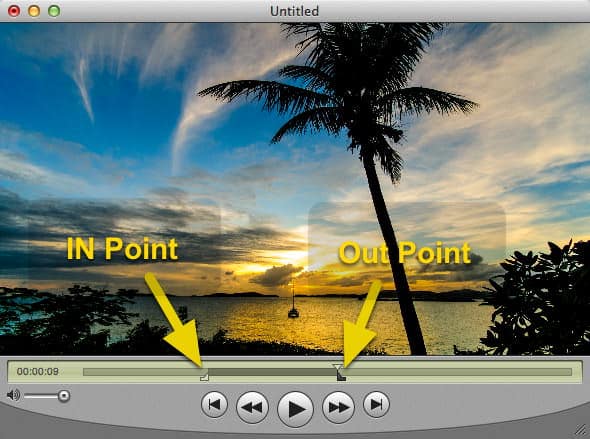 You can add a soundtrack directly in Quicktime Pro. Doing it here doesn’t offer you much in the way of options, but it is an quick and effective way to dress up an otherwise silent video.

Go to File > Open and choose a sound file such as an MP3. It will open in a new Quicktime player window.

With the sound file window active, go to Edit > Select All (or use keyboard shortcut ⌘A). You can also set the In and Out points if you only want to use part of the sound file. 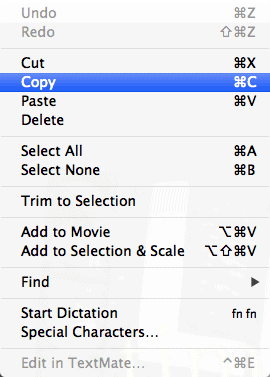 Click back on the window with your video to make it the active window again. Then go to Edit > Add to Movie (or use keyboard shortcut ⌥⌘V). 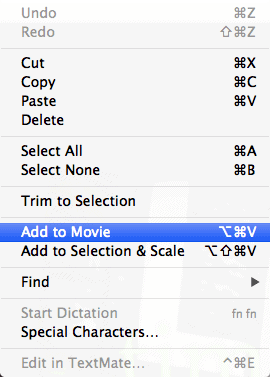 When you hit the play button now you should have sound. There are a couple of things to watch out for. Firstly, the soundtrack will be added from the In point. Which makes sense–but it’s just something to be aware of. Secondly, if you have a sound file that’s longer than your video clip, the timeline will change to the longest timeline. But for the part where there’s only sound and the video has finished, the last frame of the video will stay static while the soundtrack plays. (And to further complicate things, there seems to be a bug in Quicktime Pro sometimes when the image freezes on playback while the audio plays.) To trim the timeline, use the In and Out points. 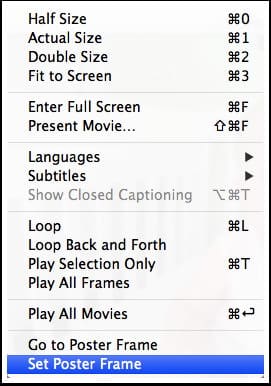 Got to File > Export (or use keyboard shortcut ⌘E).

Type a name for your video file in the Save As box at top. 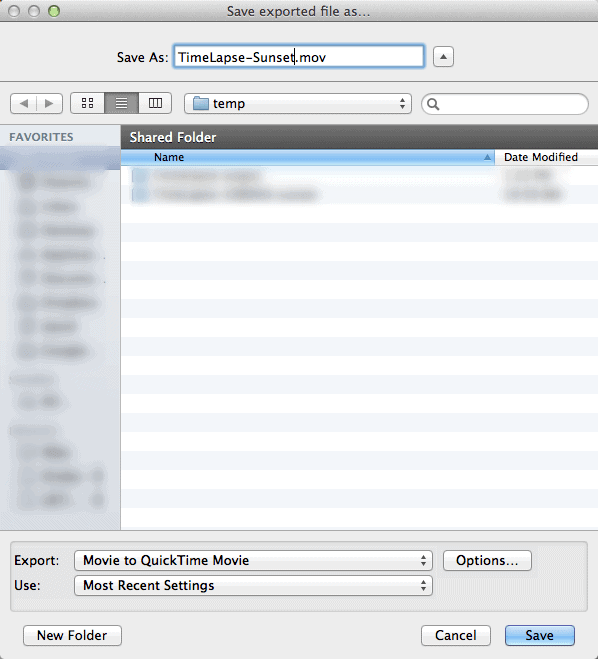 Down the bottom of this popup screen you have choices about what format you’d like to save the video as. Hit the Options button for, well, options. If you haven’t added a soundtrack, the Sound option will be grayed out. 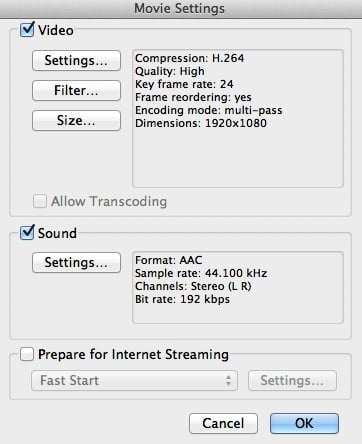 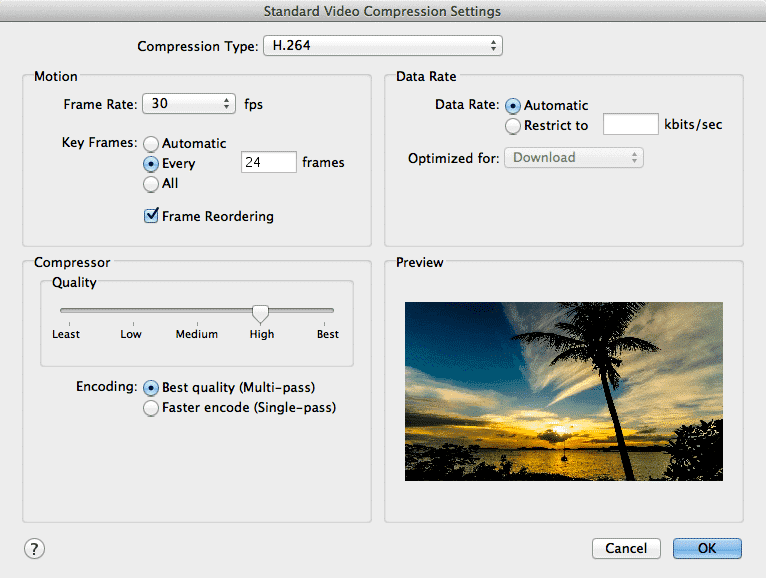 If you hit the Compression drop-down menu you’ll get a long list of different codecs. Exactly which codecs are in that list will depend on what video software you have installed on your system. In in doubt, H.264 is an excellent place to start.

Once you’ve set the Compression Type, Quality, and Frame Rate (and any other settings you want), hit the OK button. You’ll get taken back to the Movie Settings dialog box. From there, if you’ve got a soundtrack, you can hit the Settings button in the Sound section. Again, you can set different format and quality settings here. 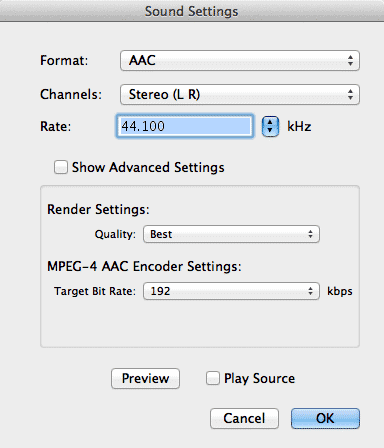 Once you’ve set your sound settings, hit OK to get back to the Movie Settings dialog box. Once you’re happy with everything (you’ll see summaries of your current settings), hit OK to start the export.

Export Your Video for the Web

Regular export gives you the most control over the end result, but there’s also a Save for Web option that gives you a few presets. If you want a quick way to share the video by email or post on the web with small file sizes, this can be a good option. Or perhaps you just can’t be bothered messing with the complexity of the export options. But I don’t recommend it for making master video files. For that, you’re much better off making a much larger master file with much less compression.

The options are pretty self-explanatory. Before sending or posting, check the end resulting video to see if the settings are to your taste. The compression is pretty aggressive with these presets. 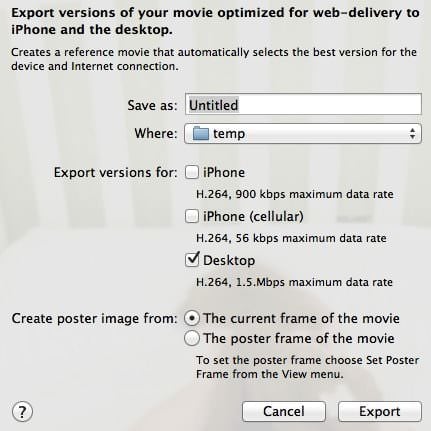 And that’s about it. Quicktime 7 Pro is a reliable and powerful way to compile time-lapse. But if you’re after more advanced editing, color controls, or effects like deflicker, you’ll have to head over to dedicated video editing software like Apple’s Final Cut Pro or Adobe’s Premiere.

How To Compile a TimeLapse with Quicktime 7 Pro