How to Delete Photos from Your iPhone to Free Up Storage

If you’ve deleted photos and videos and yet are still getting an error message saying your iPhone is running out of space, here’s how to delete photos from your iPhone to free up storage space. 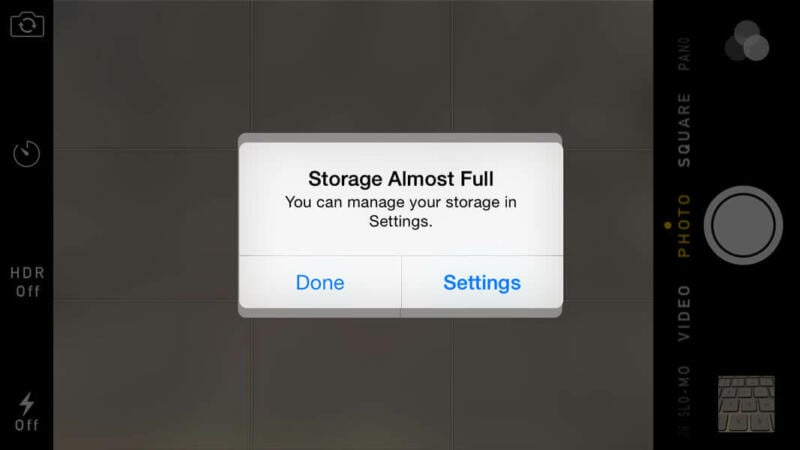 This is a how-to guide for something that really shouldn’t need a how-to guide. Deleting photos from your iPhone should be a cinch. And it is, in a kinda-sorta kind of way. But there’s a catch.

This was originally written when iOS 8 was out. Apple has since changed where these settings are and how they behave.

At first glance, deleting your photos is as simple as selecting the photos and hitting the trash can icon. But it turns out that that only gets you halfway there. And that creates a problem if you’re running out of storage space. It means you can’t take more photos. And if you really fill it up, you’ll start getting unstable behavior and the phone locking up.

And making things worse, the error message you get isn’t helpful because it takes you do a dead end. The warning message will tell you to go to your manage storage section in Settings. But you won’t find the solution there.

The message you get is “Storage Almost Full: You can manage your storage in Settings.” There’s an example at the top of this page. The Done button closes the message, while the Settings button will take you to the Manage Storage screen.

There are actually two places in the settings where you can manage storage. But we’re not concerned here with the iCloud storage–that’s a separate (albeit related) issue. The one we want is the storage on the actual phone. If you go to

But all you can do here is see how much data is being used. You can’t delete anything here.

The key to solving the problem is that deleted photos continue to take up storage space on your phone until you really delete them. Windows has the recycling bin. Mac has the Trash. The Photos app in IOS 8 has its own variation on Trash that only applies to photos and videos.

When you delete a photo on the iPhone it doesn’t actually get deleted. It just gets moved to a special album called Recently Deleted. The logic is fair enough–it’s a safety precaution against accidentally deleting photos you actually want to keep. And if you need to restore a photo or video, that’s most certainly a positive. But the execution could be much better.

Each photo and video in the Recently Deleted album is on a timer that starts at 30 days. Once that timer runs out, the photo or video will disappear forever. But while photos and videos remain in the Recently Deleted album, they’re still taking up space on your phone. And if you use the camera much, it’s very easy to run out of space. That’s great for Apple trying to convince you to upgrade to the next size up iPhone in storage, but not so great if you’re trying to take a photo.

The problem is easy enough to solve, but it’s not as intuitive as it could be. It involves an extra step. What you need to do is select the photos in the Recently Deleted album and delete them again. This time, you really are deleting them.

But first, it’s a good idea to make sure the photos you do want to keep are properly backed up. There are different ways to do that. Some of the most popular include the iCloud options that’s baked into IOS 8, the Carousel app from Dropbox, the Amazon Prime Photos app, or the Google+ app. Or just do a full backup of your iPhone through iTunes. I routinely use Carousel to back up all my photos in the background.

Once your photos are safe, here’s how to really delete the unwanted ones:

How to Really, Really Delete Your Photos

I have run into a situation that required even more drastic measures. At some point during restoring from backups and upgrading the operating system versions I ended up with several gigabytes of photos and videos taking up space on my iPhone that weren’t showing up in the Camera Roll, the Recently Deleted album, or anywhere else I could access on the iPhone itself. Apple tech support had me reset the phone and restore from backup, but that didn’t solve the issue either.

Somehow, somewhere something had gotten corrupted. So before I restored from backup, I had to go into the backup file and manually delete the photos. I strongly urge caution in doing this because it might well be possible to royally screw things up if you make a mistake. As a minimum precaution, it’s worth making two backups so that you have a fallback if something goes wrong.

On a Mac, the backup files are in ~Library/Application Support/MobileSync/Backup.

There are also apps that I haven’t tried but that might make the process easier (like this one).

There are two things Apple could do to make this all work better. The first is to have the error message point to the Recently Deleted album rather than a dead end in the Manage Storage settings.

The second would be to make the Recently Deleted album work more like the Trash on a Mac or Recycle Bin on Windows, where, if space is needed, the oldest items automatically get purged without waiting for the timer to run out.

At the time I’m writing this I’m using IOS 8.1.3. It’s entirely possible that this issue might be addressed in a future update to IOS 8, rendering this guide obsolete. Here’s hoping!

The steps outlined above aren’t the same thing as a secure wipe. The photos will no longer be accessible through the IOS operating system or in any new backups you make. But someone with access to your phone and the chops to scan its flash memory could probably recover quite a bit. If you need to do a secure wipe of your phone before selling it, or perhaps something incriminating mysteriously ended up on your phone, here’s a good place to start.

How to Delete Photos from Your iPhone to Free Up Storage