The Digital Foci Picture Porter Advanced is feature-packed. Here’s how it stacks up in real-world use for backing up photos without a computer while traveling.

If you’re traveling without a laptop, there’s a good chance that you’ll be looking for a way to get your photos off your camera’s memory card and into safe keeping. It both frees up your memory card to shoot more photos and provides a way to safely backup your photos so that you arrive home with the images intact.

There are several memory card backup devices available. I’ve reviewed most of the major offerings that are likely to be of interest to photographers. These devices combine a portable storage drive, a rechargeable battery, and a memory card reader.

The one I’m focusing on here, the Digital Foci Picture Porter Advanced, is the second Digital Foci I’ve reviewed. Last time, I tested their simpler, older, and cheaper Photo Safe II. The Picture Porter Advanced is a much more feature-rich and powerful device than the Photo Safe II. With its large screen and array of features, it’s more directly comparable to the HyperDrive Colorspace UDMA2. Here’s how it performs in use.

The device accepts CompactFlash (including UDMA cards), SD (SD, SDHC, SDXC), and microSD (microSD, microSDHC, microSDXC) cards directly. The microSD compatibility is something most of the other backup devices don’t have built-in; for most of them you have to use a microSD-to-SD adapter cartridge.

You can also plug in a USB thumb drive. 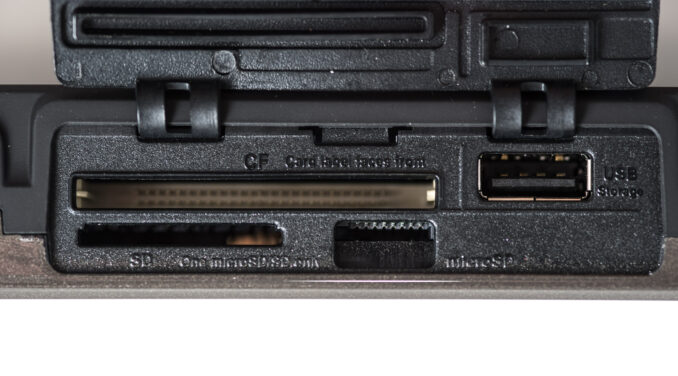 RAW Photo Formats. The Digital Foci Picture Porter Advanced supports an impressive range of RAW formats by being able to read the embedded preview image and apply very basic operations like rotation etc based on that JPG preview. That embedded JPG preview is also used for the thumbnails that you view on screen. It doesn’t render its own previews directly from the RAW data, and you can’t do any image editing like adjusting contrast, etc. It can read EXIF and IPTC information as well.

In addition to standard JPG from a GoPro, I used Nikon NEF, Canon CR2, and Adobe DNG (from a Ricoh GR II) RAW files. All worked as expected.

Video Formats. The device supports playback of video modes AVC/H.264 (.MTS) up to 720p/30fps and H.264-encoded .MP4 files at 720p/30fps. If you try to view higher-resolution videos, like those from a GoPro or other kind of camera, it won’t work and you’ll just get a question mark icon. So you can’t use it to play back 4K or even 1080p video, which makes this feature of limited use in today’s market.

The Picture Porter Advanced has the largest screen of any of the devices I’ve tested so far. It measures 5 inches diagonally from corner to corner, or about 4.3 inches (10.8cm) wide by 2.6 inches (6.5cm) high. It displays at 800×400 pixels. It’s not a touchscreen. The display is in color and is crisp.

When you first fire the device up you get a menu screen that looks much like a traditional computer menu with icons for the major functions and shortcuts.

When you’re viewing full-size images you can zoom in using plus/minus buttons to the right of the screen and move the zoom area around using the joystick. By pressing the display button you can get an overlay in the top right corner of the core EXIF details like camera model, pixel dimensions, and basic exposure information. Pushing the display button again changes the overlay to a histogram. Pushing it a third time puts both the EXIF information and histogram together.

By pressing the Menu button you also get a bunch of different options for the display such as being able to see the embedded IPTC information, filenames, or time and date. You also have some controls over whether the image fills the screen or fits within the screen.

Moving between images is a matter of flicking the joystick left or right. There’s a slight delay as the next photo is rendered for display.

And escape button moves you back up through the functions to the thumbnail display or further through the file management options all the way back up to the main menu.

Overall, the display provides a very good screen to preview your photos and is useful for not just checking exposure but also focus. 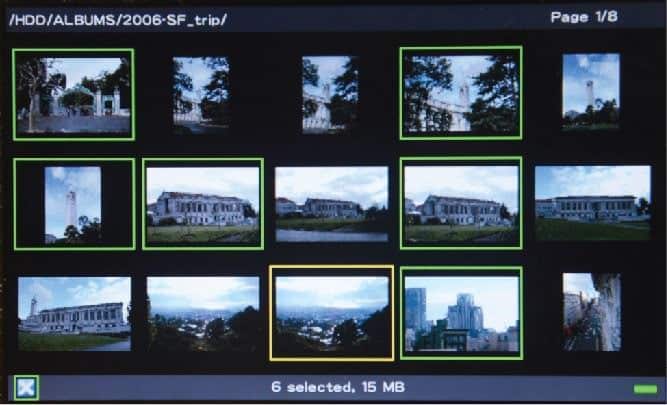 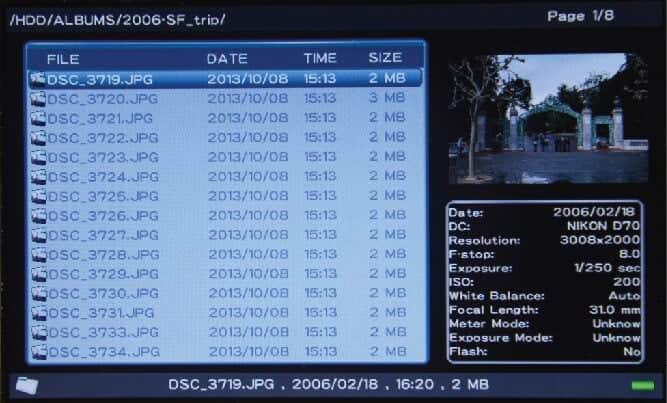 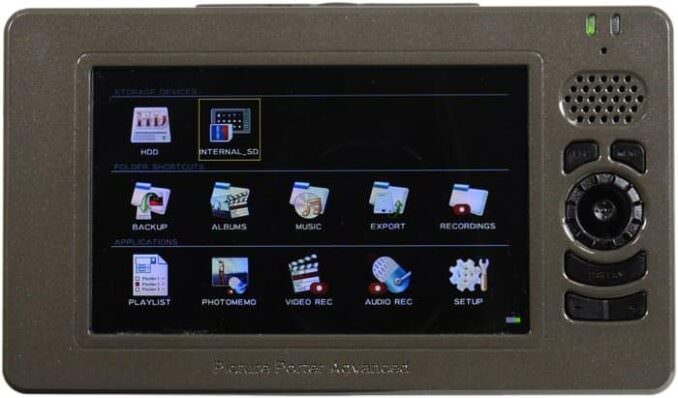 The screen isn’t a touchscreen. All of the controls, aside from the power button on the top, are handled with 5 buttons and a 5-way joystick arranged on the side. The joystick goes up, down, left, right, and clicks in as a button.

The controls work well enough and are quite intuitive. An escape button moves you back up through the menu or app levels, while the joystick moves within a menu or between photos. 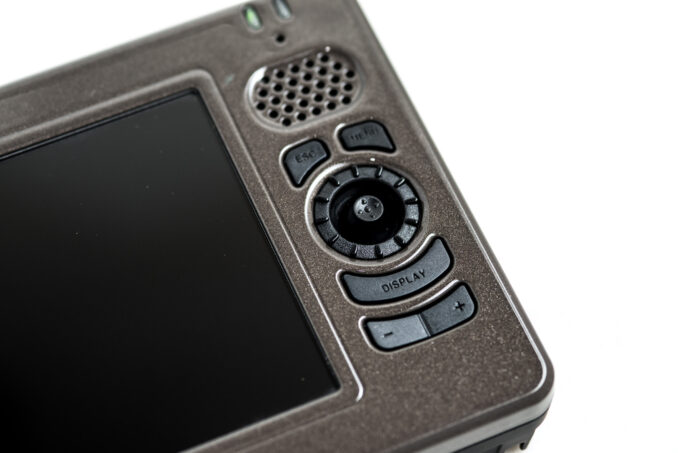 Digital Foci claims that you can back up 1GB or data from a CompactFlash card in about 1.2 minutes, or 1GB in about 2.2 minutes using the SD slot. Like most of the similar devices, the CompactFlash interface allows for faster transfer than the SD reader interface–it’s not the cards themselves but the actual interface.

In my own tests using SanDisk Extreme Pro CompactFlash and SDXC cards, I found that those speeds specs were pretty spot on. Which makes it not the quickest device–slower than the HyperDrive Colorspace UDMA2 and much slower than the NEXTO DI ND2901.

There’s no file verification function to provide added assurance that the backup was accurate, but you can of course browse the photos once they’re downloaded to the drive.

Other Features of the Digital Foci Picture Porter Advanced

Photomemo. The device also has what it calls a Photomemo function. With that, you can record voice memos and attach each one to an individual photo. I can see how it could be useful, but it’s not something I’d find myself using much.

Record Video. The device itself doesn’t have a camera built-in, but you can use it as an external recorder for another video device. But its functionality is pretty limited–it records the incoming signal as 640×480 resolution mp4 files at 29 fps. But chances are that if you’re in the market for an external video recorder you’ll need higher specs than that. 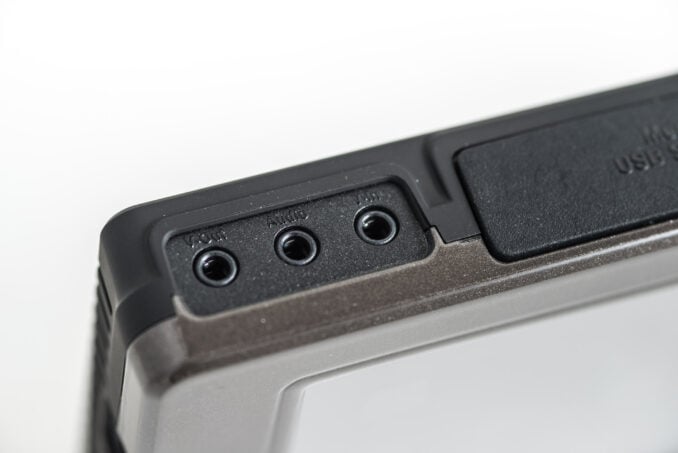 The device is marketed with either a 500GB or 1TB standard 2.5″ hard drive or with an SSD drive. The versions with standard HDD seem to be easier to find, but the SSD versions are available directly from Digital Foci in 250GB, 500GB, or 1TB configurations. You can find them here.

The version I tested had a 500GB HDD. I haven’t tried the SSD versions, but I reached out to Digital Foci tech support to find out whether there were any special considerations for using the SSD versions.

They mentioned two. One is that it’s quicker and more responsive when you fire it up because there’s no lag as the drive spins up. The second is that because of the different way that SSDs draw power, if the battery is running low you can get a situation where the device appears to be powered up and running but that the drive isn’t showing up. To fix it you need to charge the battery more or connect to AC power. Other than those two scenarios, the SSD apparently performs much the same as with an HDD.

You can plug in an external hard drive using the USB 2.0 connection. That means you can make a second backup of your photos, which adds a level of safety. You’ll need to be running the Picture Porter Advanced on AC power–the external battery functionality doesn’t work on just battery power alone even if the external battery itself can be powered directly from USB.

Taking a fully depleted battery to fully charged takes a bit over 4 hours with the AC charger. There’s a color-coded LED light to indicate charging status: red for charging and green for charged.

The AC charger is a 100-240V switching power supply that outputs 5V / 12W. The cable that plugs into it has a standard USB plug on one end, but the other end is a round plug, not a standard micro or mini USB.

The Digital Foci Picture Porter Advanced doesn’t have any built-in wireless capabilities. If you want wireless access to it as an external hard drive, you can connect something like a RAVPower FileHub.

It comes with an AC charger, a neoprene soft case, and oh so many cables, most of which are for various audio and video inputs and outputs. 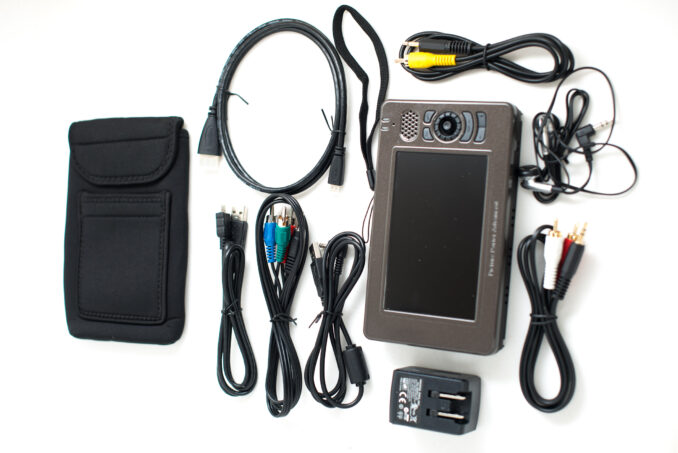 Spare batteries. It comes with a rechargeable battery pre-installed. You can also buy replacements or spares here.

Car charger. You can also get a car charger, available here.

The most direct competitor to the Picture Porter Advanced is HyperDrive’s Colorspace UDMA2, which I’ve reviewed here.

The Colorspace is quite a lot smaller than the Picture Porter Advanced, but not a lot lighter.

In my testing I didn’t run into issues. It backed up and performed as advertised. But it’s worth being aware that user reports of the device failing seem to be more common than one would normally expect. Recent firmware updates may have solved many of these issues.

I like that it takes microSD cards directly. That means less fiddling with microSD-to-SD adapter cartridges that are just one more moving part to lose. I like that the large color screen gives a good rendition of the images. And there are other bells and whistles that make interesting additions.

But the paradox I found with this device is that although it’s the most feature-rich of the memory card backup devices that are likely to appeal to photographers, it’s also one I’m not likely to use.

Some of that is because of its size—it’s bigger than I’d prefer to be carrying. Some of it is speed—it’s slower in backing up photos than both the HyperDrive ColorSpace UDMA2 and NEXTO DI ND2901. And the reports from other users of the device locking up also factors in. When I’m out on the road, I don’t want to be worrying about whether I can trust the device that’s supposed to safeguard my photos.

Overall, the Digital Foci Picture Porter Advanced has an impressive array of features, but to me it feels a bit like it’s a device that can’t decide what it wants to be. It does a lot of things reasonably well but doesn’t quite excel for any specific category of use.

Images and product information from Amazon PA-API were last updated on 2022-09-25 at 05:10. Product prices and availability are accurate as of the date/time indicated and are subject to change. Any price and availability information displayed on Amazon Site at the time of purchase will apply to the purchase of this product.