You can now use a video as your Facebook cover instead of a photo. Here’s a rundown of the requirements and options to make it work. 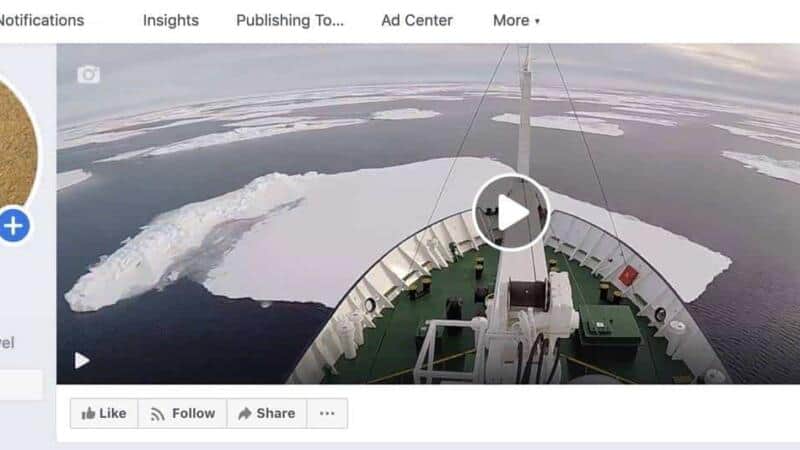 Here’s a quick rundown of the dimensions and options for selecting a cover video for Facebook. In this example I’m using a short time-lapse I shot of crashing through the sea ice in the high arctic, and time-lapses work well for this. As would slow-motion clips. But you can use any kind of video footage for the banner.1

Uploading a New Video or Selecting an Existing Video Clip

To add a video cover, use the same Change Cover menu that you’d use to change the cover photo. You have a choice of uploading a new video: 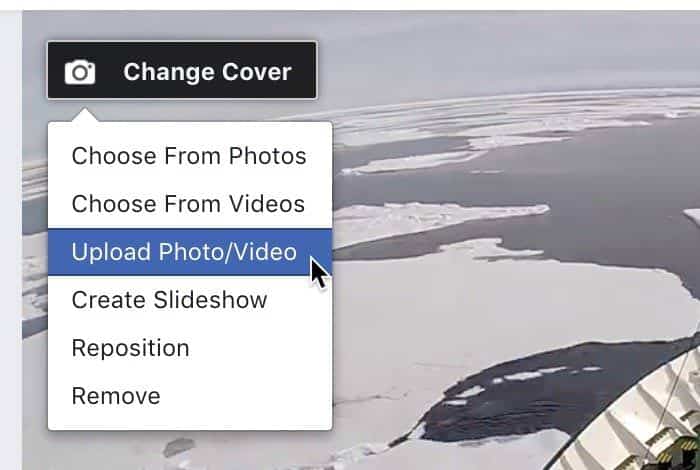 Or selecting from among the videos you’ve already uploaded: 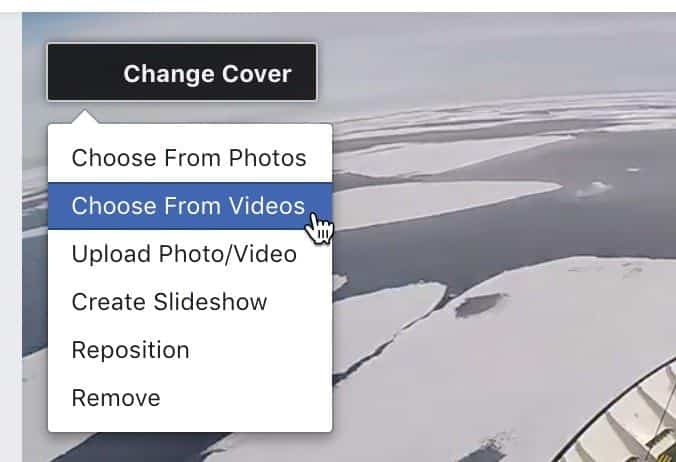 When you upload a video, Facebook converts the file. Quality loss is pretty much inevitable, because most of the time they’ll be converting it to a lower-bitrate and lower-quality version to make it quicker for users to view. You don’t have any control over that conversion process–it’s all automatic.

The video covers use the same area as the usual cover photos, so it isn’t a standard aspect ratio. And it displays at different aspect ratios depending on whether you’re looking at it through a web browser or through the mobile app.

The videos you upload must measure at least 820 by 312 pixels. The recommended size is 820 by 462. But you don’t have to worry too much about preparing the clip to exactly those dimensions, because it’s going to be automatically converted as part of the upload process anyway.

If you’re shooting a video clip for this using a camera that lets you choose the video resolution, the 720p mode would be a good place to start because that measures 1280 by 720, which comfortably has enough resolution.

It has no problem with higher-resolution videos. I’ve successfully uploaded 4K videos, so there doesn’t appear to be any problem uploading videos shot on most of today’s cameras. I haven’t tried uploading 8K video, but the cover banner area probably isn’t the best place to be trying to highlight 8K footage anyway.

The clips should between 20 and 90 seconds.

If you try uploading a longer or shorter video, you’ll get an error message like this: 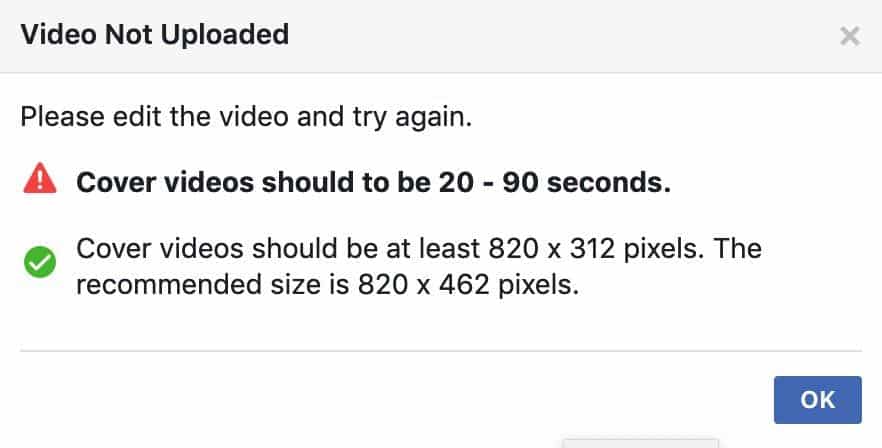 There are some options you can set as part of the upload process. These become available once the video has been uploaded and converted on Facebook’s end.

Repositioning. The aspect ratio used for the cover area isn’t a standard aspect ratio, so there’s a good chance you’ll be wanting to reposition the view. In practical terms, that’s a vertical positioning–not horizontal.

You can simply drag and drop to move it relative to the view window.

You can also reposition the video after you’ve published it by going to the Change Cover drop-down menu and selecting Reposition. 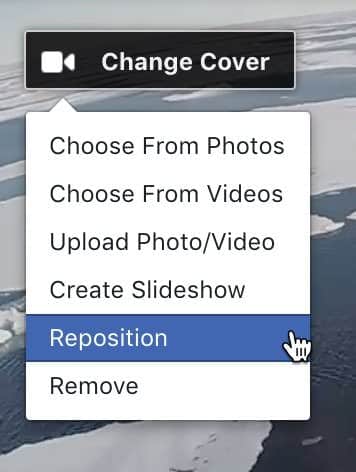 Looping. The videos will always autoplay on page load, but you can decide whether you want the video to play in a continuous loop. There’s a toggle switch at the bottom left of the upload window. Looping is enabled by default.2

If you’ve turned it off, once the clip finishes you’ll get a thumbnail image video and a large play button that the user can click on to play the clip again.

Sound. This isn’t an option because you can’t change the behavior, but since it’s related, I’ll mention it here. The videos will play automatically when the page loads, but the audio will be muted automatically. Users have to manually unmute it with the audio button at bottom right to get the sound.

Thumbnails. You can also assign a thumbnail image. If you’ve got the looping option enabled, this (mostly) doesn’t have any practical effect. But if you’ve turned the looping off, the thumbnail will be used when the video stops.

You’ll have a choice of 10 automatically chosen thumbnails grabbed from throughout the clip. You can use the arrows at each side of the frame to move between the thumbnails, and you have the counter showing the status in the top right.

There’s no option to upload a separate JPG to be the thumbnail image.