If you have a lot of photos in your Wordpress Media Library and are looking for a better way to organize them, the WP Media Folder plugin provides a way to create virtual collections without messing up your underlying filesystem. 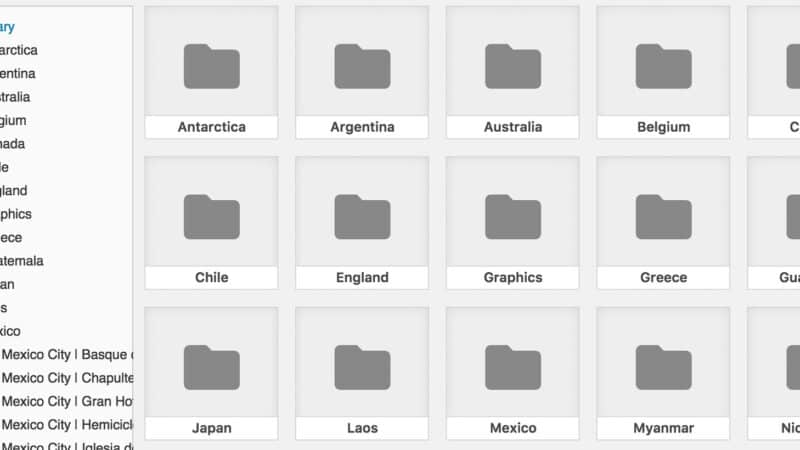 If you’ve spent more than a few seconds on this site, you will have noticed that I like to use a lot of photos in my posts. Whether it’s photos from locations or close-ups of gear for reviews, I like being able to use a photo. I am a photographer, after all.

The result is that my Wordpress media library has a lot of images in it. And while I’m pretty good about using meaningful filenames and titles and the media library’s search function can be very useful, I found a lot of times that with the standard search filter it was taking too long to find what I was after, especially for images I’d uploaded years ago. The media library’s interface also isn’t well designed for finding and filtering images.

Databases are supposed to make folders and directories obsolete, but there are times the old-fashioned folder hierarchy organization can be a lot more efficient. I’m so used to filing data in folders that it’s just a natural way for me to find things. So I wanted to find a way to put the uploaded images into folders that I could then find much more easily later on if I needed to use them again.

After trying several of the many media library enhancement plugins available—and there are a lot of them—the solution I’ve settled on is the WP Media Folder plugin by JoomUnited. There are other plugins with similar names, which are often quite different. This is a premium plugin, which means that you have to buy a license fee.

First, though, to clarify a key point: by default, uploads to the Wordpress media library go into filesystem folders by year and month. The dates used are from when the file was uploaded, not when the image was created. You can override it to one big folder if you like, but you have to go out of your way to do that–that’s not the default approach.

The WP Media Folder plugin never touches your filesystem. So the files are never moved on your server, and they keep getting uploaded exactly the same way they always have. The advantage of that is that you’re not locked into anything. If you decide to stop using the WP Media Folder plugin, your images will stay right where they are, and the embed URLs will stay exactly the same in your posts, so you won’t get stuck with a bunch of broken image links.

What the WP Media Folder plugin does is create virtual folders in your media library. And by folders, they’re really a virtual collection. And you can have nested folders–in other words, folders in folders. On one of my sites, for instance, I have them sorted by country and then location, such as Australia / Sydney Habour at Night. Here’s an example of the top-level folders: 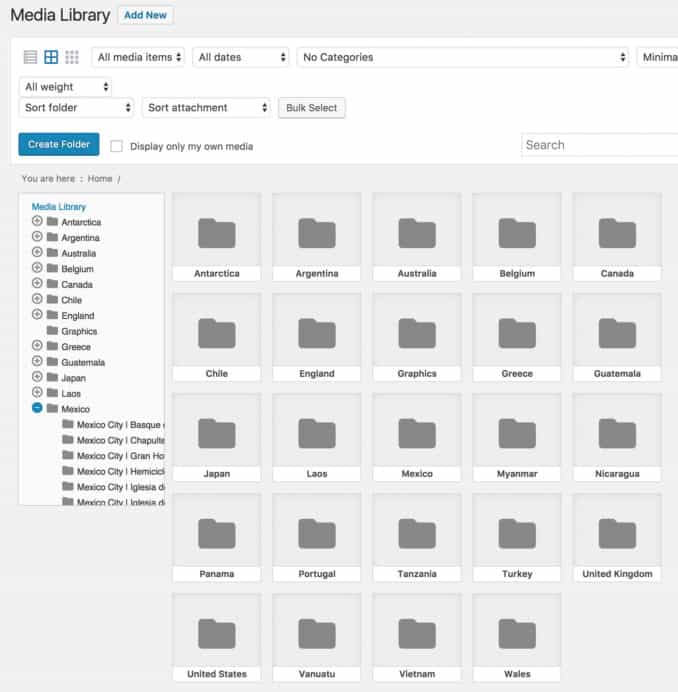 And then, if you drill down into each one, you can have subfolders. And, as you can see, you can also add thumbnail cover shots. The collapsible text menu at the left is also fully functional. 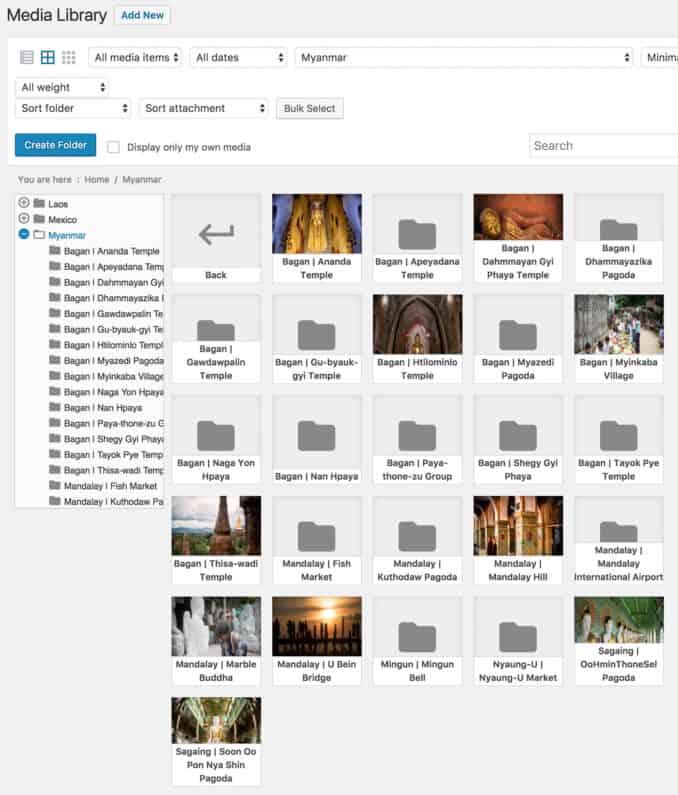 I’ve had to contact the developers a couple of times about small glitches, and they’ve been super-responsive in fixing them. So I’ve been very impressed with the support.

You can find more information on it here.

One of the great things about this solution is that it’s compatible with Jordy Meow’s WP/LR Sync, a combination of plugins for Lightroom and Wordpress that lets you upload directly from Lightroom to Wordpress as a Publish Service. I’ve written about it before.

He’s released an add-on that makes WP Media Folders folders visible in the Lightroom Publish Service created by WP/LR Sync. There are limitations–if you update directly in the Media Library, for instance, you can’t currently sync back to Lightroom—but if you’re already using WP/LR Sync, it’s a very handy add-on. You can find more info about it, along with the download link, here. 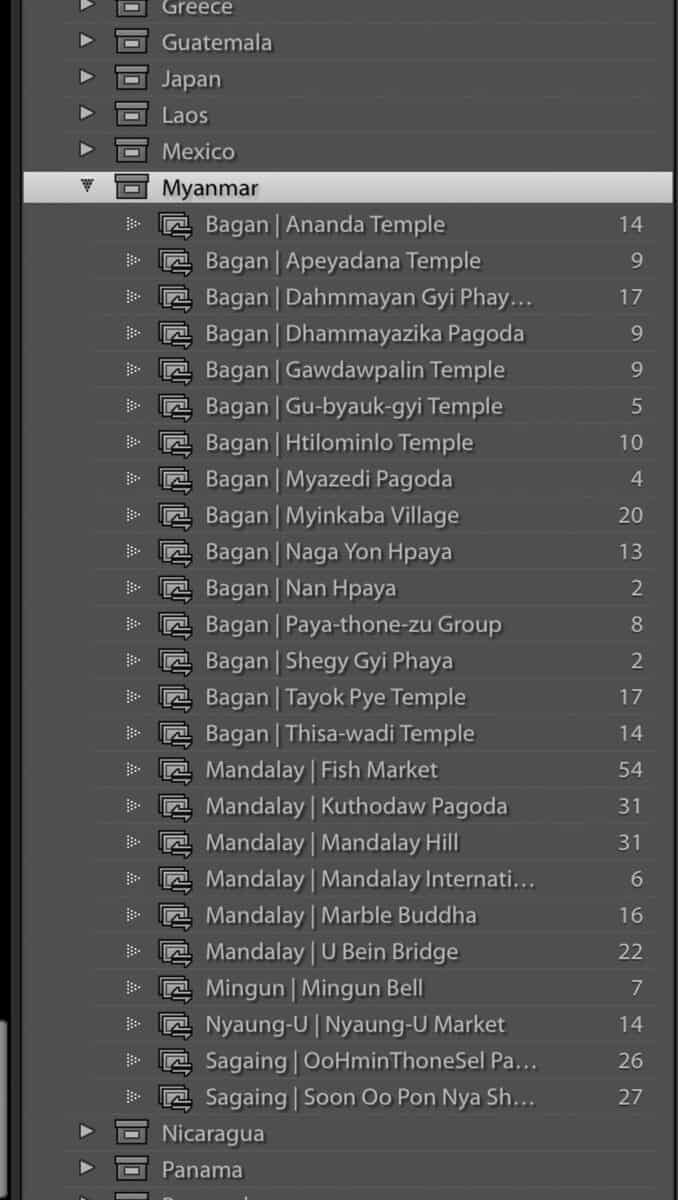 Overall, this combination has been the setup I’ve been using on several sites for a while now, and it’s working really well for me. And while it’s not free, it has well and truly paid for itself many times over in saving me time trying to find the photos I’m looking for much more quickly.