Here are some good options of you’re looking for a free Lightroom alternative to manage and process your photos. 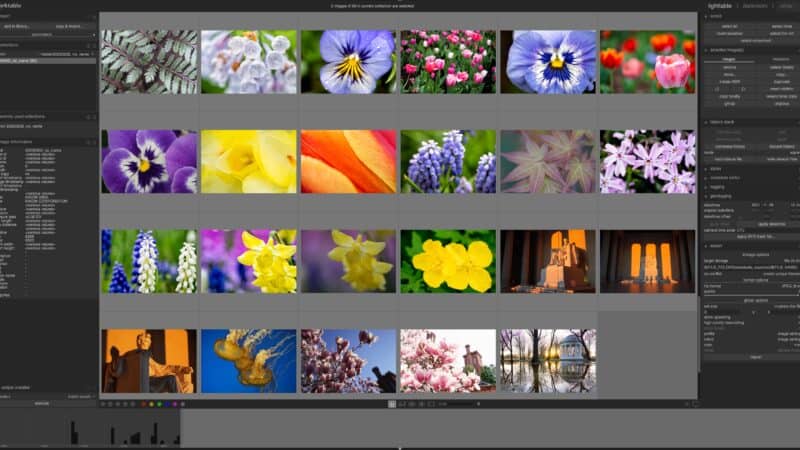 While Adobe’s Lightroom Classic is the biggest player in this space, it’s not the only one. And for various reasons–maybe being put off by the subscription model or perhaps wanting a feature or quality setting that Lightroom doesn’t offer–it might not be the best option for every photographer.

There are some excellent paid Lightroom alternatives. Capture One, Luminar, Exposure X7, and ON1 are all strong contenders, and if you’re looking for the closest competitors to Lightroom, those are good places to start.

But what about free Lightroom alternatives?

It turns out there are some impressive free apps that offer similar functionality–at least in part–to Lightroom. And those are the apps I’m focusing on here.

There aren’t many–it’s really down to two or three apps–but what’s most surprising to me is that these are as full-featured and as impressive as they are considering there’s no financial incentive driving them.

So if you’re after a free Lightroom alternative, these are well worth a look.

My pick for the best free Lightroom alternative is Darktable. Aside from being free, it’s open source and cross-platform.

Of the free Lightroom alternatives here, it is the most polished, well-rounded, and full-featured.

It uses a built-in database for image management and includes a very deep toolbox of settings to edit the images. There’s scripting support (LUA) for customizing aspects of the software, as well as some specialized bundled tools such as HDR compiling and astrophoto denoising.

And, like Lightroom, Darktable also has a map module (and geotagging support), a print module, and tethered shooting support.

Overall, while it’s not as polished and user-friendly as Lightroom Classic, and it lacks some of the basic functionality such as third-party plugin support, publish services, and a companion mobile version. Despite that, Darktable comes the closest among the free Lightroom alternatives available.

I have a more detailed overview of Darktable separately.

RawTherapee focuses tightly on its RAW image processing. Instead of a database digital management system, it relies on a file browser that’s directly accessing your hard drive’s native structure. (But RawTherapee plays nicely with asset management app digiKam (which is also free).)

But when it comes to RAW image processing, RawTherapee is very strong. Albeit in a very technical kind of way. It makes available a huge number of very granular settings, so you can tweak the processing to your heart’s content.

The downside of that is that it’s not especially quick or intuitive, and there’s a pretty steep learning curve involved to get the most from it. It feels much more like a very large toolbox of tools, but it’s mostly up to you to figure out how to use them.

In general, I’d recommend RawTherapee for technically-minded photographers who are inclined to milk every last drop of image quality out of their RAW files and don’t mind spending some time finding the right combination of settings to do that. Of course, it can be used by less technically savvy photographers, but the steep learning curve to get the best results might well put those users off.

I have a more detailed overview of RawTherapee separately.

While it can do some basic processing of RAW files, that’s not where its strength or focus lies.

Instead, its emphasis is on powerful catalog-based organization and filtering. It allows you to use albums, tagging and keywords, as well as geotagging. And it works well with very large collections of images, making searching, finding, and sorting of them much more manageable.

It can also be used alongside other apps, which was the traditional approach before Lightroom came along and combined RAW processing with catalog-based organization.

Lightzone has been around a long while, but its development has slowed markedly in recent years. At the time of writing, the most recently released version of the software was put out in April 2021. Their website seems to have gone offline sometime around late-January 2022. It’s unclear whether it’s a temporary outage or something more permanent. You can find the GitHub project here.

These aren’t Lightroom alternatives, as such, but they are free apps that perform some related, more specialized tasks related to working with RAW image files.

DNG Converter is a utility for converting other RAW file formats to Adobe’s DNG format. Lightroom can do this as part of its import process; this extracts the tool into a standalone app with a single purpose. This can be useful for creating archival versions for long-term storage or as a workaround for compatibility issues.

ExifTool is a free utility developed by Phil Harvey that works with file metadata, including that encoded with RAW image files. It’s the gold standard in terms of the image metadata it can access, but by itself, it’s not the most user-friendly tool, so many users might prefer one of the versions that adds a more user-friendly interface on top, such as jExifToolGUI (Windows, Mac, Linux) or ExifToolGUI (Windows). It’s free and platform-independent, and you can find pre-compiled distributions for Windows, Mac, and Unix.

IrfanView is a long-time favorite photo editing program and is surprisingly powerful, although accessing that power isn’t always as user-friendly as it could be. It’s for Windows.

XnView MP is another long-time free favorite that is very powerful for opening and viewing a huge variety of image file formats. There’s now a cross-platform version that works on Windows, Mac, and Linux. A related tool they put out is XNConvert, which is one of my go-to tools for converting image files between formats.

This venerable app has long been a free alternative to Photoshop. You can find it here.