Sometimes you need to choose which of several similar search terms to emphasize for SEO. Rather than relying just on your gut instinct, here's how to use actual data with Google Trends. 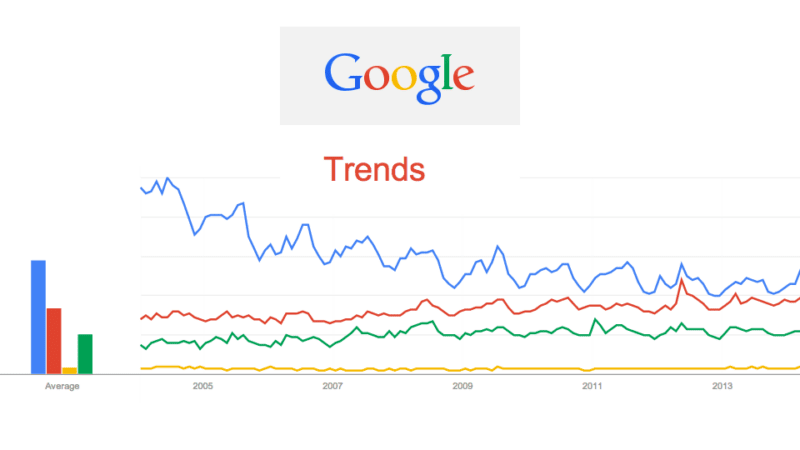 Working out what keywords to emphasize on a web page can be a complicated business. Known in the SEO world as keyword research, it involves relevance, context, competition, and search term popularity, among other factors to optimize a page for particular search terms. There are all-in-one services that package all of this together to help you identify opportunities, like Ahrefs or SemRush (both involve subscription fees), with promises to increase your organic search traffic.

That kind of full-scale content marketing can be very useful. And expensive. But there are times you need something simpler. As in, really simple. Even when you’ve settled on a keyword search term, sometimes you need to whittle it down a little more, something that will help you choose between two similar search terms. This is only a small part of the process, but it can be an important one. It’s not much good if I’m using one search term and potential visitors or clients are searching for the other.

This is where Google Trends can help. It’s free, and it’s super-simple to use. You probably wouldn’t use it for full-blown SEO keyword research, but it can come in very handy for some quick data in choosing between two similar keywords, which is how I usually use it. Basically, it can tell you how one search terms is relative to another (or several others). Here are two real-world examples.

Google Trends is part of the suite of tools Google makes available for webmasters and ad buyers. It taps into the vast treasure troves of data that Google accumulates on people’s Google searches. It’s free and you can use it without a Google account.

When you first go to Google Trends, you get a page with several panels displaying recent search trends from across the web. Just as “trending on Twitter” you the hashtags that are being used most at any given time, Google trends shows you what search terms people are using most. In short, it shows you what the most popular search terms are.

When you go to the Google Trends landing page, you’re given a bunch of panels with various real-time search trend examples, and it’s not necessarily self-evident to do what next. That search bar at the top looks like a regular Google search bar. It isn’t. It’s actually one focused purely on search terms. And that’s where you put in the terms you want to compare, with a comma separating them. You can compare up to five search terms.

I did a post on memory cards for the GoPro Hero3 camera. It’s pretty self-evident that one of my most important search terms is going to be the GoPro camera.

But there’s more than one way to search for that. The GoPro company officially renders the model as GoPro HERO3. But are more people searching for the way it’s rendered officially, “gopro hero3”, or by breaking it out separately to “gopro hero 3”? That single space might not seem a bit pedantic, but it can actually make quite a bit of difference in how many people find your page.

And you can see the difference in action by doing a search for each. While there’s a lot of overlap in the results, they are not exactly the same. And one search returns about 20 percent more results than the other.

To get some actual empirical data on which version I’m better off using in my content, I go to Google Trends and type in the options in the search bar at the top of the page.

You’ll then go to the results page.

The keywords (or keyword phrases) you want to compare are displayed at the top. You can also add a term using the “+Add term” button.

Each keyword is assigned its own color, with thin vertical lines to the left of the keyword that correspond to the colors used in the graphs. 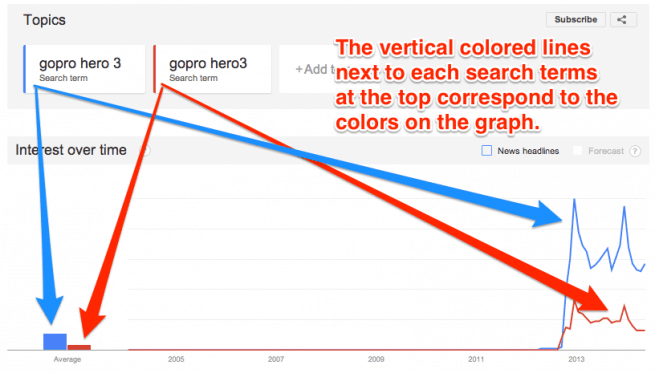 In the Interest Over Time panel there are actually two graphs. At left is a bar chart of the overall average that shows the relative popularity of one keyword or keyword phrase to the other. 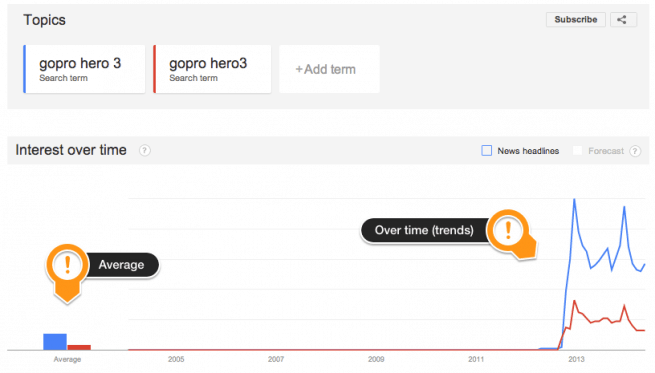 In this example, both charts clearly show that the search “gopro hero 3” is significantly more popular than the search for “gopro hero3”.

At right is a more detailed breakdown mapped over time. It defaults to 2004-present, which isn’t especially useful for a product that’s only existed for a couple of years. But using the drop-down selectors above the chart you can change it to something like the past 90 days. You can also choose specific regions, if you like. 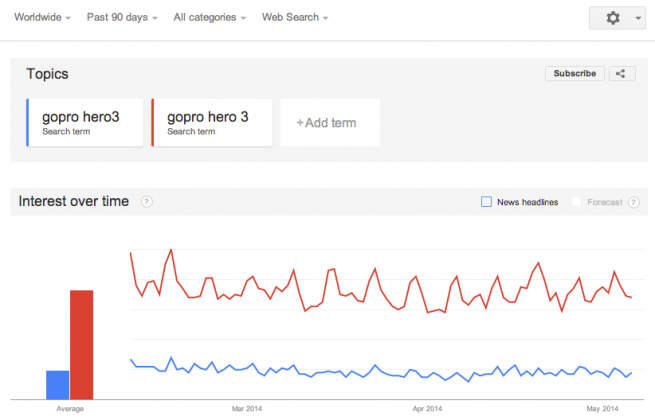 If you roll the cursor over the lines you’ll get a popup of points in time. In this example you can see a spike in searches in the December 2013. That wasn’t long after GoPro released a new model, just in time for the holiday shopping period, so interest was at a peak then. For another illustration, the graph used at the top of the page as the article header compares “blue car” with “red car” with “green car”, etc. You can see that searches for “blue car” are actually becoming relatively less common over several year, while searches for “red car” are becoming relatively more common. 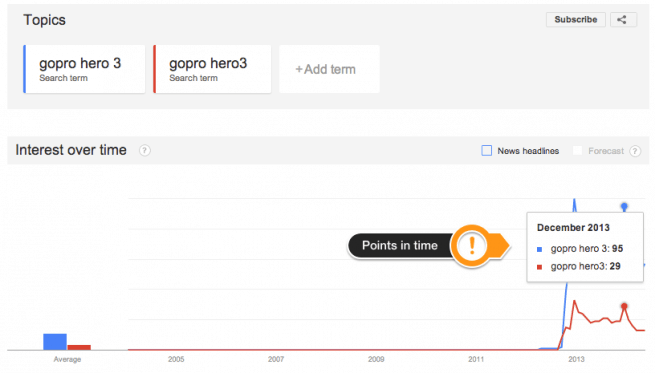 You can also toggle the option to integrate news reports. Things like breaking news, major reviews, etc, show up here. 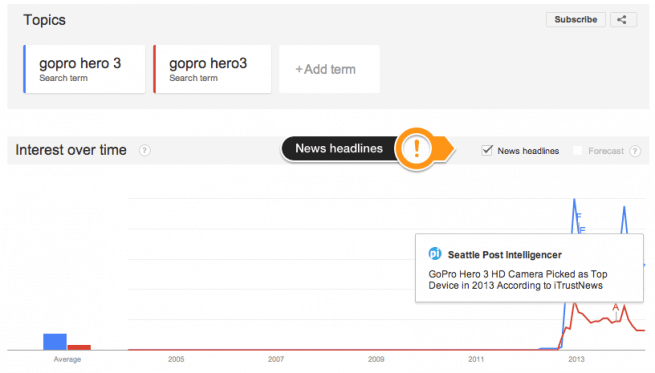 You can compare up to five different keywords or search terms. In this example, you can see that the blue and green ones are far more popular than the others. So I can eliminate three of the search terms. 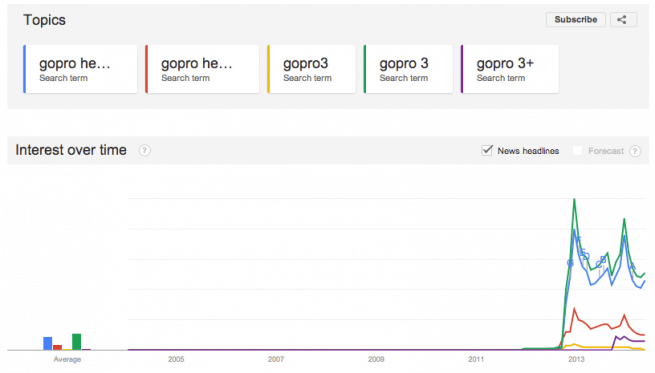 That leaves me the two most popular variations: “gopro hero 3” and “gopro 3”. Neither of those are exactly how GoPro officially renders it, but those are the search terms that people are using most commonly in relation to those cameras. So I am much better off using “gopro hero 3” in my post than “gopro hero3”.

Here’s another example based on the name of one of the oldest and most famous of Istanbul’s landmarks, Hagia Sophia. It is actually known by several names. Hagia Sophia is actually it’s Greek name. In Turkish it’s known as Aya Sofia. And there are also other variations, including Haghia Sophia, Sancta Sophia, and Aya Sofya.

So for my post on Hagia Sophia as well as in keywording my photos, it’s very helpful to me to know what variation most people are searching for. 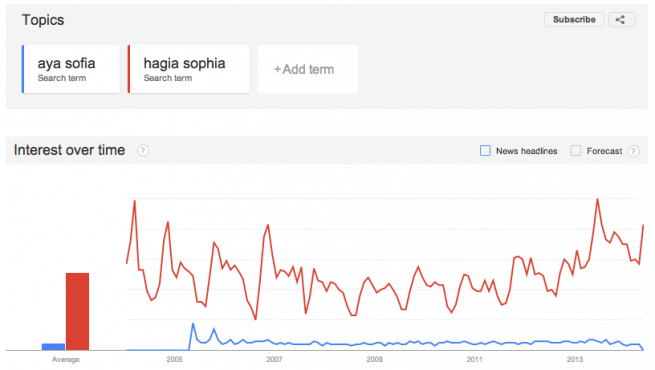 As you can see in the results, “hagia sophia” is much more common than “aya sofia”.

Below the Interest Over Time panel, you can also see where it’s used most commonly in the Regional Interest panel. This can be helpful if I’m targeting a particular geographical region. “Hagia Sophia” is far more commonly used in more places than “Aya Sofia”. So in overall global terms, my best bet is to use “Hagia Sophia”. But if I was targeting an audience in the Netherlands, I’d be far better off using “Aya Sofia”.

And below that there’s another panel on Related Searches that can be very helpful as well.

Google Trends won’t give you any absolute numbers on searches, only relative ones. To get absolute numbers, you have to use something different, like the Google Adwords Keyword Planner, which is really designed for crafting Google Ads. Another option is Wordtracker. (Both require you to log in.) Even better are full-fledged SEO services like SEMRush and Ahrefs. They give you the average number of searches for a term as well as an idea of the competition for that keyword. Using the same search terms from Example 1 above in Google’s Keyword Planner provides even more data on the terms and confirms the relative comparison that trends gave.

It’s also worth mentioning some qualifiers. It might be that I actually want to optimize my page for the keyword that isn’t searched as commonly because not many other pages are optimized for them (ie. there’s less competition).

And the search engines do use synonyms. Things like “image” and “photo” are functionally the same in many searches (but not all). But the search engines don’t publish those lists of synonyms or how they’re used, so it’s safer not to count on them too much. As an easy example, both “gopro hero 3” and “gopro hero3” refer to exactly the same thing–they’re perfect synonyms–but as you can see from above, the search results they return are not exactly the same. So I would much prefer to try to pick the best synonym from the get-go.