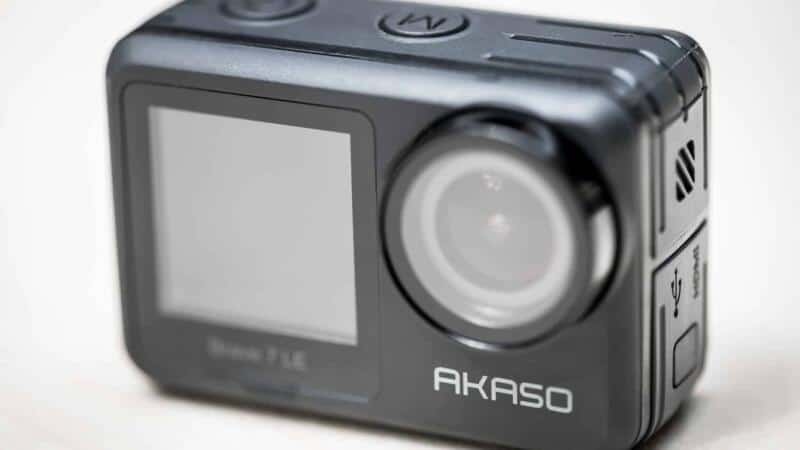 The AKASO Brave 7 LE doesn’t come with a memory card as standard. Some retailers might include one in a special bundle deal, but unless you happen to get one of those, you’ll have to pick up an SD card separately.

An SD card that’s too slow will limit which of the camera’s features you can use. At the same time, there’s no need to pay top dollar for the fastest microSD cards that money can buy.

So here are some practical recommendations for which SD cards to get for the Brave 7 LE. I have some quick recommendations at the top, with more detail in the section below.

Any of these make for a good choice. If you’d like more detailed recommendations or cards from other brands or different models, you can find them below.

The BRAVE 7 LE has a relatively low maximum video bitrate compared to some of its current competitors. With a maximum bitrate of 60 megabits per second (60 Mbps), it’s well below the 100Mbps of the most recent GoPro and DJI action cameras (but you only have to go back a few models of GoPro to see 60 Mbps on those cameras).

The upshot of the 60 Mbps maximum video bitrates is that you don’t need the latest and greatest SD card that money can buy. And you don’t need to pay an arm and a leg for it–there are very capable cards that will work well and that are affordably priced.

I make a point of buying as many different models of microSD cards as I can and running them through my own independent speed tests. You can find those here.

The AKASO Brave 7 LE takes microSD cards. That’s the smaller, thumbnail-size card rather than the larger SD card format. There’s a single slot, so you can use one card at a time.

Once you get beyond that, the manual is both vague and contains confusing errors, which is quite unhelpful. This is what it says:

On top of that, different parts of that guidance conflict with other parts. For instance, a 64GB card is a microSDXC card and is formatted in exFAT, not FAT32. I’ve personally tested 128GB, 256GB, and 512GB cards in it and found them to work well. You’ll have trouble finding a card that is Class 10–and only Class 10–these days. Most of them are rated for newer, faster speed ratings such as U1, U3, or V30 (or higher). Those newer, faster cards will also work well in the camera and are much more readily available at many retailers.

So, trying to untangle all of that, combined with actually using the cards in the Brave 7 LE in real-world shooting.

Detailed Recommendations on SD Cards for the AKASO Brave 7 LE

Here’s some more detailed information on these cards, including direct links to where you can buy them.

Fast, cost-effective, reliable, and widely available, the SanDisk Extreme cards are safe bets for a wide range of uses, including the AKASO Brave 7 LE.

The latest version of the SanDisk Extreme comes in 64GB, 128GB, 256GB, 400GB, 512GB, and even new 1TB versions. While AKASO's official guidance only mentions cards up to 64GB, the guidance is somewhat garbled, and I've used cards up to 512GB without running into any issues.

Samsung makes several models of microSD cards, and more than one model will work well in the Brave 7 LE. But they have a somewhat confusing naming system that doesn't always make clear what the difference between the models is.

The EVO Select is one of their better cards but is also very cost-effective. Like SanDisk, Samsung recycles the series names.

This is the latest version of the EVO Select--it's a blue/teal color. It's a little faster than the previous model, but the older green/white/gold version still works well in the EK7000 and EK7000 Pro.

It's available in storage capacities from 64GB up through 512GB and includes an SD adapter.

Find them at: Amazon 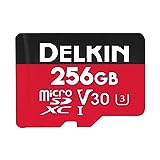 Delkin Devices have been making memory cards for a long time, and very good ones at that. But it's only recently that they simplified and streamlined their product lines to make it clearer what the differences are between cards. The Select line isn't their fastest line--that is the Power V90 line--but the Select series are rated for V30 and are good combination of being fast enough for this camera and cost-effective.

This card is rated for V30 and has a UHS-I interface. It's available in sizes ranging from 16GB up through 512GB.

Why Do You Need a Fast SD Card in the AKASO Brave 7 LE?

Fast memory cards don’t make you a better photographer or improve image quality, but a card that’s fast enough for the camera will let you take full advantage of all the camera’s features.

If you try using a card that’s too slow, you might run into issues when recording video. If the card can’t keep up with the 60 Mbps data stream from the camera, it can lead to errors, stopped recordings, dropped frames, or lockups.

The most demanding shooting modes on the Brave 7 LE are 4K and 2.7K video. If you’re not using those modes, you can get away with slower cards.

A common source of confusion with the speed of memory cards is the difference between Mb/s and MB/s (or Mbps and MBps). It’s a little thing, but it matters.

Unfortunately, that’s not the end of the story. It would be nice and easy if that meant that you could just make sure your card had a write speed faster than 7.5 MB/s, but there are other factors that come into play, including inflated manufacturer speed ratings, sustained speeds vs peak speeds, and the role and overhead of host devices and connections. All of this means that it’s best to stick to cards that are known to work rather than try to cut it too fine with measurements.

What’s the Difference Between microSDHC and microSDXC Cards?

The SDHC and SDXC parts don’t refer to a performance rating. They refer to the kind of storage formatting they use (microSDHC cards use FAT32; microSDXC cards use exFAT). These are specifications adopted by the SD Association. Technically, the distinction doesn’t refer to the storage capacity of the card, but in practice, SDXC applies to cards that are 64GB and larger, while SDHC applies to cards between 4GB and 32GB.

The Brave 7 LE is compatible with both the microSDHC and microSDXC formats, so you can use either. But because the high-bitrate video modes burn through storage space, you’ll most likely be focusing on cards that carry the microSDXC label.

microSDHC (Secure Digital High Capacity) is a design specification that refers to SD cards that are between 4GB and 32GB in capacity and formatted with the FAT32 filesystem. FAT32 supports individual files up to a maximum of 4GB.

microSDXC (Secure Digital eXtended Capacity) refers to SD cards with a capacity larger than 32GB and with a maximum theoretical limit of 2TB. They’re formatted in the exFAT filesystem.

In practice, you’ll see only a negligible difference in terms of performance. But there is one aspect where you will see a big difference: microSDHC cards are 32GB or smaller while microSDXC cards are 64GB or larger.1

Just like the larger SD cards, microSD cards are assigned a class rating that refers to their speed in writing data. Specifically, it refers to a minimum average performance, not maximum peak performance. Each category is designed to correspond to a real-world video recording use (examples are 4K video or 8K video). These apply the same to microSDHC and microSDXC cards.

Where things get a little complicated, though, is that these speed ratings don’t necessarily reflect the absolute speed of the card. Put another way, a card that has a V30 rating isn’t necessarily faster than one that has a U3 rating. That’s because to display the rating on the card, the manufacturers have to have their cards certified for that rating. It also involves revising packaging and marketing materials, which is an expensive process. So not every manufacturer will go to that trouble and expense right away. The upshot is that it’s not as simple as just looking at a card with a V30 or even V60 rating and knowing that it’s faster than one that only carries a U3 rating. It might be, but the rating system doesn’t work quite that way. You can see evidence of that in the speed test results on this page, with some cards with a lower speed rating being faster in testing than ones that display a higher speed rating on the packaging.

V90. The V-class is a new designation created to designate cards that are designed to work with the speeds required for 4K video and faster. The SD Association added some lower numbers to make them backward compatible with the older class designations (eg. Class 10 and Class 6), but the most important ones are V30 and above.

Memory cards in the V90 class are rated to support a minimum sequential write speed of 90MB/sec. Their primary market is for cameras that shoot 8K video. Cards rated for V90 will work in these cameras, but it’s also overkill–with a UHS-I bus, the Brave 7 LE can’t take advantage of the card’s UHS-II interface.

V60 is applied to cards that support a minimum sequential write speed of 60MB/sec.

V30 is applied to cards that support a minimum sequential write speed of 30MB/sec. These are designed to support at least full HD video and some 4K video cameras.

U3 is designed to support 4K video recording at a sustained video capture rate of 30MB/s. This class overlaps with the newer V30 class. That is, cards can have both U3 and V30 printed on them.

If the card has any of the following ratings and it doesn’t carry one of the ones listed above as well (the card might have Class 10, U3, and V30 at the same time, for instance), there’s a good chance it’s not fast enough for the Brave 7 LE: U1, Class 10, Class 6, Class 4, Class 2.

There is another kind of speed rating that some newer cards are sporting. It starts with an A, such as A1 or A2. You can ignore that for these purposes. That’s a parallel rating system that applies to a different kind of write speed that’s relevant to app devices but not video recording. (I have a more detailed explanation of the A1 and A2 ratings separately.)

Images and product information from Amazon PA-API were last updated on 2022-07-04 at 16:08. Product prices and availability are accurate as of the date/time indicated and are subject to change. Any price and availability information displayed on Amazon Site at the time of purchase will apply to the purchase of this product.