There are advantages to using an Arca-style quick release plate with a GoPro, and yes, such plates do in fact exist. 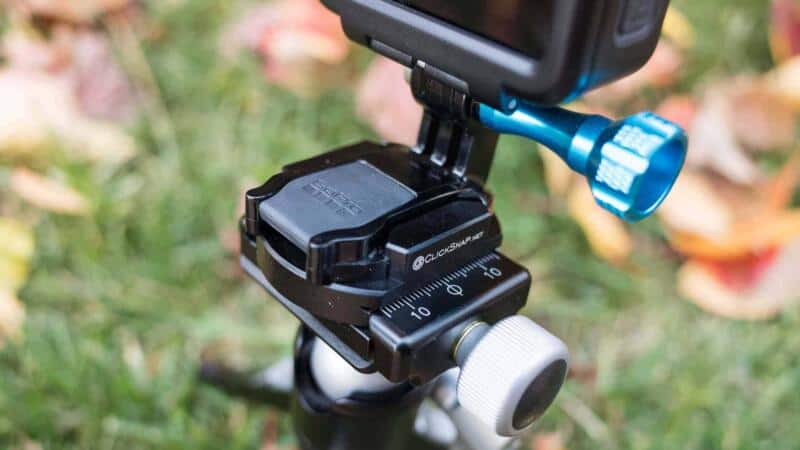 With my larger cameras, I use Arca-style quick release plates for attaching the camera to tripods, monopods, or other mounts.

They’re a very useful and versatile design, and it’s a lot simpler to have a single mounting system in your camera bag. So I was wondering whether it’s possible to get Arca-style quick release plates to attach to GoPros.

They exist! There’s not much to review here. It’s not exactly ground-breaking technology. But I found some recently and they’ve been making things easier for me when mounting a GoPro on my regular tripod attachments.

UPDATE: The precise one that I’ve been using doesn’t seem to be available anymore, but this one is much the same. 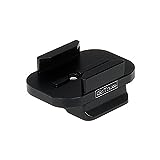 Why not just use the usual GoPro tripod adapter? They’re inexpensive and they work and they’re about the simplest GoPro accessory there is. But there are three things about them that I’ve never been really satisfied with.

One is that they’re not quick-release adapters. Screwing in the GoPro screw mightn’t seem like much, but when things are happening fast, or if your hands are cold and wet, it’s something that can be eliminated.

Secondly, and more importantly, I’ve found that the standard screw-type adapters have a tendency to come loose when the camera is mounted on something that’s moving. It not only misaligns the framing of the shot, but it also risks the camera coming off and being damaged or lost. On some tripod screws that are just a fraction longer than others, it can also be hard to get a tight lock in the first place.

Thirdly, It’s hard to get a perfectly aligned mount with them. You’re at the mercy of the thread on where the alignment comes out when it’s tight.

So as simple as it might seem, I’ve found that these Arca-style clips solve all three problems in one hit. I use Arca-style QR adapters on all my other cameras, so it makes sense to be able to use them on my GoPros as well.

There’s not much to it. It’s a clip. It’s machined alloy, light and strong. And it works. The downside is that they’re significantly more expensive than the usual tripod adapter.

It works with the standard GoPro squeeze clips that come packaged with the cameras.

So it’s pretty simple. But in case you’re wondering, like I was, whether such a thing exists, yes, they do. I now keep it in my bag as a standard. It’s easier to align straight. It’s rock-solid with no risk of twisting or loosening. And if I want to screw onto a regular tripod stud and bypass the QR attachment or bolt to the wall, I can.

The one I’ve been using doesn’t appear to be available anymore, but this one is functionally the same.

Images and product information from Amazon PA-API were last updated on 2023-02-03 at 22:48. Product prices and availability are accurate as of the date/time indicated and are subject to change. Any price and availability information displayed on Amazon Site at the time of purchase will apply to the purchase of this product.