If your underwater photos are coming out blue and with washed-out colors, a good option is to add an underwater filter. There are several approaches; Backscatter’s Flip7 is unique and convenient. 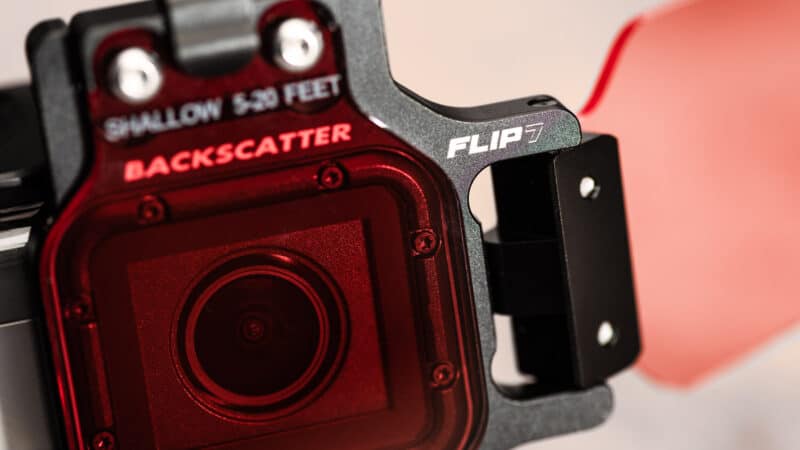 If you’ve ever tried taking photos or video underwater, particularly when you’re snorkeling or Scuba diving, the first challenge you run into is keeping your camera dry. With newer GoPros, that’s much less of an issue because they have the waterproof housing built-in.

The second thing you run into is that the photos and video footage look washed out and all blue or gray. The problem gets worse the deeper you go. Rather than beautiful red and orange and yellow coral and fish, the versions that appear in your photos are shades of blue with other colors muted. That’s not something distinctive to GoPros–it’ll happen with all cameras that are color balanced for typical above-water shooting. 1

So if you want your underwater photos to look more “normal”, you have three options:

Take your own light. Taking your own underwater lighting, whether with strobes (flashes) or constant lights (video lights), can result in wonderfully rich photos. There aren’t any off-the-shelf options for firing strobes with GoPros underwater, so if you’re working with a GoPro, you’ll be looking at constant lights, often sold as video lights.

There are, however, several negatives and limitations to this. It adds several layers of complexity in shooting and gear. It adds expense. And it works far better for very close-range photography such as macro shots rather than wider shots further away, in part because many of the lights lack power and in part because you run into issues with bubbles or particles in the water that create a backscatter effect.

Edit in Post-processing. The color imbalance underwater isn’t strictly a color temperature issue, but adjusting the white balance in an image editing app gives a quick way to get better results. It’s also easy to do. But you’re still somewhat limited in the quality of the results because the process can’t recapture colors and light that the sensor never saw or that was outside of the sensor’s tonal range. It also works much better for RAW (.gpr) files than with JPG files. Another option with the HERO7 Black is to assign a manual white balance in the camera when you shoot, but that’s still not ideal.

Of course, there are other, more powerful ways to tinker with the color balance in image editing apps, such as boosting the red and orange, and they can give better results than using the white balance slider alone, but you still run into the problem of the inconvenience of needing to spend more time editing the photos and that you’re still limited by the colors that the sensor captured.

Shoot with an Underwater Filter. A third way to get better color in your underwater photos is to tackle the problem before the light hits the sensor. For this, you’d use an underwater filter. The most common ones are orange or red, but you can also get other specialist ones for different kinds and colors of water (green water or blue water, for instance).

There are quite a few different underwater filter options available for GoPros. The simplest and cheapest are usually the ones that clip over the front of the lens port. With some of the older GoPros, you could also get thin films of colored gel that fit inside the waterproof housing between the lens and the housing’s lens port. It’s fiddly, but it works. But it also doesn’t make as much sense with newer models if you’re using the camera without a separate housing. Another option is to add a standard 55mm filter thread mount. That opens up a world of standard 55mm photography filters, but it doesn’t have the same convenience factor of the Flip7 system.

The Flip7 system from Backscatter uses a different approach. And it’s one I like. Rather than clip-on or slot in, it uses, well, a flip method. It’s a combination of a frame bracket that clamps around the Super Suit’s lens port and then some swing doors that hold rigid colored gels. They’ve used this Flip system before; this is the latest version. (UPDATE: Since I originally wrote this new GoPros have come out. And Backscatter has released new versions of the Flip filter system for the GoPro HERO8 Black and GoPro HERO9 Black).)

Based in Monterey, California, Backscatter specializes in underwater photography and videography. They’ve designed their own underwater filter system for GoPros that they’ve called the Flip. I’ve been shooting with it on a HERO7 Black, but the compatibility is actually quite broad, and it will work with the housings for models going back to the HERO3. 2

There are some advantages to this approach. For one, it’s very simple and convenient to switch between filters or move them out of the way entirely. With a simple flick, you can put a filter in place or move it out of the way for above-water shooting. So if you’re diving, you can also switch between filters designed for different depths (this again has to do with the wavelengths of light penetrating to those depths and isn’t anything do with water pressure as most depth-ratings are for camera equipment). So if you’re doing a reef dive that might start at 15 feet but then moves down to 40 feet as you move up and down or along a reef wall, you can very easily switch between the filters, even if you’re wearing dive gloves.

For another, you can swap out the filters depending on the water conditions. The folks at Backscatter have gone to a lot of effort to get just the right colors for the gels that give the best results in the widest range of uses. The gels themselves are rigid and very good quality.

Shallow. The Shallow filter is designed for use at depths from 5 to 20 feet. So it’s the ideal one to use for snorkeling.

Dive. The next strongest is designed for use between 20 and 50 feet in bluewater conditions.

Deep. This deep orange/red filter is designed for depths below 50 feet.

GreenWater. Rather than red or orange, this one is strongly magenta and is designed for green water shooting. That’s something you’re more likely to encounter in cold regions.

NightSea. This is a highly specialized option designed to capture underwater fluorescent creatures when used in conjunction with a blue light.

There is an important consideration when using the Backscatter Flip7: it doesn’t attach directly onto the HERO7’s lens port. It attaches to the Super Suit dive housing’s lens port, so you’ll need one of those first. There are third-party aftermarket dive housings available, but not all of those will work for this.

The mounting frame then goes around the housing’s lens port and clamps into place using one of the supplied hex keys.

You can then screw on your choice of filters into place on each of the two swing arms. Each filter attaches with two small screws that use the other of the supplied hex keys. This process is a bit fiddly, and it’s very easy to drop and lose a screw, so it’s something you’ll ideally want to do before heading out on the water rather than trying to do on-site on a rocking and busy dive boat. But once the system is assembled, you don’t need to mess with it again.

Once installed, it sits flush with the lens port. So you don’t need to worry about vignetting. You do inevitably lose some light through the filter, which can become an issue with the GoPro’s relatively poor high-ISO performance.

Here are some quick side-by-side comparisons I took recently. This first one is without and with the Shallow filter. 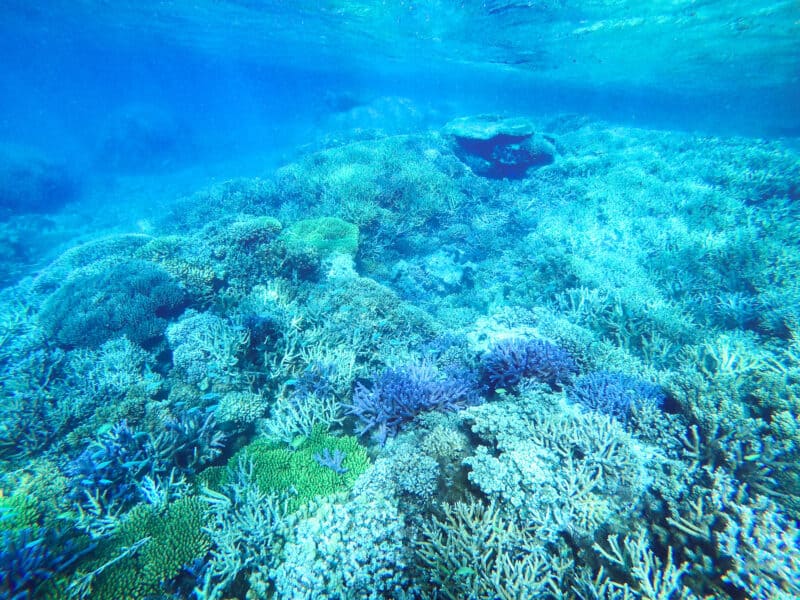 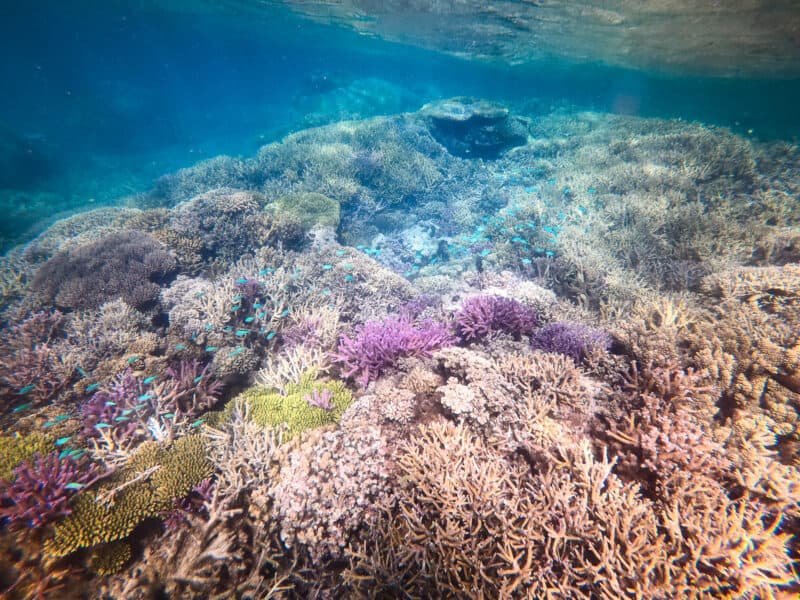 And here’s a combination shot that’s a good illustration of the effect.

There are a number of factors to consider in use.

You’ll need a Super Suit dive housing as a prerequisite. I’ve put together a separate guide on using that.

You wouldn’t normally use one of these filters for things like surfing or kayaking. They’re really designed for shooting through water.

It’s much easier to attach your choice of filters to the swing arms before heading out onto the water.

The swing-arms design is convenient, but in one respect it’s not ideal. And that is that if you have two filters attached, at least one of them is always going to be sticking out somewhat. So if you’re into a pocket or wetsuit to get your hands free for one of the thousand other things you need to do when getting ready to dive, it’s easy to catch the filters. I haven’t had any break–they’re sturdily built–but the potential is there and they do tend to catch on things. One option is, if you know you’re only going to need one filter, just to have that filter attached, and leave the other arm empty.

The Flip7 comes in a small neoprene pouch that’s a useful way to store everything. It includes a couple of small hex keys for locking the bracket in place and attaching the individual filters.

The filters are made of rigid and strong plastic, but they can and do scratch. But small scratches have much less impact on image quality when you’re shooting underwater and the filter is wet than they would in dry shooting. And at $20 each, they’re not exorbitantly priced if you need to replace one.

You can get the Flip7 system in various configurations, including single-filter and double-filter versions, directly from Backscatter.

And don’t forget that you’re going to need a Super Suit housing to mount it on.

My main quibble with the design is related to it being a little cumbersome when not using it. When putting it in a pocket or stuffing down a wetsuit, for instance. And not everyone is going to want to invest in the expense of a Super Suit dive housing as well as the filter system. But aside from that, the Backscatter Flip7 is the best solution I’ve come across so far for adding dive filters to a GoPro and improving the color balance of underwater photos. Once set up, it’s an incredibly quick way to switch between filters for different depths or use no filter at all.

If you’re after a simpler approach of snap-on filters, I’d recommend these from PolarPro. They still require the Super Suit.

Images and product information from Amazon PA-API were last updated on 2022-05-23 at 03:18. Product prices and availability are accurate as of the date/time indicated and are subject to change. Any price and availability information displayed on Amazon Site at the time of purchase will apply to the purchase of this product.