GoPros love the water. But they don't float. The CamKix Premium Bobber is a good option for keeping your GoPro afloat and visible. Since I originally wrote this, CamKix seems to have discontinued this version. They still have the simpler version available. And several other brands have come out with their own versions that seem practically identical–you can see some of them below.

The whole point of GoPros is that they can go anywhere. With a durable waterproof housing coming as standard on most of the GoPro packages, taking them into the water is a natural. I wrote a couple of weeks ago about one good option for floating your GoPro with a floating neoprene strap. Here’s another good option that has its own benefits: the CamKix Premium Bobber. CamKix sent me one to try out.

It makes shooting easier while you’re doing things in and around the water. And better still, if you drop your camera the whole thing will float. Because, after all, you don’t want to learn the hard way that GoPros don’t float. It can also serve as a short selfie stick.

The main feature of the handle is that it floats, but it’s also a surprisingly useful on dry land (or snow land) as well. GoPro’s aren’t shaped to fit in the hand in the way a DSLR is, so handholding them can be a bit precarious and shaky. Quite aside from their floatiness, the bobbers are good for everyday use too.

GoPro has their own bobber, although they’re recently released a new and improved version called The Handler. It has a built-in mount point that uses the clip connection, and it retails for $29.99.

CamKix has a couple of different models of bobber. The one I’m focusing on here, the premium version, and it’s usually available for considerably less than the GoPro-branded alternative.

Both models do basically the same thing. Both are hollow floating hand grips designed specifically for use with a GoPro (you won’t be able to use with a non-GoPro camera without some kind of attachment). Both are brightly colored, and both include a lanyard for extra security to put around your wrist. Both have a large rubberized grip that covers most of the shaft. Both come with the GoPro attachment bolt, so you don’t need to get any extra attachments to stick a GoPro on it, because they all use the same distinctive attachment method. Both bobbers come with a good quality adjustable lanyard.

The <CamKix Premium Bobber has a few little nice touches of its own.

For starters, the end screws off. If you have a few small items with you that can’t or shouldn’t get wet or lost, like a few cash notes or some keys, you can store them in the float. It has a double o-ring seal to keep the contents dry. Another use is to fill the tube with water to make it neutrally buoyant. That’s going to be most useful for scuba diving, where neutral buoyancy is crucial to a successful dive.

It feels good in the hand. The tube is thick enough to get a good grip even with dive gloves on or with cold hands when you’re kayaking.

My only real criticism has to do with the high visibility aspect. CamKix’s bobber comes in a choice of bright yellow and bright orange. Both colors are good for high visibility, but I wish there was more of the color exposed. The black handgrip covers much of it. The reason this product exists is primarily to offer peace of mind that your GoPro will float if you lose hold of it. And when it floats, it floats camera down. The part of the bobber that bobs out of the water in that case does have a little yellow or orange, but it’s not a lot. If you’re boating or kayaking or surfing, where the water is stirred up around you, it’s not always easy to see small things in the water. So I’d like to see a larger surface area of high visibility color that floats above the water.

Overall, I like it. I think it’s better value than the original GoPro Bobber. And I’ve found myself leaving it attached even on dry land as a handy way to hold the camera while shooting (the GoPole Grenade Grip) is another good option for that, but it doesn’t float). And because it’s thick enough to work with gloves, it’s also be a good option for snowboarding or other winter sports where the combination of high visibility colors if you drop it in the snow and the convenience for handheld shooting might be useful. CamKix seems to have discontinued this premium bobber, but here are some similar alternative. 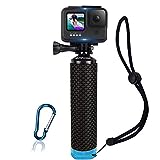 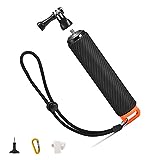 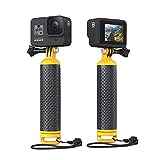