A comprehensive guide on how to charge the GoPro HERO5 Black & HERO5 Session cameras, including options for USB charging and using an AC or wall charger. 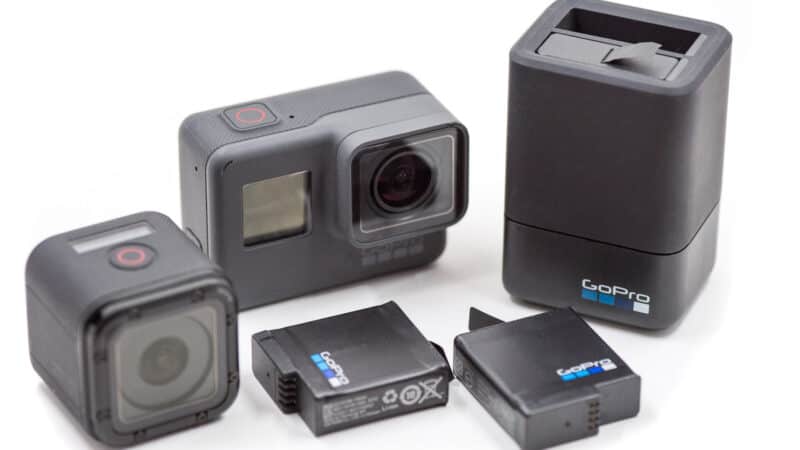 The GoPro HERO5 Black and HERO5 Session both come with a battery and a USB-C charging cable included. But they don’t come with an AC wall charger. So you might be wondering how you charge the battery.

I’ve previously posted a more general overview of how to charge GoPro cameras. Here I’m focusing specifically on the two GoPro HERO5 models: the HERO5 Black and the HERO5 Session. (It also applies to the HERO (2018), because that’s the same camera as the HERO5 Black with different firmware.) There’s some overlap with methods for charging them, but they’re not exactly the same. And there are more options than it might appear at first.

How to Charge GoPro HERO5 Cameras: The Short Version

So here’s a short version for how to charge GoPro HERO5 cameras. Not every method works with both cameras because the HERO5 Black has a removable battery, while the one in the HERO5 Session is built-in and non-removable.

How to Charge a GoPro HERO5 Black and HERO5 Session: In Depth

There’s some overlap between how these two cameras can be charged, but there’s also an important difference that’s very relevant to the options you have for charging them. And that is that with the HERO5 Black you can take the battery out and swap with a new one. With the HERO5 Session, the battery is hardwired into the camera, so you can’t remove or replace it. For the sake of clarity, I’ll cover each camera separately below.

But first, the key power spec when it comes to charging is this: both of the HERO5 models take up to 5V/2A power input. You can less than that, but it will take longer.

This section applies to both the HERO5 Black and the HERO5 Session.

When it comes to a power source, there’s a range of different options.

Computer. You can connect the USB cable to a computer. It will charge doing that, but the USB power output on most computers is quite low, so the charging will take longer. Unless the computer has a dedicated USB charging port (most don’t, but the label you’re looking for is “charging downstream”), many USB ports on a computer are known as standard downstream and max out at passing 0.9A even over USB 3.0 (lower for earlier versions of USB).

While using the computer as a power source works and this can be a useful method while traveling, it’s not the quickest and most efficient way to do it and is a method I rarely use.

Standard USB AC Wall Charger. You can use pretty much any USB wall adapter you already have on hand, such as the one for your phone or any number of other devices. The output on AC adapters varies widely. Some older ones will only output 0.5A; others might be capable of outputting all the way up to 3A or above. (And by USB AC Adapter, I’m also referring to multi-port USB chargers that work in the same way.) GoPros are designed to work with these and will only accept the amount of charge you can work with. So while there are always exceptions, in most cases you can use any standard AC charger with USB output, including ones for your phone or tablet. GoPro recommends that you only use a GoPro-branded charger, of course, but in practice there’s a huge range of ones that will work just as well.

USB-C QuickCharger. The HERO5 Black used a USB-C connector, and that means you can also take advantage of even higher output than regular USB (the spec allows for up to 20V/5A, although the HERO5 cameras can’t use that much).1 The catch is that the quick charging specifications aren’t well standardized, so just because both ends of the connection are nominally capable of quick charging, it doesn’t guarantee that they share the same specs and that it will work in practice.

Using the Supercharger, the HERO5 Black can charge up to 20 percent faster than normal.2 While it’s by no means the cheapest charger on the market, you can be confident that it works nicely with the HERO5 Black (with aftermarket versions it can be more of a case of rolling the dice). And one nice feature is that it comes with some international AC plug adapters, which is very handy if you’re traveling. Another advantage is that it pairs nicely with GoPro’s own Dual Battery Charger (more on that below). It has two output ports, so you can charge two cameras or other devices at once (if you plug it into a standard USB device, it will automatically adjust the power output for that port down).

Power bank / External USB Battery. You can also plug in an external USB power bank or portable USB battery. Most powerbanks currently on the market are the older style of USB. Those work well, they’re readily available, they come in a wide variety of sizes and capacities, and they’re good value. You might already have one on hand–if so, you can use that. The downside of the traditional USB power bank is that it doesn’t take advantage of the faster charging capabilities of the USB-C standard.

But there are now more and more USB-C powerbanks becoming available. They’re often marketed as laptop chargers, but they work well with other devices as well. Overall, they tend to be more expensive than the traditional USB powerbanks, but the extra convenience of the higher USB-C output (and therefore faster charging) is a useful convenience. One I use and like is this one by RAVPower.

Other USB Options. There are, of course, other power sources that can output power over USB.

This section applies only to the HERO5 Black. Since there’s no way to remove the battery from the HERO5 Session, obviously you don’t have the option with that camera of charging the battery out of the camera.

Battery Charger Cradle. Charging the battery in the camera is convenient and easy, and it requires the least number of external accessories. But in many cases, it’s also going to mean that you can’t keep filming until it finishes charging.

The way around this with the HERO5 Black is to have extra batteries and charge those outside the camera. For that, you’ll need a charger cradle to hold the battery (or batteries).

The GoPro HERO5 Black doesn’t come with a separate battery charger cradle as standard, but you can pick them up as an optional extra. Most of the ones available today can charge up to two or three batteries at once.

The most obvious starting point is GoPro’s own Dual Charger. It comes with a spare battery and is compatible with GoPro’s fast-charger.

There are also less-expensive options from third parties. They’re not direct copies and most of them use slower micro-USB charging cables, but they’re effective ways to charge multiple batteries at once. Wasabi, Watson, and Smatree are a few brands that I’ve used several products from, including batteries and chargers for the HERO7 Black, HERO6 Black, and HERO5 Black, and found them to be reliable and cost-effective alternatives to the GoPro-branded versions (albeit slower). There are also plenty of other aftermarket brands that make them, but as always with aftermarket accessories, quality is likely to vary.

You can find them at places like Amazon and B&H Photo.

Ideally, you’d be using the USB charging cable that comes with the camera. But if you lose that or need a spare, you can find USB-C cables pretty easily at places like Amazon.

The catch is that not all USB cables are created equal, and that’s especially true when it comes to newer specs like Lightning and USB-C. I routinely use a variety of different aftermarket cables, and many have worked well, but I’ve also come across ones that don’t. So if you decide to go with an aftermarket cable it’s a good idea to test before heading away on a trip to make sure it works as expected.

How Long Does it Take for the GoPro HERO5 to Charge?

How long it takes to fully charge your GoPro’s battery depends on whether it’s fully depleted, the battery’s overall health (ie. how old it is), and what method you use for charging. The charging tends to be fastest at the beginning and slow down for the last 20 percent or so as it approaches full charge.

If you’re using a power source with a low current such as a computer’s USB port, it can take up to 4 hours to fully charge the battery.

If you’re using a standard AC wall charger, it shouldn’t take longer than 2 hours to charge a fully depleted battery. It should be at about 80 percent charge after 1 hour.

The new USB-C Supercharger for the HERO5 models is faster still–potentially up to 20 percent faster than when using a 5V/1A charger. And if you pair the Supercharger with the Dual Battery Charger over USB-C, you can get up to 45 percent faster.

Turn Off Wireless. The wireless functionality drains battery power, so for the quickest and most efficient charging, it’s worth turning the wireless connection off if you’re charging the battery in the camera.

Charging While Using. In general, you can use the camera while it’s connected to an external power source, but the battery won’t charge while you’re actually recording. Charging will resume when you stop recording.

The exception is if you’re charging the camera through a computer’s USB port. In that instance, you can’t record with the camera connected.

Images and product information from Amazon PA-API were last updated on 2023-02-02 at 12:18. Product prices and availability are accurate as of the date/time indicated and are subject to change. Any price and availability information displayed on Amazon Site at the time of purchase will apply to the purchase of this product.