The ReFuel ActionPack is a waterproof extended battery for the GoPro HERO7 Black, HERO6 Black, HERO5 Black, and HERO (2018). There’s a lot to like about GoPros. But one of the things I don’t like is that they have pretty poor battery life. So one of the daily realities of working with GoPros is that you’re likely to spend quite a bit of time and effort managing your batteries so that you can keep shooting.

And there are many situations where, as much as you might turn off all of the battery-draining features you don’t necessarily need (like wifi, GPS, and video stabilization), the battery life of the standard GoPro battery just isn’t long enough. One good option in those cases is to add an external battery.

Other third-party brands have stepped up, however. I’ve reviewed several of their external batteries before (you can find the overview here). Some are better than others for certain situations. And there’s no perfect one-size-fits-all solution. Many of the external batteries that work with the HERO5, HERO6, and HERO7 Black, for example, don’t work with the HERO8 Black or HERO9 Black because of the new body shapes and positions of the ports and USB-C inputs.

I’m focusing here on the Refuel ActionPack from DigiPower. It’s an external battery pack for the HERO5 Black, HERO6 Black, and HERO7 Black that claims to enable up to 9 hours of recording time on a single charge (there’s fine print on that—see below). Its approach is to integrate an external battery with a kind of frame housing. And one of the things that makes it particularly interesting is that it is waterproof and dustproof—few of its competitors can claim that. 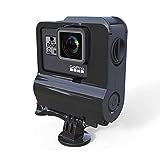 Once you’ve installed it, you’ll notice it. With such a tiny and light camera, you really notice any extra bulk and weight, and when installed on the camera, the whole thing becomes about the size of a standard compact camera. So it’s a trade-off: extra shooting time for extra bulk. There are going to be some shooting situations where that’s not going to be a good deal.

But the packaging isn’t up to date with the latest models; what it doesn’t say is that it’s also compatible with the HERO7 Black and the HERO (2018), both of which use the same external design and USB-C port position.

But there’s an important point to note here—the ReFuel ActionPack is a supplement to the battery that goes in the camera, not a replacement. So you still need the usual battery installed in the camera. What actually happens is that the extended pack keeps the internal battery topped up. So the runtimes that are quoted in the marketing refer to a total recording time using both batteries, not an additional amount of time.

DigiPower claims that you can get up to 9 hours of recording off a single charge, but that’s not going to true for all shooting situations. Firstly, that’s in the video mode that uses the least power: 720p or 1080p30. At 4K, they claim you can expect around 6 hours. These assume that you also have a fully charged battery inside the camera. And it’s with power-sucking features like wifi, GPS, and video stabilization turned off. If you’re using video stabilization, for instance, you can expect significantly less than that because of the amount of internal processing power that it takes. Ditto on maintaining an active wireless connection with the GoPro mobile app—that takes a lot of extra power.

The reality is that in typical shooting, you’re not likely to get that long. I don’t usually film for 9 hours uninterrupted, so in everyday shooting, I haven’t timed it. And starting and stopping the camera and previewing and changing menu options all cut into battery life. But to test it out, I set up a HERO7 Black. The runtimes DigiPower claims were not using a HERO7 Black, but since that’s the current model, I thought it worth testing with that. I used the settings that the box says were used for their runtime figures—1080p/60fps with wifi off. I also made sure that wifi, GPS, and other battery-draining features were disabled and that both the internal battery (a GoPro-branded original) and the Refuel ActionPack were fully charged. The temperature was a pretty constant 70°F (21°C) (temperature matters when it comes to lithium battery life). With that setup, the packaging claims I should get around 8 hours. I let it record undisturbed in front of a clock. It ran for 7 hours and 15 minutes before dying. Which is frankly closer to the claimed numbers than I expected.

The upshot is that I wouldn’t necessarily count on getting the full runtimes quoted on the box—they’re intended as best-case, and they’re also probably a bit generous for real-world shooting. But you can certainly expect a lot more than the camera’s internal battery alone.

One of the standout features of the ReFuel ActionPack is that it’s waterproof.

There are other solutions to adding an external battery to GoPros that are also waterproof, like the Oumers Side Power, but they tackle the problem by adding the battery and them wrapping the camera and the battery in an external waterproof housing. There are four downsides to that approach. Firstly, and most importantly, trapping the camera inside a closed housing also traps heat inside. And the latest models of GoPros can get very hot when filming. Their lens port acts as a heat sink to dissipate some of that heat. But in a closed space, the heat gets trapped, potentially causing the camera to overheat and also to risk fogging. Secondly, with multiple moving parts to contend with, it’s just more cumbersome to use in the field. Thirdly, it makes it impossible to use the touch aspect of the touchscreen on the back of the camera. And fourthly, it’s adding yet another layer of glass or acrylic in front of the lens, potentially impacting image quality.

The ReFuel ActionPack does things a bit differently. Rather than trying to add an extra layer of waterproofing to the whole thing, it focuses only on the connection point. So it seals only around a few doors and connection points. That leaves the lens port exposed as normal, as well as the camera’s own buttons (rather than having another button pressing down on the camera button, as it is with an external waterproof housing).

The ReFuel ActionPack is rated to be waterproof down to 33 feet / 10 meters, which is the same as the camera itself. Of course, waterproofness always relies on all the doors and seals actually sealing properly, so it’s good practice to regularly check that no grit or dust are fouling things up and preventing a seal.

DigiPower also claims that it’s hardened against extreme cold and heat, working in temperatures from 0° to 110°F (-18° to 43°C). That might be true of the frame and connections, but it ignores the reality that lithium batteries don’t perform well in cold or heat, so you can expect shorter battery life if using it in very cold or very hot conditions.

The battery has to connect to the USB-C port of the camera, which also means that you have to remove the door covering that port. The door is designed to snap off and on easily.

You then simply slide the camera onto the USB-C plug and lever the frame over the camera. There’s a ratchet lock to secure it. That also pushes the camera snugly into the seal on the side.

The design gives you full access to the back screen without adding an extra layer over it, so you can still use it for the live view as well as the usual access to the menu touchscreen system.

There’s a rotating lock on the side of the frame that doubles as a sealed door cover over the micro-USB port. I’ve found that it’s very tight to unlock and lock, but that’s probably a good thing when you need it to seal. Once it’s open, you simply connect that to a standard USB power source to charge; it doesn’t come with an AC charger, but you can use one you already have on hand or another USB power source like a power brick. It’s not compatible with the newest USB-C fast charging. Or rather, it will charge, but not at fast-charging speeds; it can handle up to 2 amps (10 watts). With a 2-watt / 10-watt power supply, you can expect the ActionPack to fully charge in around 3 1/4 hours. If the camera is installed, it will also charge the camera’s own battery as well (and add some extra time on top of that), which saves you from having to undo the whole thing to remove the internal battery.

There’s a row of four LEDs that serve as charge indicators.

Included in the box are two mounting bars that slide onto the bottom. One is for a traditional camera tripod mount; the other has the standard GoPro attachment point. So you can mount it using the usual mounting systems, although you’ll have to factor in the extra weight and size in some situations. At least one user I’ve seen has complained that the fit isn’t tight and allows wobble. I haven’t run into that issue. For me, it’s tight and secure with no give. If anything, it’s a tad too tight because it’s hard to remove the sliding plate (admittedly, not something I need to do often). You can also connect external power to this and use it in what’s called pass-thru mode. As the name suggests, it passes the power directly to the camera. It’s a way to keep recording indefinitely—well, at least until the memory card fills up. That’s useful for things like long-term time-lapse shooting.

There is one important caveat, though: when using the pass-thru power port, the setup is no longer waterproof. The port has to be exposed, after all, to be able to connect to it from the outside.

Overall, I’ve found them to work well, and they have become my go-to option if there’s any risk of water coming into play. Even if I haven’t gotten quite the claimed times when using a HERO7 Black in them, I have gotten significantly longer usage times than just using the internal battery. If your usage is very sensitive to time (i.e., you need to milk the maximum time), then you’ll want to test before a crucial shoot. I haven’t used the setup fully submerged, but I have used it in heavy rain without any issues.

There are two things I like about this approach over some of the other options. One is the overall design. It’s still relatively compact and mountable, and you still have full access to the touchscreen and usual controls. I also like that it doesn’t add an extra layer over the lens, which maximizes image quality. The second is that it’s waterproof without using an external case.

I have two of them—I bought them at B&H Photo and Amazon.