GoPro’s main marketing push for their latest flagship model, the HERO7 Black, has revolved around its most recent generation of in-camera video stabilization. Some previous models have had it, of course, but with the new version, which they’re calling HyperSmooth, they’ve lifted the bar considerably.

DJI has now released their own camera that takes direct aim at the HERO7 Black. DJI is best known for their drones, but those drones have also featured some impressive cameras as part of the packages. But they’ve now increasingly branched out to standalone cameras. Not long ago, they released the DJI Osmo Pocket, a tiny camera with an integrated gimbal that’s pitched at vloggers. The new model, the Osmo Action, looks and performs quite a lot like a HERO7 Black.

I’ve put together a much more comprehensive side-by-side comparison of how the Osmo Action compares with the HERO7 Black, but here I wanted to focus specifically on the in-camera video stabilization. DJI has called their version RockSteady.1

Here are some side-by-side comparisons of RockSteady vs HyperSmooth. I’ll aim to add some more examples here as I get the opportunity to shoot them in different types of situations.

For these, I’ve mounted a DJI Osmo Action directly alongside a GoPro HERO7 Black using a dual mount. So both cameras are attached to the same base and are experiencing the same movement. You’ll notice that the images do look slightly different. Some of that’s just the different look of the video that comes out of each, and some of that is due to the different fields of view each has; the GoPro has a slightly wider perspective than the Osmo Action.

Mounted on a Bike

But first, here’s a reference point for what the stabilization is doing. This shows what effect the RockSteady stabilization is having compared to non-stabilized footage. The cameras were mounted on the handlebars, and even though it’s a smooth, well-paved road, you can see a lot of fast camera shake and vibration that the RockSteady is working to overcome.

Here’s another one, this time on a bumper path and including a lot more visual detail for the video codec to contend with.

Mounted on a Car

For these, the cameras were mounted on the hood of a car.

Again, here’s a reference clip that shows stabilization on vs off. The car’s mass and suspension naturally absorb a lot of the vibration, but you can still see that the stabilization matters.

And here’s the version with stabilization turned on on both cameras:

Here’s another one mounted on a car, but this one’s with a hillier and windy road that adds a lot more side-to-side twisting.

These were taken with the cameras still mounted together but hand-held while walking. Compared to the vehicular motion above, there’s a lot more swaying and side-by-side motion, and that’s where I’ve found the current iteration of RockSteady struggles most.

Again, first a point of reference with stabilization on vs off:

And here’s the version with RockSteady vs HyperSmooth.

Here’s another walking in which HyperSmooth easily outperforms RockSteady:

Here’s an example that shows something a bit different. It’s actually mounted on the front of a stroller (pram). Now, I realize that’s not a place many people are going to want to be putting a GoPro, so it’s not a typical use scenario. But I think it’s a useful example to include here for a couple of reasons.

Firstly, it’s low to the ground, not that different from mounting on something like a skateboard or remote-control car. That means there’s a lot more fast-moving foreground detail in the frame. Secondly, and more importantly, it’s a good example of one of the weird quirks you can get with electronic stabilization compared with a proper gimbal. You’ll notice that the stabilization doesn’t apply equally throughout the frame, so the bottom is getting a weird kind of jelly-like stabilization while the top is staying smoother. You’ll also notice some differences in how the two systems handle the side-by-side movement. The HyperSmooth version is smoother sideways, while the RockSteady one seems to lock on and then have to suddenly readjust every now and then.

First, though, here’s the reference version with the stabilization on vs off. As you can see, there’s a lot of vibration to deal with.

And here’s the RockSteady vs HyperSmooth version.

For me, it’s a clear result. In my experience, HyperSmooth is much more effective than RockSteady.

That’s not to say that RockSteady is bad. It’s quite effective, as you can see from the examples above. The results are generally much better than you get without stabilization. I’ve seen the occasional minor glitch and odd jerk, which is typical with electronic stabilization, but they’ve been relatively few and far between.

I know I’ve already said this, but it bears repeating: for all the marketing copy touting electronic stabilization “gimbal-like,” algorithms still don’t rise to the level of a good-quality gimbal properly operated. It’s not just about the smoothness of the ride. The algorithms can also impact the sharpness and overall image quality of the video.

That said, using an external gimbal is often inconvenient, it adds extra expense and moving parts, some have a learning curve to operate properly, and most aren’t waterproof. So in-camera electronic stabilizations like RockSteady and HyperSmooth definitely have a place and are slam dunks in terms of convenience.2 And if you’re going to be using it, I’ve found that both DJI’s RockSteady and GoPro’s HyperSmooth offer good results right out of the camera, with HyperSmooth having a clear edge.

It’s possible that both companies could tweak their stabilization algorithms and roll out improvements in future firmware updates. The firmware versions I’m using for these examples are v.01.70 on the GoPro HERO7 Black and v.01.02.00.10(6436) on the DJI Osmo Action. 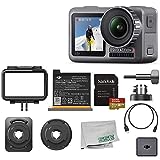 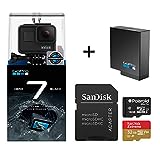 Images and product information from Amazon PA-API were last updated on 2021-04-12 at 21:02. Product prices and availability are accurate as of the date/time indicated and are subject to change. Any price and availability information displayed on Amazon Site at the time of purchase will apply to the purchase of this product.