If you’re looking to get split photos of above and below the water line, a dome port is what you want. Here’s a rundown of how they work with GoPros. 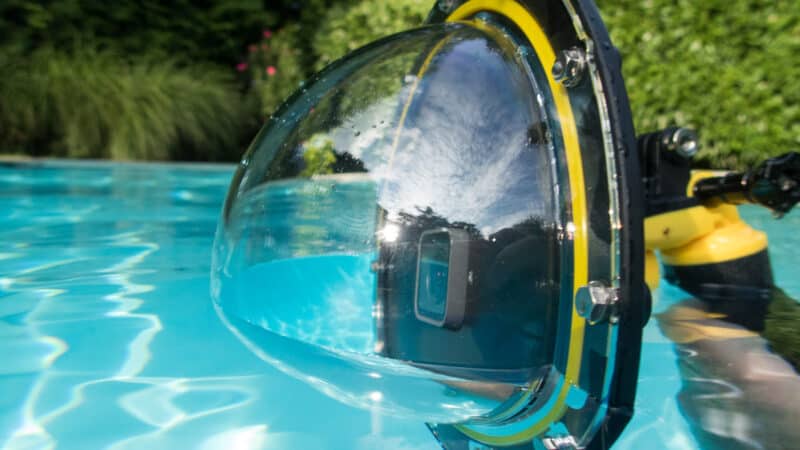 If you’re looking to get split photos of above and below the water line, a dome port is what you want. Technically, it’s possible to do it without a dome port, but in practice, it’s very, very difficult because of how hard it is to perfectly align the water line with the center of the lens. A dome port effectively pushes the waterline out away from the lens, vastly increasing the working size. And that makes it much, much easier to work with.

The dome ports for GoPros are typically 6-inch domes. They’re generally not designed for diving and aren’t hardened against water pressure the way that higher-end dome ports and underwater camera housings are.

They’re also not the most convenient accessories to lug around–there’s no way around the fact that they’re cumbersome, the acrylic is easily scratched, and they’re easy to damage in transit.

Those things aside, though, dome ports can be very useful for getting some distinctive and unique water shots from your GoPro.

Above and below of a small iceberg in the Arctic off the coast of Svalbard. Shot with a GoPro HERO5 Black in a dome port.

Here’s a quick rundown of how they assemble and work in the water.

In this example, I’m using the Telesin 6-inch (Model GP-DMP-T05) paired with a GoPro HERO5 Black. After having tried a few different dome ports for the HERO5 Black and HERO4 Silver and Black, this is my favorite. It’s compatible with the HERO7 Black, HERO6 Black, HERO5 Black, and HERO (2018).

It includes the dome, a handle grip, and a mechanical pistol trigger. It’s marketed under different brand names at some retailers. Make sure to get a dome port for your specific model of camera–a dome for the HERO4 models won’t work on the HERO5 and vice versa. But the model for the HERO5 Black will also work with the HERO7 Black, HERO6 Black, and HERO (2018).

Getting a Good Shot

Dome ports are easiest to work with in still conditions where the water line isn’t moving. Waves and ripples can make it harder to get a good shot.

That holds true when you’re moving, too, but sometimes you can mitigate it to some extent. When I use a dome port when kayaking, for example, I’ll reach forward and gently move the port back as I’m shooting, in an effort to keep the camera in the same place relative to the water. It’s not always easy or effective, but you’ll often end up with a better shot than if the camera is moving through the water. Of course, that’s not always true. Sometimes you can end up with something unusual in less-than-ideal conditions.

If you’re used to using high-end dome ports for DSLRs or mirrorless rigs, there are some key differences here you should watch out for. They’re conceptually the same thing, but the key difference is in the quality control. These sub-$50 ports simply don’t have the same quality control or refinement as the lens ports many times that price. And some of the quirks are related to the unusually deep depth of field of the fixed-focus lenses GoPros have.

Scratches. One is scratching the plastic. That’s always an issue with dome ports, but the materials used here aren’t strengthened to be more scratch resistant in the same way that some more expensive ports are. And because of the camera’s unusually deep depth of field, those scratches will show up sharp and in focus in your images.

Leaking. The second is leaking. Having been through several dome ports now, I’ve found that some are better than others when it comes to withstanding leaks, even when using them at the water’s surface.

Now you might think that doesn’t matter because the HERO5 Black (or HERO6 Black or HERO7 Black) is itself waterproof. And that’s true. But a leaking port creates a few thorny problems. Even a slight leak is likely to result in water droplets sticking to the inside of the lens port. And they’ll be marvelously in focus and prominent in your shots. I’ve included an example below. Drying it out takes some time because the only airflow can come through the relatively small opening where the camera goes. And even when it’s dry, there’s likely to be some residue marking the inside the port, something I found especially true with salt water and salt marks. So it’s well worth testing for leaks before you take it out for a real shoot.

Reflections. Something else to watch is that in some circumstances the reflection of the camera itself shows up in the frame. This happens when there’s bright light from the top (as is normal during daytime) and a particularly dark section below. It’s not something I’ve found to be an issue in conditions like the beach, pool, or shallow reefs. But I did run into it while kayaking in the Arctic where the water is exceptionally clear but can also be very dark under the shadows of ice floes. Again, I’ve included some examples here.