Here’s a roundup of some options for spare batteries and battery chargers for the GoPro HERO 4 Silver and Black editions. 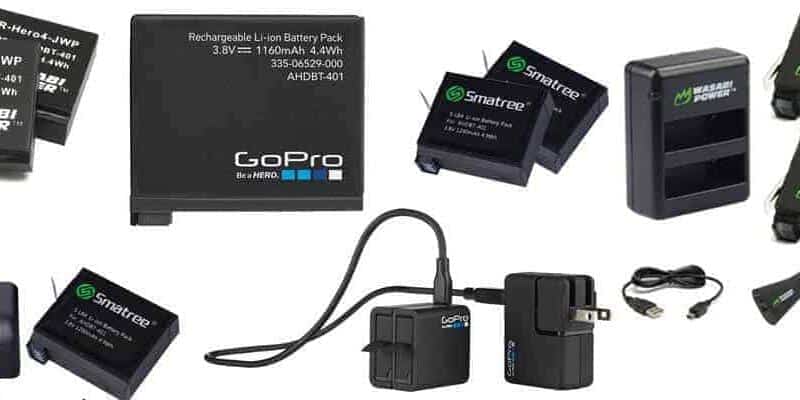 Spare batteries are among the first accessories I buy for all my GoPros. And now that the HERO 4 models are getting old, there’s a good chance that your old batteries are fading and need replacement. So here’s a rundown of the options for the GoPro HERO 4 Silver and HERO 4 Black.

GoPro action cameras do a lot of things well. Battery life is not one of them. Even under ideal circumstances, using video modes that use the least power, the best you can hope for is under two hours for a fully charged battery in the GoPro HERO 4. In real-world use, you’re more likely to get something closer to around one hour. If you leave the wifi on, you’ll get less. If you use the LCD screen, you’ll get a lot less.

Even adding an extended battery might bring you up to around three hours, but it also means adding weight and bulk.

And with only one battery, you’ll find yourself waiting for it to charge when you could be out shooting. With a charger that can charge multiple batteries at once, you’ll be able to just rotate them out of the charger as needed.

If you have spare batteries from earlier models, you’re out of luck if you’re expecting them to work in the GoPro HERO 4. The new models use a new kind of battery. It’s a rechargeable lithium-ion battery rated at 1160mAH, 3.8V, 4.4Wh. Both the GoPro HERO 4 Black and the GoPro HERO 4 Silver use the same battery.

Here’s a roundup of some options for spare batteries and battery chargers for the GoPro HERO4 Silver and Black editions. GoPro makes their own. But there are also third-party options made by other manufacturers that are much less expensive, and some have extra features included. I’ve used both Smatree and Wasabi Power batteries and chargers for my GoPros for a long time and have found them to be very good. In my experience, their battery cells perform just as well as the official GoPro-branded ones in day-to-day use.

GoPro offers some GoPro-branded batteries and chargers. They’re officially supported by GoPro, and if you’re at all concerned about compatibility issues, these are the safest bet.

Another option that GoPro offers in their official line is a dual battery charger that also comes with a spare battery. It can charge two batteries at once, and having the external charger gives you much more flexibility rather than always having to charge the battery in the camera.

The official GoPro HERO 4 charger can charge two batteries at once. Please note that despite the official marketing photos you might see, the charger kit comes with only one spare battery and a USB cable. It does not include a USB wall charger or a DC car charger–both are sold separately–but you can use pretty much any of the dozens of other USB wall chargers you already have lying around from other devices.

Smatree is one of the leading third-party brands offering high-quality GoPro batteries and chargers. They have several configurations available.

There’s one that consists of just two batteries that offers excellent value if you don’t need the cradle dock. The batteries use Japanese cells, have the same power ratings as the official GoPro ones and, in my experience in using them for some time now, have been functionally indistinguishable from the ones with official GoPro branding.

Smatree also offers a 3-slot charger kit for charging by USB. It includes two batteries, a 3-slot cradle so you can charge three batteries at once, and a USB cable. It does not include a wall outlet, but if you already have a standard 2.1 USB wall outlet or DC charger, you can use that. Or you can use a regular USB slot on your computer (although that often results in slower charging). 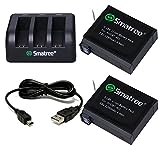 Smatree also offers a whole shebang kit. For just a little more than the bundle above, this one also includes two batteries, a 3-slot cradle, a USB cable, an AC wall charger adapter, and a DC (car) charger adapter. 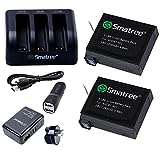 Wasabi Power is another of the aftermarket battery brands that I’ve had good experiences with, and I’ve been using their batteries for GoPros for several years.

They offer a range of configurations. The best value is in their kits, which are very similar to those by Smatree. I’ve used both Wasabi Power and Smatree GoPro batteries for a while now and found them to perform just as well as the official GoPro-branded ones.

They offer a range of different configurations of batteries and chargers–such as two batteries and a charger, or another with a car charger or three batteries.

You can find the Wasabi Power batteries for the GoPro HERO4 at B&H Photo and Amazon. 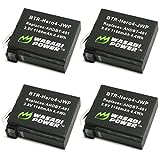 They also offer a bundle that includes some international power plugs. It might be of particular interest if you’re planning overseas travel and want to maximize your options on where and when you can charge your batteries. In addition to a 2-slot cradle, two batteries, a USB cable, and a DC (car) charger adapter, the AC wall adapter includes a switching power supply with four worldwide AC adapter plugs. Those four won’t cover every country in the world, but it will get you going in many of the common places.

Watson is one of the Gradus brands that is owned by B&H Photo. I’ve used several of their batteries and chargers over the years and found them to work well. This one is available as just a charger or in a bundle with two spare batteries.

You can find it at B&H Photo.

Extended Batteries for the GoPro HERO4 Silver and Black

Both the HERO 4 Silver and Black can use a specially designed extended battery. They plug into the back of the camera and roughly double the battery life you’ll get out of the camera, give or take. They also add some weight and protrude out the back, so if you’re using a housing you’ll want to use an extended back door (which is sometimes included, but can also be purchased separately).

These extended batteries will work with both the HERO 4 Black and Silver, but there’s a caveat on the Silver. Because they clip onto the back of the camera, the batteries will completely cover the Silver’s back screen.

GoPro makes an official, GoPro-branded battery that give extended battery life and works on the HERO4 Silver and Black that’s called the GoPro Battery BacPac. As usual, GoPro’s MSRP is a little higher than some of the aftermarket versions, but if you’re at all worried about compatibility issues, this is the safest bet. 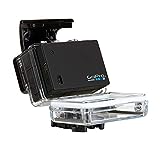 In addition to their replacements for the standard battery for the GoPro HERO 4 Silver and Black, Wasabi Power also make their own version of an extended battery that clips on the back of the camera just like GoPro’s Battery BacPac.

You can buy a version that’s just the battery itself or another that’s bundled with extended backdoors. You can find them at Amazon and

Available at Amazon and B&H Photo. 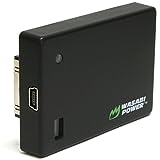 Since I originally posted this, these Brunton batteries have become extremely hard to find. That obviously makes them a much less viable option. But I’ll keep this here just in case someone manages to find one.

The Brunton All Day 2.0 is designed to work with most of the current range of GoPro HERO4 and HERO cameras. It replaces the back door of the standard housing is rated to be waterproof down to 131 feet (40 meters).

You can read my detailed hands-on review of the Brunton All Day 2.0 here.

This is a product that was released after I originally wrote this post, and I haven’t personally tried it. But now that the Brunton All Day 2.0 is basically impossible to find, this option is interesting and unique enough that I think it’s worth including here.

It’s the DigiPower Re-Fuel 6-Hour Action Pack Battery. Like the other extended batteries, it clips onto the back, but like the Brunton, it replaces the whole back–you don’t need a separate extended back door as you do with GoPro’s own BacPac battery. It’s rated to be waterproof down to 131 feet (40 meters), and the manufacturer claims it will provide up to 6 hours of continuous recording.

And if 6 hours isn’t enough, they also make larger versions that apparently provide up to 12 and 24 hours of continuous recording.

The version for the HERO4 is very hard to find now, but you can find versions for the HERO5, HERO6, and HERO7.

Images and product information from Amazon PA-API were last updated on 2023-02-01 at 12:48. Product prices and availability are accurate as of the date/time indicated and are subject to change. Any price and availability information displayed on Amazon Site at the time of purchase will apply to the purchase of this product.