Formatting the GoPro’s SD card frees up space. But it also gets the card ready for use and keeps the filesystem healthy and minimizes the risk of errors. Here are the various ways to do it on different GoPro models. 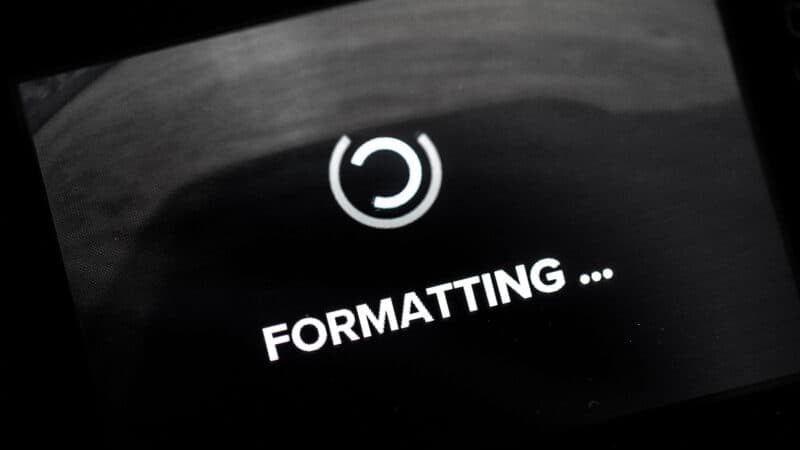 Formatting the SD card will wipe all the data on it. So make sure you’ve backed up everything from the SD card first.

SD cards are an essential accessory for your GoPro. You’re not going to get far without one. unlike some cameras, GoPros don’t have an internal memory that can be used to store images or video footage. 1 I’ve put together some recommendations for the best SD cards for GoPro cameras separately. Here I’m focusing on how to free up space and prep the card for use in a GoPro camera to keep its filesystem healthy and ready for use.

When you format your GoPro SD card, it does two things. It wipes all the data off the card to free up space for new photos and videos. It also prepares the card to be the way the camera wants it, including the appropriate filesystem and folder structure. A kind of conditioning, if you like. It helps prevent SD card errors that might lead to issues with the recording stopping or lost data.

Formatting is something you should do before you start using a new card—and you’ll get prompted by the camera to do it if the card isn’t ready. And then you should also keep doing it routinely after that each time you’ve downloaded all the images and footage of the card.

As a rule, it’s best to format the card in the camera. That’s true not just for GoPros but for any camera. It is possible to format SD cards using a computer, and I have more details on that below, but it’s good practice to always do it in the camera to minimize the risks of data corruption or some kind of formatting issue that could interfere with shooting.

There are a few different ways to format an SD card in GoPro cameras. The process does vary a little between models, but the general approach is broadly similar across different GoPro models. And on some GoPros you can choose among more than one way of doing it. Some GoPros, for instance, give you the option of using the menu on the touchscreen, the buttons and the front status screen, or the GoPro mobile app. On other GoPros, only one or two of those options are available.

All of the GoPros that come with a built-in touchscreen have the formatting option as part of the menu system. The terminology isn’t always exactly the same, but in general, you want to go into settings and preferences and scroll down to the option that refers to resetting the memory card.

Here are some examples:

On GoPros with only a small screen on the front, such as the HERO4 Black and the HERO3 and HERO3+ models, you can use a combination of the power button on the side and the shutter button on the top to navigate through the menu system to the format SD card function.

Some of the newer models, such as the HERO5 Black, HERO6 Black, HERO7 Black, or HERO (2018) also have a small front screen, but on those models, you can’t access the settings menu with it—it’s only for switching shooting modes.

The camera then starts the formatting, and the camera’s light and the trashcan icon on the screen will both start blinking to denote that the formatting is in process. The blinking will stop once the process is complete.

The GoPro mobile app also includes the function to format the SD card.

Again, the terminology hasn’t always been completely consistent between versions of the app, and it’s not consistent between the camera’s menu and the app’s menu, but the current version of the GoPro app calls it “Delete All Files from SD Card”.

While it’s best practice to format the SD card in the GoPro camera itself, it is possible to format it using a computer. There are a couple of main options and some things to watch out for.

There’s nothing complicated about using this app—the whole point is that it’s a foolproof way to use the appropriate format for the type of card—but I’ve put together a more detailed walk-thru here.

As for the formatting type, there are some specific requirements according to the size of the storage capacity of your memory card. If it’s 32GB or smaller, choose FAT32, which conforms to the microSDHC standard. If it’s 64GB or larger, choose exFAT, which is what the microSDXC standard specifies. 2

How to Recover Data from a microSD Card

If you’ve accidentally deleted videos or photos from your GoPro’s microSD card, there’s still a good chance that you can recover it.