How to Add GoPro HERO 4 Filters and HERO 3+ Filters

Here’s a rundown on how of a way to use GoPro HERO 4 filters and GoPro HERO 3+ filters. There are a few different methods for doing that. This is one of the most flexible.

So why might you want to add filters to your GoPro HERO 4 or HERO 3+? The image quality and video quality of these cameras like the is remarkably good in a wide range of conditions right out of the box. It’s a huge improvement over previous generations of GoPros. But there might be times you want to tweak the shooting by using filters. And probably the two most useful filters–at least, above water–are a polarizing filter and a neutral density filter. Both reduce the amount of light hitting the sensor, but they do it in different ways and with different uses.

I’ve previously written about how to attach a polarizer filter or underwater red filter to a GoPro HERO 3. Because of the different lens port on the HERO 3+ Black and HERO 4 Silver and Black, you have to do things a bit differently.

There are two versions of this kit available. The difference between them is in the lens mount adapter to accommodate the different shapes of the lens portals on the housings.

One is for the HERO 3 housing (check price and availability on Amazon).

Fotodiox Pro WonderPana Go H3+ and HERO4 Standard Kit with Three Filters...
Check Price on Amazon
The one I’m focusing on here is the version that fits the slimline housing. The kit was originally released for the HERO 3+ Black, but the HERO 4 Silver and HERO 4 Black models use the same shaped lens port on the housing, so these filters work well on those newer models too.

The lens mount adapter is machined metal and is shaped specifically for the housing that comes with the HERO 3+ Black, HERO 4 Silver, and HERO 4 Black models. It slides over the barrel of the lens portal on the waterproof housing. It’s a tight fit–very tight. If you don’t get it all the way on you’ll end up with bad lens vignetting (ie. black area in the corners of the frame). The snugness is by design, but I found it hard to get all the way on and even harder to get it off again.

Once you have it on, there’s a small screw that locks on by using pressure. A small screwdriver is provided in the kit for this, but any flat-bladed jewelers screwdriver will work. I found that the fit was tight without using the locking screw, but it makes the attachment more secure.

Once you have the adapter mounted, the filters screw onto it using a regular filter thread.

The adapter is small enough that you can leave the adapter on full-time. It blocks the front LCD a little, but not much. And it makes it a little harder to get a grip on the top locking clasp of the case when it’s in the locked position.

A polarizer filter helps reduce glare. They can deepen the blues of a blue sky, intensify the color of water, and add detail to snow, sand, or ice. I have more on polarizer filters here.

Here are some examples of the effect using the filter from this kit on a GoPro HERO 3+:

In practice, there’s a catch in using a circular polarizer on some of these models of GoPro. To use the filter properly you need to see the effect of the rotation in real time through the lens. Without that real-time view, you’re just guessing. The view can be either with a through-the-lens viewfinder or a built-in through-the-lens display. But of these cameras, only the HERO4 Silver has the display built-in.

There are workarounds, but none is ideal:

There’s another thing to watch out for: in some of the wide-angle shooting modes you end up with bad lens vignetting on the corners. It is possible to get slim polarizers to help alleviate precisely this problem, like this one from Hoya, but the one in this kit is a regular thickness. (I should mention that I haven’t tested a slim polarizer on this specific adapter to see if it fully solves the vignetting issue, so I can’t say for sure whether it will, in fact, work in this instance.)

In still photos, that affects shots taken with the Wide FOV setting. It also affects video shot in 1440, 1080 Super, and 720 Super modes.

In regular 1080 mode you don’t have the same problem:

I do have a few quibbles with this setup.

For one, because the filters stay outside the waterproof housing, they don’t affect the waterproofness of the camera housing itself. But also because they stay on the outside of the waterproof housing, they are not themselves waterproof. They seal reasonably well using the screw thread, and spray or light rain shouldn’t present much of a problem, but it’s not a perfect seal and water, and dust can find its way in. The circular polarizer is especially vulnerable because it has an extra rotating layer that water can get in between. The method used for mounting these filters isn’t suitable for adding a red filter for underwater photography.

For another, the filter case adds bulk. We’re not talking a lot, but since the small size is precisely part of the appeal of the GoPros, it’s not irrelevant. The filter kit case is larger than the camera in its housing.

I was originally most interested in adding a polarizer filter and neutral density filter to the GoPro HERO 3+. For both, the optical quality is much better than other options I’ve tried with gels placed inside the housing on the HERO3. It’s also much more convenient than the internal methods.

The main negative for me is the lens vignetting using the circular polarizer in some shooting modes. It’s not a dealbreaker, but it is a bit of a pain and something to watch out for.

Overall, while the Fotodiox Pro WonderPana Go H3+ Standard Kit isn’t perfect, but it is an effective way of adding polarizer or neutral density filter to a GoPro HERO 3, HERO 3+ Black, HERO 4 Silver, or HERO 4 Black where the optical quality of the filters is a step up from some of the other offerings out there.

You can find the Fotodiox Pro WonderPana filter kits at B&H Photo and Amazon. There’s also an underwater kit that compensates for the lack of red and orange light as you dive underwater (also at B&H Photo). 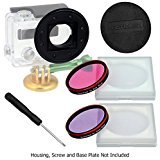 Images and product information from Amazon PA-API were last updated on 2022-07-05 at 02:48. Product prices and availability are accurate as of the date/time indicated and are subject to change. Any price and availability information displayed on Amazon Site at the time of purchase will apply to the purchase of this product.

How to Add GoPro HERO 4 Filters and HERO 3+ Filters