The Gekkopod is a new product that’s designed as a go-anywhere, attach-to-just-about-anything mount for GoPros, smartphones, and compact cameras.

The Gekkopod is a new product from Zuckerim Inc, an Israeli product-design and mass production company, that’s designed to be a go-anywhere, attach-to-just-about-anything mount for GoPros, smartphones, and compact cameras. It’s pitched as the world’s most flexible mount. Its closest competitor is the Joby GP1 GorillaPod, but there are some key differences. The GorillaPods use a ball-like system for its three legs. They’re bendable but are there’s enough resistance to hold their shape against light force. So you can wrap them around poles, fences, handlebars, or straps. There’s also a magnetic version that has small magnets in the end of each leg that adds more options on where you can mount it in place. The Gekkopod is a similar idea, but it has five legs and they’re flat. The extra legs provides more opportunities for stabilizing, and having them flat both gives them a bit more surface area to grip as well as means they can be poked through spaces where the GorillaPod can’t go. Things like chain links, etc. While the silicon skin doesn’t have the same magic sticking qualities of a real gecko’s feet, it does add some friction to help keep it in place on slick surfaces. And with five feet, you can also configure it in such a way that it becomes a smartphone stand by itself (check out the video below to see what I mean). You can also move the screw mount to the end of one of the feet, creating yet more possible configurations with the legs. The overall package is lightweight (1.6 oz) and small and fits easily in your camera bag, so it’s one of those things you can just throw in just in case. 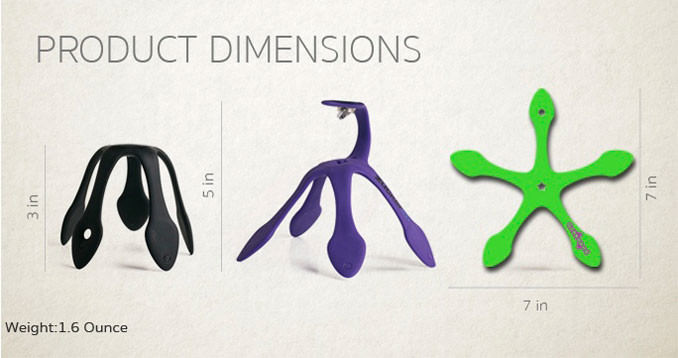 I’ve used it mainly with a GoPro HERO4, but there are also configurations with a smartphone cradle or a small ballhead for mounting regular compact cameras (the different levels of funding have different choices for the mount–you don’t get all of them in the standard configuration). It’s designed mainly for pocket-sized devices–things like GoPros, smartphones, and small compact cameras. Zuckerim has already completed development of the Gekkopod and is using its Kickstarter campaign to fund mass manufacturing (that is, they’re selling the first run to fund further production). Estimated delivery of the finished product is October 2015. I don’t know whether there are any plans for future upgrades, but adding magnets to the feet would add even more options for putting cameras in unusual places.