If you find that your GoPro’s battery is draining quickly even when the camera is switched off, here’s a troubleshooting checklist of things to try. 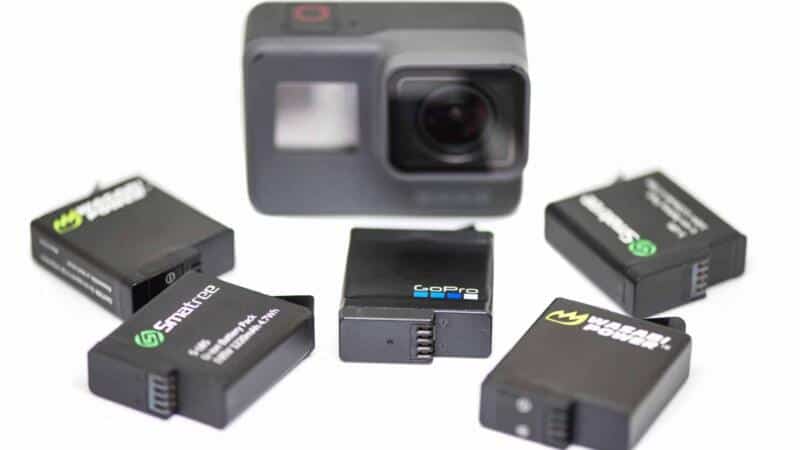 If you’re finding that your GoPro’s battery is draining even when the camera is switched off, you’re not alone. It has become something of a notorious and long-running problem with GoPros cameras.

It also isn’t specific to one particular model–I’ve run into the issue myself with HERO3s, HERO4s, and HERO5s; I’ve seen it less in more recent models. GoPro has put out some firmware solutions that fix it in some cases, but for some reason, they’ve never been able to stamp it out completely. Complicating matters is that it seems to be a symptom with several possible causes.

First, though, to be clear about what I’m talking about here, it’s when you’ve fully charged the battery, leave the camera switched off overnight, and come back the next day or within a few days to find that the battery is significantly drained. Maybe there’s only half a charge left; maybe there’s less. Crucially, this is while the camera is turned off. (If the power is draining while the power is on, well, that’s to be expected, after all.)

A slight drain is normal. If you come back a few weeks later and the battery isn’t fully charged, that’s pretty normal. But it shouldn’t be draining in hours or even a few days when the camera is off.

I’ll say upfront that I don’t have a magic one-size-fits-all solution. So far as I’m aware, there isn’t one (short of removing the battery from the camera, which isn’t especially convenient–nor should it be necessary). But what I can do is put together a consolidated list of troubleshooting steps to try. Any one of these might solve it in your camera’s case, but I’ll start with the ones that seem to work most often and are the least disruptive. Most of these apply to any recent GoPro. Some are specific to the HERO5 models.

Leaving the wifi on is the most common reason for battery drain even with the power off. Even if the camera is powered off, leaving the wifi on will gradually suck power as the system regularly polls for a signal. Make sure that you don’t have the blue flashing light showing that the wifi is on.

Ideally, do it manually rather than using the automatic update feature. And do it even if your camera already says it has the latest version. Here’s the link for manual firmware updates.

Upgrading the firmware is especially important if you’re using the HERO5 Black. In early versions of the camera’s firmware, there was a bug when using some SanDisk cards where the camera was scanning the card even when powered off and draining the battery. A recent firmware update (v01.57) addressed that issue under the vague description of “improves SD card stability.”

Lexar High-Performance 633x 64GB microSDXC UHS-I Card w/ SD Adapter, Up To...
Check Price on Amazon
Related to that, you can also try switching memory cards, ideally changing brands. If you’re using a SanDisk card, the Lexar 1000x card is a good place to start. Or the Samsung EVO Select. I’ve put together a list of other gopro sd card recommendations.

This is specific to the HERO5 models and later models (earlier models didn’t include voice control).

Again, this is specific to the HERO5 and later models (earlier models didn’t include the GPS feature).

To be honest, this is unlikely to solve the issue, and I haven’t actually heard any confirmed reports of it doing so. But under the same principle as turning off some of the other settings, it can’t hurt to turn the GPS off too to be extra certain it’s not polling for a signal even when off. And it’s easy to do–the setting on the HERO5 Black is under Preferences > Regional > GPS.

Replace the Battery with a New One

Not all GoPros have user-replaceable batteries. But if you’re using one of the models where you can take the battery out, it’s worth trying a different one.

It’s possible it’s a faulty battery. Maybe the battery isn’t holding a charge, or maybe it’s not actually fully charging in the first place, even if it says that it is. Lithium batteries don’t suffer from memory effect as badly as some other types of rechargeable batteries, but over time they can start degrading. Their performance can also deteriorate if they’ve been completely discharged or overcharged.

If you replace it, ideally make it a GoPro-branded one. To be clear, I’m not suggesting that non-GoPro batteries aren’t any good. Some of them are, and I’ve been using many over the years with great results. I’ve even recommended some, especially because they can be more cost-effective. But the reason I’m suggesting here that you stick to GoPro-branded ones is in case you end up having to escalate the issue to GoPro support or want to try to file a claim under warranty. Using a third-party battery is an easy red flag for support techs to point to, even if it doesn’t end up being the cause of the problem. So you can potentially save some time and aggravation by going straight to a GoPro-branded one. Unfortunately, they’re usually more expensive.

And charge the battery with one of the recommended GoPro accessories.

You don’t need to go to great lengths to fix this–just putting the camera in an inside pocket of your jacket for a while to warm it up a bit should help. But definitely don’t put the camera near a strong heat source like fire—nasty things can happen when you mix lithium batteries with very hot temperatures—and do not under any circumstances put it in an oven or microwave. What you’re shooting for is around room temperature, which is where lithium batteries work their best.

Do a Hard Reset

You can reset the camera to factory defaults to see if that fixes the issue. It’s a bit of a hassle because you’ll lose any settings you’ve changed. I’ve put together some guides to resetting specific models:

Keep the Battery Out of the Camera When Not Using

This isn’t convenient, but so long as the battery itself is healthy, it works.

Try to Get a Replacement

If you only bought your camera recently, the place you bought it from might be open to replacing it. It’s at least worth asking.

If none of this solves the problem, you can reach out directly to GoPro support–here’s the GoPro support contact link.

Images and product information from Amazon PA-API were last updated on 2022-09-25 at 21:38. Product prices and availability are accurate as of the date/time indicated and are subject to change. Any price and availability information displayed on Amazon Site at the time of purchase will apply to the purchase of this product.