Newer GoPro cameras use both Bluetooth and WiFi wireless connections. But they use each for different things. 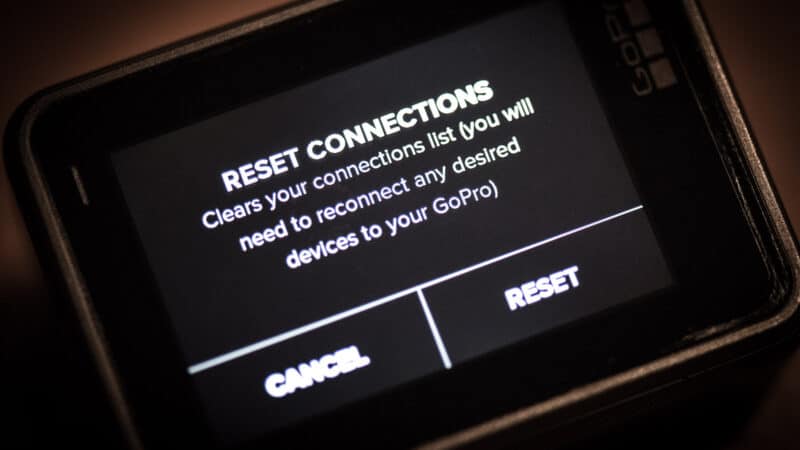 Most of the GoPro cameras since the HERO4 use both Bluetooth and Wifi for remote connections. (The earlier models that supported wireless connections only used WiFi.)

But these are not used in an “or” way. That is, they’re not interchangeable. They’re used for different functions, and the way they’re used also varies by model.

The big advantage of Bluetooth technology is that it uses less power. And that translates to longer battery life for your camera. Which is a good thing.

But that low-power mode doesn’t work with some processor-intensive operations like live preview or playing back media from the camera.

Which specific wireless connection type is used for what depends on the camera model.

The way in which GoPro cameras have implemented Bluetooth and WiFi varies according to the model. Newer models rely more heavily on Bluetooth before switching over to WiFi.

Wireless Behavior on HERO4 to HERO7

For the HERO7 cameras and older, Bluetooth is used to wake the camera from its low-power standby state. All the other operations then switch to wifi, including camera control and transmitting image data between the camera and your phone’s Quik (GoPro) mobile app.

Wireless Behavior on HERO8 to HERO10

On the newer models–that is, from the HERO8 on–while Bluetooth is also still used for camera wakeup, it’s also used for camera controls, changing settings, and similar functions that require light data transfer.

For the more intensive data transfer functions, such as through-the-lens previews and playing back media from the memory card, the camera will prompt you to establish a WiFi connection.

For those features, the camera uses wifi.

So a GoPro uses a Bluetooth wireless connection for some things, such as establishing a connection and basic camera controls and changing settings.

It uses a WiFi wireless connection for more data-heavy processes such as transmitting preview images.

There are, however, some specific differences between some models on which wireless type is used for what type of feature.

These cameras predate GoPro’s adoption of Bluetooth technology, so WiFi is the only type of wireless connection available.

How Do You Switch Between Bluetooth and WiFi on GoPro Cameras

You can’t manually switch between these types of wireless connections. Bluetooth is the default wireless connection type. The camera will only prompt you to establish a WiFi connection when necessary (check the camera model number information above to see when that is for each specific GoPro model).

Something worth mentioning, though, is that while Bluetooth uses less power, that’s still very relative. Maintaining a wireless connection to your phone app is going to churn through your camera’s battery significantly more quickly than turning the wireless off. So disabling Bluetooth—and all wireless connections—is a good initial step if you’re trying to maximize your GoPro’s battery power.

The disadvantages of Bluetooth—and this is where WiFi comes in—are that it has limited range, and it’s not good for transferring large amounts of data. So streaming video over Bluetooth isn’t practical, for example (although audio-only streams, which use less data, are certainly doable, as you can see in any Bluetooth headphones). 1

One advantage of GoPros using Bluetooth as much as possible is that it frees up your phone’s WiFi channel. That means you can maintain a connection between your iPhone and the internet for longer. Once you have to connect to your GoPro for anything that requires a direct wifi connection, that direct connection will replace your phone’s connection to the internet.