GoPros don’t have built-in exposure bracketing. But this third-party app adds the feature, which is useful for HDR blending or exposure hedging or more sophisticated creative methods. 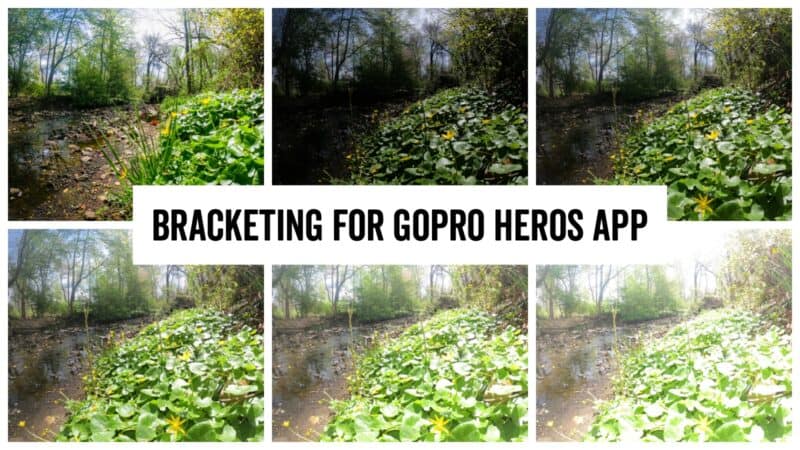 GoPro cameras include a bunch of different functionality when it comes to taking photos.

In addition to standard individual photos–saved as RAW or JPG), burst photos, and timelapse photos, newer GoPro models include processed enhancement tools such as built-in HDR and other on-the-fly enhancements under the umbrella term of SuperPhoto.

But you have very little (i.e., basically none) control over these processed enhancements. And in my experience, the results can be maddeningly inconsistent to the point that I rarely use that feature even though it would, in theory, be useful for overcoming one of the weaknesses of using GoPros for shooting photos: the relatively narrow dynamic range of the sensor.

So what if you want more control over the HDR process? HDR merging software ranges from the simple yet effective tools built into apps like Lightroom to much more powerful and sophisticated apps like Aurora HDR or Photomatix that give you fine-grained control over the merge settings. And while you lose the convenience of the in-camera processing, you can get far better results by taking the HDR process out of the camera and putting it in the hands of dedicate HDR blending software. 1

But one thing that GoPros don’t have is a built-in bracketing function. It’s a fairly standard feature on more advanced traditional cameras, but it doesn’t turn up on GoPros. It would seem like a pretty straightforward addition that could be added through a firmware update, but it has apparently not made the cut for inclusion (yet).

There is, of course, the manual option. You can shoot the series of bracketed images by changing the settings manually between shots. But that’s tedious and has the risk of missing a shot or moving the camera (controlling the camera through the GoPro Quik mobile app can reduce that last risk).

There’s an App for That: Bracketing for GoPro Heros

If you find yourself needing bracketed images, there’s a better option: an app called Bracketing for GoPro Heros. It’s an app developed by Austrian developer Harald Meyer. This is one of several apps he’s developed for extending the functionality of GoPro cameras; they’re along the lines of qDslrDashboard in terms of unlocking and extending the camera’s functionality and access to settings.

When I think of bracketing, the first thing that comes to mind is exposure bracketing. That’s the most traditional type of bracketing. It’s the one you’d use for HDR blending. It’s also useful for hedging your bets in tricky lighting situations.

But a neat feature of this app is that it goes beyond that traditional type of exposure bracketing. You get control not only over exposure settings like shutter speed, ISO, and exposure compensation (you can’t control aperture on a GoPro–it’s fixed), but you also get controls over a bunch of other Protune settings. You can even combine the bracketing with intervals, which opens some interesting possibilities for day-to-night style photos made famous by the foremost master of the style, Stephen Wilkes.

You can set specific settings for each image in the bracketing series. Some of the settings you can control include: white balance, exposure compensation, shutter time, min/max ISO, color mode, FOV, and so on.

I’m focusing here on the most straightforward kind of exposure bracketing. And even though GoPros give incomplete and sometimes only indirect manual exposure settings, there’s a very simple way to do simple exposure bracketing without messing around: just use the exposure compensation function (listed as EV Comp and not to be confused with GoPro’s Exposure Control function, which, while also related to exposure, is a different tool). 2

The exposure compensation setting on GoPro cameras gives you up to two stops above and below. If you need more than that, you’ll need to mess with other settings as well such as ISO and shutter speed. But for our purposes here, that’s going to be plenty to give a good illustration of how the app works.

The app is built around the concept of presets, so once you’ve created a preset, it remains ready to reuse again anytime. And if you’ve used a simple relative exposure setting like exposure compensation (as opposed to an absolute manual exposure setting), then you’re all set to go regardless of the lighting in the scene you’re shooting.

For example, I’ve created a simple 5-shot series of -2, 0, +2 exposure compensation. You can do longer sequences, but something to bear in mind is that each frame has to be created individually, which makes it cumbersome for very long sequences such as time lapse. But there is a copy command that you can use to duplicate the settings of an individual shot.

That kind of exposure compensation sequence is very simple, but it’s the kind that’s useful for HDR blending or hedging exposure. But much more sophisticated sequences are also possible.

One of the neat features of this app is that there’s no reason the series has to be of the same type. What I means is that the sequence doesn’t just have to be all exposure compensation settings. Or all shutter speed settings. Or even all of the same shooting mode (photo, live photo, night photo, burst). You can mix and match setting types from shot to shot and even combine shooting modes to take, say, a regular photo and then a live photo or night photo.

The app runs wirelessly over Bluetooth LE on all platforms. It does not work over a USB cable.

That includes the Window and macOS computer versions. So your computer will need to support the necessary Bluetooth protocols. You can find more details under the System Requirements section on the developer’s website.

There are versions for desktop (Windows/Mac) and mobile devices (Android/iOS/Raspberry Pi) I’m using the version for iOS on an iPhone.

Apple and Android phones typically have Bluetooth LE support built in, so there aren’t any special requirements there. But that’s not true for all computers. You can find the system requirements (and workarounds) for Windows and Mac computers here.

The one I’m using here is the iOS version. Since I mostly use my GoPros out and about, the mobile portable option is more useful to me than running from a computer.

I’ve been using it with a GoPro HERO9 Black.

At the time of writing, the list of compatible cameras is:

The app’s changelog says that HERO10 Black compatibility was added with version 1.0.3. I tried using 1.0.4 with a HERO10 but couldn’t get it to work properly. I’ve reached out to the developer with the information and will update here if it’s resolved.

It also works with the Night Photo function on GoPros. And the Live Photo and Burst modes.

The way this works is that the app changes the Protune settings first and then takes the photo (or burst). In practice, that means that the settings of the last image remain in place after the sequence is finished. That’s not an issue if you’re always using the Bracketing for GoPro Heros app, but if you’re using the app and then shooting another way, such as manually, you’ll need to first make sure that the shooting settings are changed back to where you want them.

For what it’s worth, here are some things I’d love to see added or tweaked:

The MobileCameraApps channel has put together several short demo videos that show the app in action on different platforms. 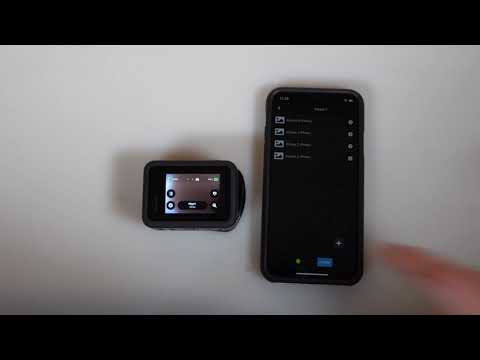 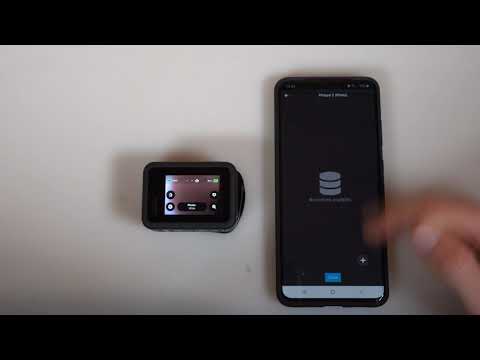 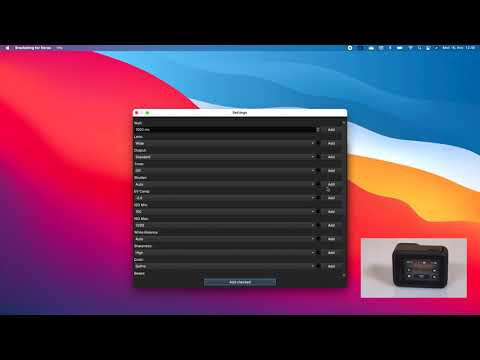 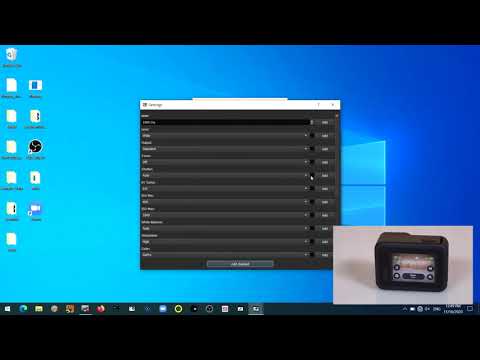 I’ve only just started playing with the Bracketing for GoPro Heros app, but I can already see how useful it can be. To be sure, it’s a fairly specific niche. But when you need it, it’s a nice tool to have in your toolbox.

If you’re looking to shoot bracketed images with your GoPro, it’s well worth checking out.

It’s a paid app but very reasonably priced at $5-$6 as a standalone app. You can also get it bundled with some of the developer’s related apps. You can find the full collection of software tools for GoPro cameras from this developer here. There are webcam tools, live streaming tools, and even one letting you control your GoPro from an Apple Watch, which I’m keen to check out.

If you’re interested in extending the built-in functionality of your GoPro, I also recommend checking out GoPro Labs. It’s a relatively new initiative of GoPro that is basically an experimental playground created by GoPro engineers. You can find it here.