For in-the-action shots of fun at the beach, a GoPro is hard to beat. Here are some tips for using your GoPro at your next family beach vacation. 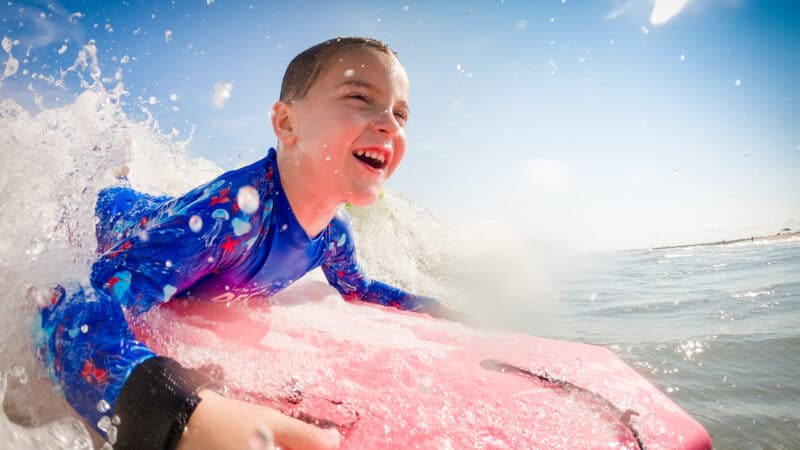 GoPro marketing is swamped with images and footage of epic adventures. From surfing 30-foot waves to swimming with sharks to racing down a mountain peak in pristine powder snow.

But not all of us are living life on the edge like that. And for some of us, some of our favorite photos that we will ever take are of our kids having loads of fun. They might not appear in National Geographic, but stick them on the wall, and they can bring a smile for years to come.

And what better place for pure fun than the beach?

That’s who this post is for: the person who wants to use their GoPro to take fun family shots at the beach. I’m not going to get all bogged down in technical info here. And I’m not talking about one specific GoPro model. I’m just going to suggest some tips based on my own experiences in taking many, many photos of my kids having fun at the beach. Some of these tips are obvious; some are less so. But with luck, it might just help someone capture some wonderful family moments.

If I have to take one camera with me to the beach, there’s a clear choice: a GoPro. I have plenty of other cameras, including some excellent waterproof models that are fancier cameras and more expensive. But for sheer fun and foolproof beach action, a GoPro is what I reach for. I don’t have to worry about it getting wet or banged up. And, most importantly, I’ve gotten some of my favorite photos of my kids with a GoPro—the types of shots that just bring a smile to my face every time I see them.

But I should also clarify that when I talk of family photos, I’m talking about action and candid shots. A GoPro just isn’t a good choice for a traditional family portrait with everyone decked out in their finest capris. The super-wide fisheye lens adds too much distortion and can be unflattering (linear FOV can help a little, but doesn’t really solve it). But for in-the-action shots of fun at the beach, a GoPro is hard to beat.

Top Tips for Using a GoPro at the Beach

The tips I’m focusing on here mostly apply to any GoPro camera (or any other action camera, for that matter). I’m lucky enough to have the latest GoPro models on hand, but you don’t need the latest and greatest camera to get fun family photos at the beach.

If you’re looking to buy a GoPro, though, the latest models do tend to have both the newest features as well as improved image quality. While GoPro updates tend to be incremental, the improvements to image quality can make a noticeable difference in the high-contrast scenes of sun and shadow you’re likely to get at the beach.

Here are some accessories I’ve found useful for shooting family photos at the beach with a GoPro.

Using a GoPro In the Waves

My kids love bodyboarding (or boogie boarding). It’s like every wave is as much fun as the first one they ever caught.

You don’t need big waves to get fun photos. By getting in close and getting down low, you can exaggerate the drama of the moment. With luck, there’ll be water flying and a huge smile on their face.

I’ve tried a bunch of different combinations for taking photos of them playing in the surf. The one that has become my go-to setup is using a trigger mount. Specifically, the mount part, without the dome, from the dome. It floats, and it’s very strong. It’s also not sharp, so there’s no harm if it bumps someone in the rough and tumble of the waves.

With a wrist strap firmly attached around my wrist, my hands are still free to launch the kids on waves–I can even launch two at once. And it’s not a hassle to hold even when you’re just enjoying the moment rather than shooting.

For settings, I use burst mode and continuous photo extensively. It maximizes the chances of getting a good shot, even if it does mean that you’ll end up with an awful lot of reject images to delete.

I also recommend locking the back screen. Water can do some odd things when it contacts the camera’s touch screen. And that’s especially important if you’re using a trigger grip, because they tend to block most of the back screen.

Under normal circumstances, I usually turn off the beeps. But in this situation, I like to turn them on, and to turn them on to the loudest setting. It’s a nice bit of feedback that the camera’s working when you can’t see the screen and there’s a lot else going on in the waves.

I’ve found no perfect solution to keeping water drops off the lens. I’m in the habit of a quick, forceful blow of air on the lens right before the wave comes and then maybe a quick dab on the fabric on the shoulder of my rash guard. A water beading agent like RainX can help, but it won’t necessarily solve the issue.

Mounting a GoPro to a Body Board

It’s also quite possible to mount a GoPro to a bodyboard–GoPro even makes a dedicated mount for that. It’s easy to install, but it’s beyond the scope of this post and I’ll cover it separately. It’s worth knowing, though, that the bodyboard mount requires you to drive a hole through the board. That’s probably not an issue for a cheap board like the ones you can get at beachside stores, but it might not be something you want to do with a fancier board.

I’ve tried mounting a GoPro on my kids’ boogie boards a few times but have never been that impressed with the shots I’ve gotten from it. But you might get better results, particularly in larger waves, so if it’s something you’d like to try, it’s absolutely possible to do, and your mileage will inevitably vary.