How to Make a GoPro Float

There’s a good chance you’ll be wanting to take your GoPro in the water. But you’ll find out pretty quickly that GoPros don’t float. So here’s a rundown of options for keeping your GoPro afloat. 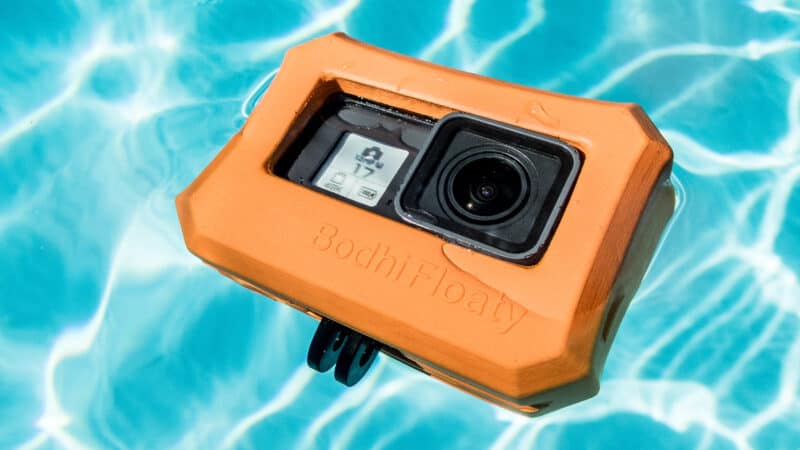 There’s a good chance you’ll be wanting to take your GoPro in the water. But you’ll find out pretty quickly that GoPros don’t float. So here’s a rundown of options for keeping your GoPro from disappearing into the ocean depths.

A much better option for handholding is a floating handle. They’ve become known as bobbers, and there’s a large number of different ones available. They all do fundamentally the same thing: provide a handle grip that is thick enough to add enough buoyancy to keep the camera afloat (usually hanging upside down). Some have minor tweaks like better grip, telescoping extensions, or storage compartments.

Again, these are very simple to use. They give you the added benefit of a handle grip. And they’ll work with any GoPro model, frame, or housing and don’t block the back screen.

Something worth noting is that the product listing for these often list compatible GoPro models, but the listings aren’t always up to date. But a virtue of these standardized attachments is that they’ll work with any GoPro–or any other action camera that uses the same GoPro-style attachment, for that matter.

GoPro’s The Handler. This is the latest version of GoPro’s official bobber accessory. And while it looks much the same as most of the others, it has some small tweaks that I like. For one thing, it has a quick-release clip built-in. If you’re switching the cameras between mounts, the quick release clip is infinitely simpler and easier than unscrewing from the three-tongued attachment. Secondly, the clip is at an angle. That might seem inconsequential, but I find that it’s good for shooting at a more comfortable shooting angle with less risk of getting parts of the handle in the frame.

Tip: If you have a GoPro Plus subscription you can get 50% off The Handler (as well as a bunch of other accessories).

Basic Bobber. These are about as simple as it gets. It’s a hollow plastic handle filled with air. On one end is a built-in GoPro-style mount point. It has a wrist strap attached. 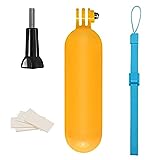 Slightly Fancier Bobber. This variation has a grippier grip and a clip on its end. These are still very reasonably priced, and I prefer the extra grip with wet hands, especially when zipping along in a zodiac.

Premium Bobber. This premium version one from CamKix has two notable tweaks to the basic design. The first is that the end unscrews and you can put in some keys or a few notes of cash to stay dry in a sealed cavity (no, your phone won’t fit). The second is that it extends to become a GoPro float pole. I like this one for kayaking because it combines the peace of mind of a float but gives the extra reach for some elevated-view shots from above, like this. 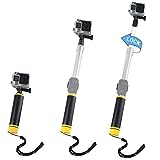 These are universal straps–there’s nothing about them that makes them GoPro specific. You can use them with other small cameras or even things like keys.

You will have to find a way to attach it to the camera. They don’t come with a dedicated way to connect to a GoPro, and GoPro cameras and housings don’t have the kind of small recessed loop attachment that many other cameras have. So there’s nothing to thread the loop through on the camera body itself. A simple solution is to thread it through the screw hole in the GoPro attachment point of a frame or housing.

A related alternative is the new line of silicon skins from GoPro that they’re calling the Sleeve+Lanyard. They include a basic wrist strap (or lanyard). There’s no flotation with them, but they at least offer the security of the strap._

These are conceptually similar to the original Floaty (below), but instead of an adhesive foam block that sticks on the back, these foam blocks have cutout cavities that encase the camera. While they look bulky, they’re very light.

They’re one of my favorite options for making GoPros float because you can use them with most other mounting options. They also give you full access to the camera’s buttons and screens. In terms of negatives, they don’t come with a strap and don’t provide the convenience of a handle grip.

They’re molded for specific camera body shapes, so you’ll want to make sure you get the right one for the model you’re using. For instance, you can get ones for the GoPro HERO7 Black, HERO6 Black, and HERO5 Black models and different ones for the smaller Session models.. GoPro has released a dedicated floaty for the new HERO8 Black.

I’ve got a more in-depth review of these here.

GoPro has had their own Floaty Back Door accessory available for years. And it’s simple: it’s a block of brightly-color foam with a self-adhesive side. You stick it on the backdoor of a GoPro housing.

Its advantage is that it has a low profile. It sticks out a little off the back of the waterproof housing, but it adds very little weight and doesn’t interfere with the usual GoPro mounts. That makes it very good for uses like surfing or mounting on the front of a kayak or boat. It’s not so good for handholding.

But it makes far more sense for older GoPro cameras than newer ones. That’s for two reasons. The first is that with older GoPros, like the HERO4 Black, you needed to put the camera inside a housing to make it waterproof. With newer models, that’s not required so long as you’re not Scuba diving. So, with newer models, you most likely need to buy a separate housing to be able to use the Floaty, such as the Super Suit for the HERO7 Black or the Protective Housing for the HERO7 Silver and White (or the different Protective Housing for the HERO10 and HERO9).

The second is that older cameras didn’t have a built-in screen on the back. Newer models do have a screen, and attaching the Floaty completely blocks it. If you’re mounting the camera on the front of a surfboard, that’s less of an issue than if you’re shooting handheld and expecting to be able to use the live view. I should mention that the touch controls on the back screen won’t work underwater, but the live view will.

So while it’s straightforward to use and effective as a float, the Floaty is a less attractive option for the newer cameras with built-in screens and that don’t come with a separate housing included. In most cases where using a Floaty makes sense, I’d lean instead towards one of the floating cases I mentioned above. 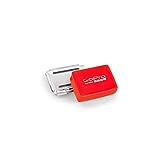 Each of these offers a solution to making your GoPro float, but some are better than others in certain situations. A bobber isn’t much good for mounting on a surfboard, for example. And the Floaty isn’t much good if you’re shooting handheld and need to see the screen.

Having tried a bunch of different float options over the years, the two solutions I reach for most often are the The Handler floating grip and the floaty case. And so far, I haven’t lost a camera to the sea floor . . . touch wood.

Images and product information from Amazon PA-API were last updated on 2022-12-04 at 18:48. Product prices and availability are accurate as of the date/time indicated and are subject to change. Any price and availability information displayed on Amazon Site at the time of purchase will apply to the purchase of this product.

How to Make a GoPro Float