GoPros don’t float by themselves. So if you let it go or it gets knocked loose unintentionally, you’ll need to add something to prevent it from sinking straight to the bottom. 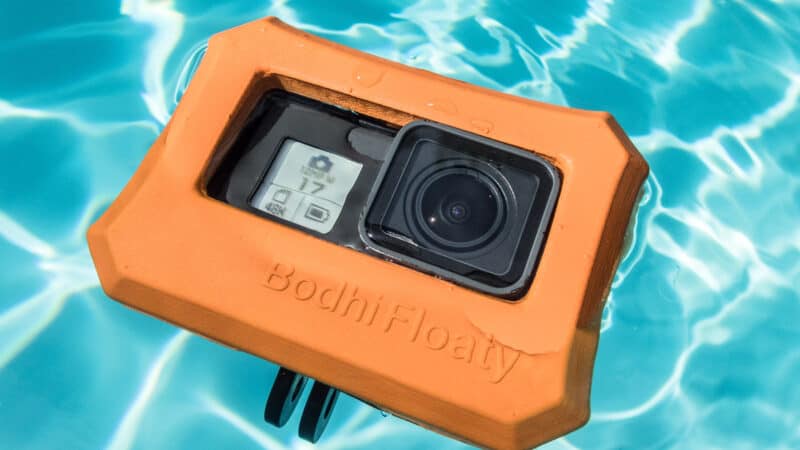 GoPros don’t float by themselves. So if you let it go or it comes loose unintentionally, you’ll need to add something to prevent it from sinking straight down to the bottom. This Bodhi Floating Case makes for a simple but effective option.

One of the simplest, easiest, and most flexible options is to put the camera inside a housing that floats. Although “housing” is overstating it a bit. It’s also not really a “case.” It’s more like putting your GoPro in a life vest.

That’s the approach used by the Bodhi Floaty, which is what I’m focusing on here. This version is designed specifically for the HERO7 (Black, Silver, and White), HERO6 Black, HERO5 Black, and HERO (2018)–it’s cut for their shapes so that the camera fits in snugly as well as being able to access the buttons. But you can get similar products for other GoPro models, and you can find other brands that make much the same thing.

This one is a lightweight, semi-rigid foam. It doesn’t encase the whole camera–it’s not like waterproof housing. It just wraps float foam around the sides of the camera.

So it does add some cushioning protection against bumps and drops–at least, so long as it strikes the ground at such an angle that it hits the foam and not directly upon the lens port–but it doesn’t add any extra waterproofness. It does add some extra bulk, so the camera will be more susceptible to being buffeted by the wind (and wind noise) at high speed. It also makes the whole thing bigger, which can be an issue in places where it’s a very tight fit.

The foam is cut to the specific shape for the cameras that share the same body shape and controls layout as the current generation of GoPros. That includes all three models of HERO7, the HERO6 Black, HERO5 Black, and HERO (2018). It doesn’t fit older GoPros or the cube-shaped Session models. For those, you’ll need to pick up a variation that’s designed to fit those models.

You’ll also need to use the camera in the standard frame that comes with the camera. That all then insert into the float. If you just try to put the camera directly into the float without using the frame it won’t fit snuggly and there’s a good chance that the camera will come out and sink to the bottom.

There’s no real trick to installing it and nothing really to go wrong. Put the camera in the standard frame that comes with the camera, and then put the whole thing inside the float. It’s a snug fit, and it’s easiest if you slot the mount point into the hole in the bottom of the float first, but it just wraps around it.

I’ve used foam floats in the past that use a type of foam that is susceptible to tearing. But the foam here is very strong, and I haven’t run into any issues like that with this one. While it’s not indestructible, it’s as close to it as matters.

With the camera installed in the float, you can then mount it using the standard GoPro mount. So you can put it on a surfboard, for example, or anywhere else you’d typically mount the camera. You can even pair it with a floaty grip if you really want to. There is a slight recess to allow the screw to go in, although it’s a tight fit and a little harder to tighten the screw than it would be without the float.

To take it out, just do the reverse. You can remove and insert the camera from the housing in the float–sort of. But it’s cumbersome to do so. It’s much easier to take the frame housing out from the float and then work with it that way.

There are other ways to tackle the problem of making your GoPro float. I’ve rounded up some of the best options here.

As you can see from the photo at the top of the page, it does what it’s supposed to do: it floats.

This is a simple way to make your GoPro float. There’s really nothing to go wrong–there’s nothing to leak and nothing to seal, so it’s pretty much foolproof. It also happens to be one of the more flexible ways to prevent your camera from sinking to the depths because it works well with standard mounting options. 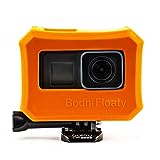 Images and product information from Amazon PA-API were last updated on 2023-02-02 at 12:18. Product prices and availability are accurate as of the date/time indicated and are subject to change. Any price and availability information displayed on Amazon Site at the time of purchase will apply to the purchase of this product.