How to Charge a GoPro Fusion

While charging GoPro batteries isn’t complicated, the specific options vary from camera to camera. Here’s a rundown of the charging and battery options for the GoPro Fusion. 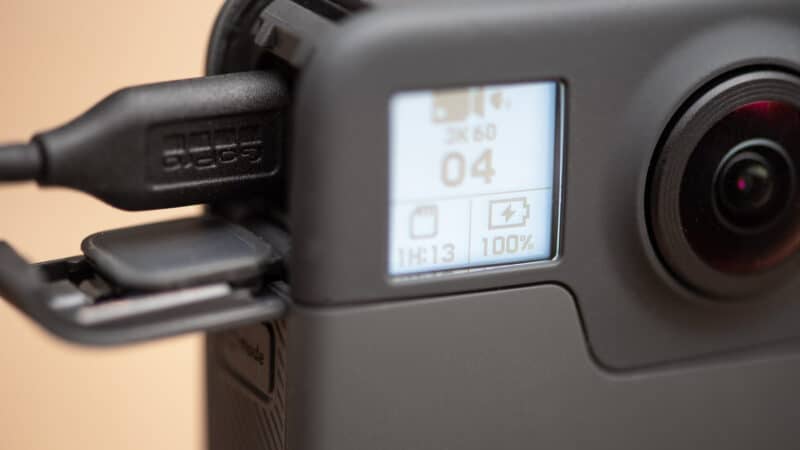 Charging GoPro camera batteries isn’t particularly complicated, but they don’t all do things the same way. There are several different battery models, and you have to make sure to get the one that’s compatible with the specific camera you’re using.

Some GoPros have removable batteries, so you have the option of taking the battery out and charging it while you swap it out with another and keep filming. Others have a hard-wired internal battery, so the only option is to charge the camera directly. Some cameras work with fast charging through USB-C, while others use slower USB charging with micro-USB or mini-USB connections. So it’s not quite as simple as saying “just plug it in.”

I’ve provided a general overview to charging GoPros before, but here I’m focusing specifically on GoPro’s new 360° camera, the Fusion. Whether you’ve just picked one up or are thinking about getting one, hopefully, this might be useful in laying out what the options are (and aren’t) for charging and powering the Fusion.

Charging the Battery in the Camera

The Fusion comes with a USB-C cable, but it doesn’t come with an AC wall charger. I have more details on power sources below, but the short version is that most standard AC wall chargers will work, as will standard USB powerbricks. Chances are, you have something like that already on hand, so you can go ahead and use the wall adapter that you use to charge your phone.

But not every USB power source outputs the same power, which means that they won’t all charge the Fusion at the same speed. I have more information on that below.

Charging the battery in the camera is simple, but it’s not always the best option. And because the Fusion uses a removable battery, it opens up much more flexibility. You can quickly swap out a depleted battery for a fully charged spare and get right on shooting. Or you can load up multiple batteries if you’re heading off the grid.

There’s no way to connect a power source directly to the battery, so to charge it out of the camera you’re going to need an external charger cradle.

While the battery looks quite similar to the batteries for the HERO5 Black, HERO6 Black, and HERO (2018), there’s one important exception–it’s much bigger. That means that it won’t fit in the same external chargers that you can use for those other batteries.

GoPro hasn’t released their own branded external charger for the Fusion’s battery, but several third-party manufacturers have jumped in to provide them. I’ve been using the ones from Wasabi Power and Smatree and found them to work well with GoPro-branded battery as well as the batteries by those manufacturers. There are also a number of other after-market versions from brands I haven’t heard of. Some probably work well, but it’s a case of buyer beware.

Spare Batteries for the GoPro Fusion

The battery for the Fusion is a 2620mAh lithium-ion battery. GoPro’s original model number for it is ASBBA-001.

GoPro Battery (Fusion) - Official GoPro Accessory
Check Price on Amazon
If you’re looking for a spare, the safest option is to go with GoPro’s own branded battery. They’re backed by GoPro, after all, which is important for two reasons. Firstly, GoPro vouches for their quality. Secondly, they’re always going to be compatible with the camera. What I mean by that is that GoPro has the capability to block third-party batteries from working in the camera. They’ve done it before, with the HERO5 Black batteries, before apparently working out some arrangement with the third-party manufacturers. For now, after-market batteries seem to be working just fine in the Fusion–I’ve been using the Wasabi Power and Smatree ones–but it’s at least worth knowing that the possibility exists for GoPro to disable them at some later point.

The catch with going with GoPro’s own branded battery is that the after-market versions are usually less expensive. A number of different manufacturers have come out with replacement batteries for the Fusion, some of which you may have heard of, and some you probably I haven’t (I haven’t, at least). I’ve been using the ones from Wasabi Power and Smatree and found them to work well. You can also find them bundled with external chargers. 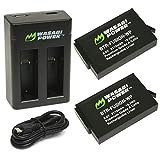 The Fusion comes with a USB-C cable, but it doesn’t come with an AC wall charger. But you can charge it with pretty much any USB power source. That said, some will work better than others in terms of how quickly they charge the battery. For the quickest charging, use a power source that outputs 5V 2.1A. You can use one with a lower power output, but the charging will take longer.

AC Wall Adapter. It doesn’t come with one. If you want to stick to GoPro’s officially recommended charger, you’ll want the GoPro SuperCharger. (Not to be confused with the older GoPro Wall Charger, which you can still find at some retailers–it will work, but it’s slower.)

You can also find other high-output chargers from other manufacturers, although I’ll include GoPro’s warning on using them:

WARNING: Using a wall charger other than a GoPro charging device can damage the GoPro camera battery and could result in fire or leakage. With the exception of the GoPro Supercharger (sold separately), only use chargers marked: Output 5V 1-3A. If you do not know the voltage and current of your charger, use the included USB cable to charge the camera from your computer.

If speed isn’t an issue, just about any standard AC Wall Adapter that you connect a USB cable to will work. Some will work better than others. There are a handful of AC wall adapters, particularly for some of the high-end smartphones and tablets, that have a higher output up to 3A. But they have a smart switching technology in them that will dial down to the safe limit for the device you’re charging.

USB External Battery. For a more mobile approach, you can use an external USB battery, sometimes also known as power bricks or power banks. Any will do, although again there is some variation in their output that will affect how quickly the Fusion’s battery will charge. Many power bricks output around 1.5A, but you can find some with higher outputs–they’re often advertised with something like a “quick charge” feature or similar wording. Some of the newest ones also output USB-C (like this one (again, you’ll need a cable with type-C connectors on both ends)).

USB Hub. You can connect a USB hub, which allows you to connect multiple devices at once. They come in various configurations in terms of both the number of outputs and the output power. Some now have USB-C outputs (but for those you’ll need to get another cable that has a USB-C connection on both ends, not just the one, as the cable that comes with the camera does).

DC Car Charger. You can also charge using a USB car charger. Most standard car chargers have relatively low output, but you can find some that have a higher output (like this one).

How Long Does it Take to Charge the Fusion’s Battery?

The amount of time it takes to charge the Fusion’s battery will depend on the method you’re using and the power source (and, of course, whether there was still any charge in the battery when you started).

With a standard wall charger, you can expect it to take around 3 1/2 hours. If you’re using a high-output charger like the SuperCharger, it takes around 2 hours.

It is possible to run the camera from external power, but the big thing you’ll want to watch for is that the USB-C plug and cable are very flush to the camera so that they don’t end up in the super-wide lens’s field of view. Removing the cover door helps too–it comes off easily. But removing the door–or just having it open with the cable connected–obviously means that the camera isn’t waterproof.

You can record while an external power source is connected, but the battery doesn’t charge during recording.

The exception is that if the Fusion is connected to a computer’s USB port, you can’t record at the same time.

Images and product information from Amazon PA-API were last updated on 2023-02-06 at 03:59. Product prices and availability are accurate as of the date/time indicated and are subject to change. Any price and availability information displayed on Amazon Site at the time of purchase will apply to the purchase of this product.

How to Charge a GoPro Fusion