The GVB 3-Axis Action Gimbal smooths out the jerkiness that comes naturally with handheld video footage shot with GoPro cameras. 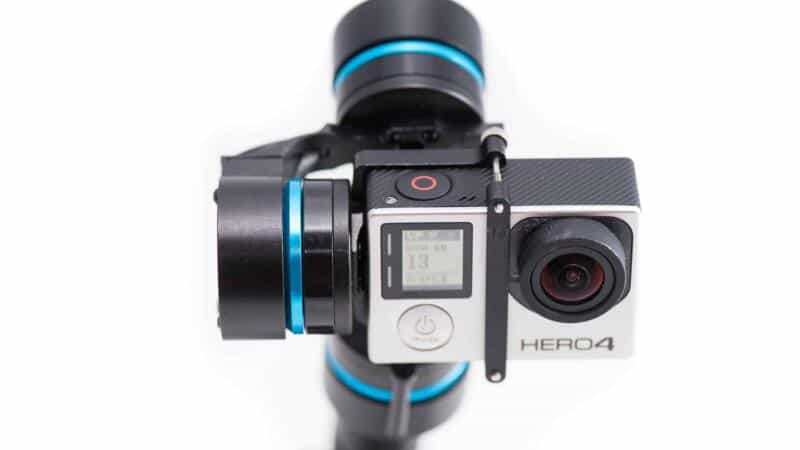 Photographers and videographers learn pretty quickly that our hands just aren’t very good at holding things still. That becomes obvious when you’re trying to shoot video handheld. Some cameras, like those in iPhones, automatically use software to smooth out the footage before you even see it. But GoPro’s don’t have onboard stabilization–at least, not yet. So if you’re shooting handheld with a GoPro, you will have run into the problem of jumpy and jerky footage, especially if you’re moving.

It’s often possible to fix it in post, but that’s a slow process, can sometimes be expensive for fancy plugins, can have very mixed results, and eats into the resolution of your footage. A better option is to get smooth footage as you shoot.

For that, you’ll need a stabilizer. They come in a variety of different types. There are two main approaches to camera stabilization rigs. A gimbal uses gyros and motors. Another approach, often known as a Steadicam after its most famous brand name, uses a weighted counterbalance and mechanical approach. Gimbals aren’t a replacement for Steadicams–while they’re trying to accomplish much the same thing, they do things differently and have their own pros and cons. When client shoots require me to shoot from a helicopter, I use something like a Keyon KS-6 gyro. It works well, but it’s big, very heavy, and not at all the type of thing you want to be using with a GoPro.

Thankfully, there are quite a few small, light stabilizers on the market now that work well wit GoPros and other action cams. Some just add dead weight, acting as counterweights hanging down below and using gravity to smooth out vibrations and small movements. The next step up are gimbals, which use small gyros to counteract small movements. They come in various levels of sophistication.

The one I’m focusing on here, the GVB 3-Axis Action Gimbal, is on the entry-level end of the market. It’s designed specifically for some GoPro cameras and GVB’s own GoPro knock-off GVB Camera.

If you just want to cut to the chase, here’s a quick rundown of pros and cons:

A gimbal is a type of camera stabilizer. They use small motors and gyros to try to hold the camera still to try to avoid sudden movement, whether that’s shaking or sharp movement. That allows you to get smooth, floating shots when the camera is in motion that, hopefully, look much more professional than shots with the tell-tale sharp movements of a regular hand-held shot. They typically come in 3- or 2-axis versions, meaning that they can stabilize small movements in some combination of vertical, horizontal, or lateral rotation. (You can also, technically, get 5-axis gimbals, but that’s a whole other level of sophistication and expense.) The one I’m looking at here is a 3-axis.

The GVB 3-Axis Action Gimbal is very much on the lower-end of the gimbal market. That’s not to say it’s inexpensive, necessarily–it has an MSRP of $229–but relative to many other gimbals it’s on the lower end of the market.

It uses a simple bar bracket, so it’s compatible with several models of action cam that in the basic shape of the GoPro HERO4 models (with the exception of the Session), including the HERO3+, HERO3, as well as GVB’s own GoPro-like camera.

It’s easy and quick to get up and running, although like all stabilizers it can take a bit of practice to get the results you want.

It’s important to install the camera before applying power. The instructions warn that failure to do that might result in damage to the motors–something I haven’t tested.

The gimbal runs on three 650mAh rechargeable batteries. There are four included in the box, along with a charger cradle for three at a time.

The batteries go into the handle shaft.

The power button is on the bottom of the handle. It’s a small black button on the end, not the larger, more obvious white button at the top of the shaft.

On the back of one of the motors–the one with the GVB logo–there’s a small blue LED light. That gives you the battery charge status. The different indications are:

Charging. It comes with a 3-battery AC/USB charger. There’s also a mini-USB socket on the underside of the handle that you can connect directly to charge the batteries without removing them. I find it much more convenient to do it that way.

Once you’ve applied power, the rest of the controls are handled by a single button further up the shaft. It’s white, but it has a blue LED behind it that flashes to indicate the mode you’re using.

Once you power it up, the camera magically rights itself to the horizon and appears to float in place.

There are three modes you can use the gimbal in. They are:

Single Press (single flash light). This activates Heading Follow mode where the pitch and roll angles remain constant, and the heading follows the handheld position. This is the default mode when you turn the gimbal’s power on.

Double Press (double flash light): This activates Heading and Pitch Follow mode. That is where the camera and roll angle remain constant, while the heading and pitch follow the handheld position.

Long Press (light stays on): this activates the Lock mode where heading, pitch, and roll are all locked to point in one direction regardless of the handheld position.

Here are some real-world examples of the effect, ranging from no stabilization and through the various modes of the GVB stabilizer.

For all of these, I was just walking at a normal pace. And I chose the bridge with railings on both sides to provide a good full-frame reference.

And in this example, I wanted to add some more jolting. It’s shot while jogging: 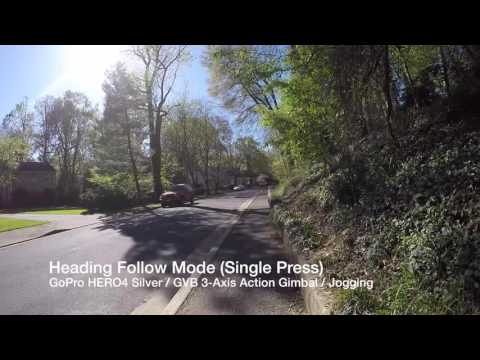 Finally, here’s an example of a real-world follow shot. As you can see, even with the decidedly unsmooth motion of toddlers, the results are pretty good. This is also walking uphill on uneven ground. 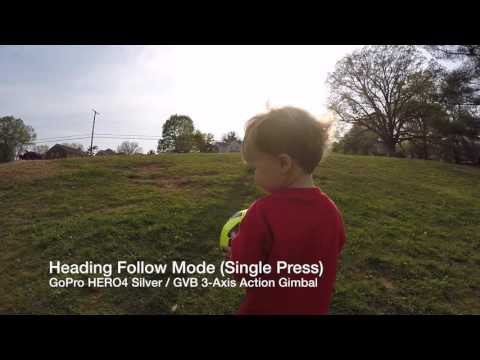 The camera doesn’t connect to the gimbal in any electronic way. The compatibility comes down to physical dimensions. It has to fit within the clamp-type mounting space and has to be within a certain window of weights (the motors won’t be able to handle a heavier camera).

(In all cases, camera has to be used without housing.)

Camera stabilizers can be complicated, expensive, and often quirky. But I’ve been impressed with how well this one works, especially given its price point and that it’s from a brand I’d never heard of. It makes a big improvement with handheld shots.

There are some things that could be improved. The whole package is pretty fragile, and especially with the exposed connector cables and lack of a case, is a bit tricky to pack without risking damage to it. And the stabilization can be prone to a bit of a sideways wobble.

And there are of course limits to the magic that the gyros can work. There’s only so much it can do if you’re jumping around and because the system is pretty lightweight it’s not going to withstand strong winds.

If you’re shooting professionally, you’ll be wanting to invest in something higher-end than this, of course. But overall, the results are surprisingly good, and it can, without much fuss or expense, make a big improvement on your handheld GoPro footage. If you’re starting out with camera stabilizers or have a tight budget, I’ve found this to be a good, capable entry-level gimbal, and I’ve been very impressed with the results. If you want to get smoother motion shots it’s well worth a look.

I bought mine at B&H Photo.