Some GoPro models have an HDMI port to output video. Here’s a rundown of which HDMI cable you need for which GoPro models. 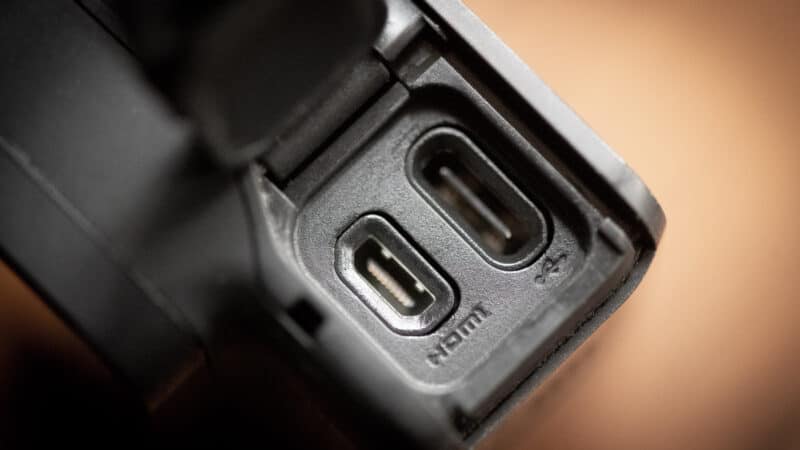 There are two types of cables for GoPros. The one that comes with the camera is a USB cable, which is used for charging as well as data transfer. Over the years, a few different USB plugs have been used. You can see which GoPro model uses which type of USB connector in my GoPro Charging Cable Guide.

The second type of cable is an HDMI cable. GoPro cameras don’t come with an HDMI cable as standard, and not all GoPro models have an HDMI port.

The HDMI port is used to output a video feed from the camera (also known as a video out signal). So if you are connecting your GoPro to a TV or monitor, an external recorder, or using your GoPro as a webcam for Zoom meetings, you’d use an HDMI cable.1

But not all GoPro models have the same HDMI capabilities. Some require an optional accessory to add an HDMI port. Some have an HDMI port built-in. And some aren’t compatible with HDMI. Here’s a rundown of which category each camera model falls into.

Since the HERO8, the latest GoPro cameras don’t have an HDMI port built into the camera, but one can be added using a Media Mod. (Be aware, though, that there’s more than one model of Media Mod; for example, the one for the HERO8 Black won’t work with the HERO9 Black or HERO10 Black–so you need to make sure you get the correct one.)

All of the Media Mods use an HDMI cable with a micro-HDMI connector.

These are the models that require a Media Mod to add HDMI capabilities:

With these models, you first need to fit the camera with the Media Mod. Then the HDMI cable goes into the Media Mod’s HDMI port.

GoPro Camera Models That Have an HDMI Port Built-in

These models don’t require an extra accessory to add an HDMI port–it’s built into the camera as a basic feature. With these, you can just connect the HDMI cable directly to the camera itself. With one exception, these all use an HDMI cable with a micro-HDMI connector.

GoPro Camera Models That Are Not Compatible with HDMI

Other GoPro models don’t have an HDMI port and one can’t be added. This includes:

Can I connect a GoPro camera to a TV or Proector?

Some GoPro cameras can connect directly to an HDTV (or 4K TV) using an HDMI cable. But not all GoPros have HDMI ports (see the lists above). Some of the very old models used different methods for connecting to a TV, either an analog RCA connection or a 2.5mm Composite Port.

What kind of HDMI connector to GoPro cameras use?

Most of the GoPro cameras that have HDMI capabilities use a micro-HDMI (Type D) connector. An exception is the HD HERO2, which uses a mini-HDMI (Type C) connector.

Do GoPro cameras come with an HDMI cable?

GoPro cameras don’t come with an HDMI cable as standard. It’s possible that some retailers might include one as part of a special accessories bundle, but that’s not standard. They do come with a USB cable (the USB cable is used for charging and data transfer).

Can you change a GoPro with an HDMI cable?

You can’t change the camera’s battery with an HDMI cable. The HDMI cable only conveys data, not power, and can’t be used for charging.

How long can an HDMI cable be?

The longer an HDMI cable is, the greater the risk that signal loss due to attenuation will start impacting the image and sound quality. With a standard passive HDMI cable, a good rule of thumb is to limit the length to around 20-25 feet, at most.

If you need to send the signal a longer distance, there are options:

Images and product information from Amazon PA-API were last updated on 2022-12-05 at 08:59. Product prices and availability are accurate as of the date/time indicated and are subject to change. Any price and availability information displayed on Amazon Site at the time of purchase will apply to the purchase of this product.