Which Accessories Will Work with the GoPro HERO10 Black?

With the GoPro HERO10 Black now out, here’s a running list of which accessories will work with the new model. 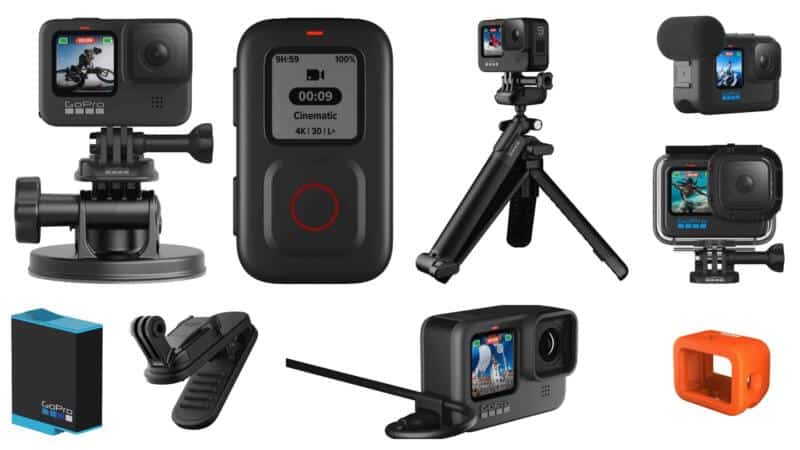 GoPro has now launched the HERO10 Black, the latest version of their flagship action camera. If you’re looking to upgrade and already have some accessories from older models, here’s my running list of what kinds of accessories will and won’t work with the new camera. This is based on my current understanding; I’ll try to update as things become clearer.

In general, most of the same accessories from the HERO9 Black will work with the HERO10 Black. The camera bodies and dimensions are the same (aside from the new fancy bright blue logo), and the ports and batteries are the same. The lens port is removable. And the HERO10 uses the usual GoPro three-pronged mounting attachment (like the HERO9 Black and HERO8 Black, it is attached to the camera body and folds down).

If you’re upgrading from the HERO8 Black–or an earlier model, for that matter–there are, however, some important differences. While anything that the camera mounts to with the attachment point will generally still work, the HERO9 Black introduced new batteries, a slightly larger camera body, and revised Mods.

This is a running list, and I’ll try to update it as I get the chance to try out accessories on the new camera.

GoPro has since released a related but different model: the HERO10 Black Bones. It’s a stripped down version built specifically for FPV drones. And while it shares many features with the HERO10 Black, it has a different body shape and is not designed to work with the same range of accessories.

New Accessories for the HERO10 Black

GoPro so far hasn’t announced any new dedicated accessories specifically for the HERO10 Black. The ones they put out over the past year for the HERO9 Black–the Mods, The Remote, and the pass-through power door–also work on the HERO10 Black (with one or two exceptions–see below).

GoPro first introduced their line of Mods with the HERO8 Black. Some of those (but not all) had to be redesigned for the HERO9 Black because of the camera’s slightly larger dimensions.

In general, the same Mods for the HERO9 Black also work with the HERO10 Black.

Media Mod. The Media Mod adds an HDMI-out port, a 3.5mm external mic port, a couple of cold shoes for mounting lights or other accessories, and a built-in directional mic. Note that the HERO8 Black Media Mod won’t work on the HERO10 Black, but the HERO9’s will.

Light Mod. The Light Mod adds a shoe-mounted light to the top or side of the camera. It’s designed to either clip onto the separate Media Mod or as a standalone light. The same model of Light Mod works with the HERO10 Black, HERO9 Black, and HERO8 Black.

Max Lens Mod. UPDATE: Compatibility with the Max Lens Mod was added with firmware update v1.2 in December 2021. This is an important exception. The HERO10 Black will be compatible with the Max Lens Mod, but it’s not currently compatible with the version of the firmware that the HERO10 Black at the time of its release. It’s listed as “Availability for HERO10 Black Coming Soon,” although it’s not entirely consistent across other pages on the GoPro website. 1 The HERO10’s built-in horizon-leveling is more aggressive than the HERO9’s, which would likely introduce compatibility issues, and it seems the firmware fix for that was not ready in time. But it sounds like a HERO10 firmware update is scheduled for November 16 that will add compatibility with the Lens Mods (as well as some other video capture modes).

Protective Housing + Waterproof Case. It’s the same housing as for the HERO9 (but different from the one for the HERO8 and every other GoPro).

The Remote. The Remote–yes, it really is called just that–is the newest of GoPro’s remotes. It’s similar to the older Smart Remote. There are a few improvements: a sharper screen (for status, not live viewing) and charging via USB-C rather than the dedicated connector that the older remotes used. In a step backward, it can only control up to five cameras at once (the Smart Remote can control up to 50). It’s compatible with the HERO10 Black. I have a more detailed review of it here.

There are some general considerations when trying to determine whether accessories you’re currently using with previous GoPro models will work with the HERO10 Black.

These are the general considerations with accessories for the HERO10 Black. My emphasis here is on upgrading from the HERO9 Black.

With those considerations in mind, here’s how some specific types of accessories do or don’t work with the HERO10 Black. This is a running list that I’ll try to update as I come across more compatibilities or incompatibilities.

The HERO9 Black uses the same kind of built-in mounting method that was introduced with the HERO8 Black. Rather than requiring a frame, it has fold-down fingers in the base of the camera.

But it’s still the same standard 3-prong GoPro-style attachment system that you’re used to from any of the old cameras. So most accessories that rely on that mounting attachment point will work just fine with the HERO9 Black. That includes things like bike mounts, bodyboard mounts, suction cups, chest harnesses, helmet clips, float handles, tripods, and selfie sticks.

Most grips and poles will work because they generally attach using the standard GoPro mounting system.

Some specialized grips, like pistol-trigger grips, require a frame mount to work properly. Right now, GoPro doesn’t have their own frame or cage for the HERO10 Black. Aftermarket manufacturers will likely make some sooner or later.

Batteries. The HERO10 Black uses the same 1720mAh battery as the HERO9 Black. You can find it here.
Batteries from other models of GoPro cameras are not compatible.

Extended Batteries. Any external batteries that use a cable to attach to the USB-C port will work. So external USB power bricks and batteries that act like that (such as this one, will work fine.

Batteries that clip onto the camera, like these, should work if they were designed for the HERO9 Black, but any for earlier models won’t, because, with those, the USB-C port and compartment are in different positions on the body.

Floats. Floats that wrap around the camera body will need to be ones designed specifically for the HERO9 Black or HERO10 Black. Again, that’s because of the different body dimensions.

GoPro has released their own, recycling the Floaty name. The design is very similar to the one for the HERO8 Black, with some small tweaks.

The Floaty is also included with the Bite Mouth Mount, useful for surfers (the bite mount part isn’t new, but the Floaty it’s bundled with is).

Sleeve + Lanyard. Again, stick with the version for the HERO10/9.

There’s no official cage yet for the GoPro Karma drone or gimbal, and my bet is that this is something that will be left to aftermarket manufacturers.

And if you buy any of them from GoPro.com, it’s worth looking into the GoPro subscription program (it used to be called GoPro PLUS). In addition to unlimited cloud storage and discounted camera replacement, one of the benefits I use most is that it offers significant discounts on many of the accessories bought through GoPro.com’s store.

Images and product information from Amazon PA-API were last updated on 2023-01-30 at 21:18. Product prices and availability are accurate as of the date/time indicated and are subject to change. Any price and availability information displayed on Amazon Site at the time of purchase will apply to the purchase of this product.

Which Accessories Will Work with the GoPro HERO10 Black?