GoPro, We Have a Problem. Does the GoPro HERO10 Black Overheat Too Easily?

I’ve seen reports of GoPro HERO10 Black cameras overheating after just 20 minutes of recording. So I decided to try for myself. 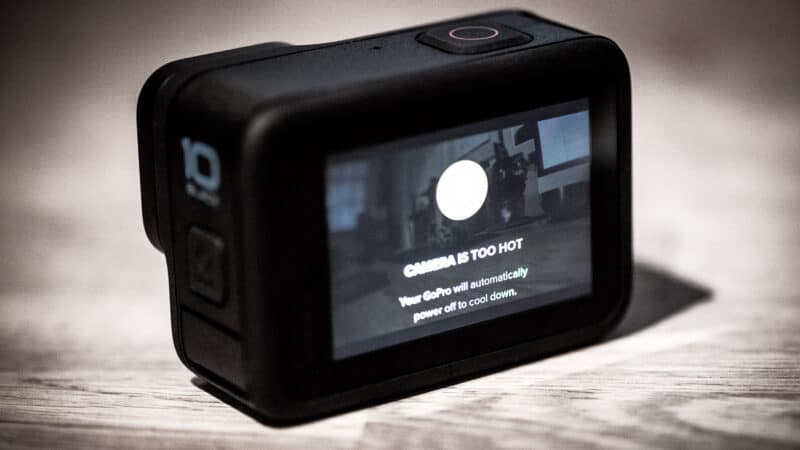 UPDATE: GoPro has released a new firmware update that adds a new Tripod/Stationary Video mode that’s designed for use in situations where there’s not much active airflow around the camera. The Tripod/Stationary Video mode reduces the video bitrate and disables the HyperSmooth video stabilization and GPS features. So it doesn’t really solve the core issue–instead, it encourages users to use less problematic video settings when using the HERO10 in situations where there’s little active airflow around the camera to draw heat away.

I’d seen reports of the HERO10 Black overheating when recording in the high video modes after only 20 minutes. If true, this is a pretty big deal and a major flaw. So I thought I’d try it out for myself.

And while I was waiting for my HERO10s to arrive, I jotted down a series of tests to run, starting with being easy on the camera and then progressively being more demanding on the processor by adding things like GPS and wireless connection, bumping up the HyperSmooth 4.0 to Boost, even increasing the ambient temperature. I’d even drafted quite a lot of the information about how I planned to run the series of several tests, along with details of the settings I’d use and the different memory cards I’d try.

The test was pretty straightforward: shoot 5K60 video from a fixed position at room temperature (around 71°F / 22°C ambient). Although HyperSmooth was turned on, the camera and scene weren’t moving, so there wasn’t much, if any, stabilization processing going on for the GP2 chip to do. The wireless connection was off. GPS was off. Video codec was set to HEVC (the only option with the 5.3K video). To keep things simple, I used the SanDisk Extreme microSD card that they throw in when you buy the HERO10 from GoPro.com. The firmware version is 01.10.00. And this is a production camera purchased through standard retail.

But here’s the thing: the HERO10 Black didn’t even pass this test. Precisely 30 minutes and 41 seconds later, the camera displayed an overheating warning and promptly shut down. And it was very hot to the touch, especially the metal parts around the lens port and the fold-down legs for the attachment point. So I let it cool for a few hours and tried again. This time, it ran for 23 minutes and 5 seconds. A third attempt the next morning (i.e., plenty of time to thoroughly cool inside and out) ran for 26 minutes and 27 seconds. I then tried it with HyperSmooth turned off, but I was surprised to find that it didn’t fare any better. I then tried 4K120 with HyperSmooth off, and it ran for 22 minutes and 56 seconds. So I think we can safely say there’s a pattern emerging here.

It was at this point that I noticed that I was actually using the Standard bitrate setting. Logically, I’d expect that to be easier on the camera’s heat. Yes, it involves more compression, but it also means a smaller datastream being written to the memory card. So I tried 5.3K60 with the High bitrate setting. But the results were about the same: about 27 minutes.

To put it bluntly, that’s not good enough. The camera needs to reliably shoot for more than 20 to 30 minutes without overheating. Now, earlier models can also have overheating issues in warm conditions. And I’ve run into that too. And other cameras have also had this problem–the Sony RX0 is a notable example. But this is different. This is not in warm conditions. And this is not with all the bells and whistles enabled. 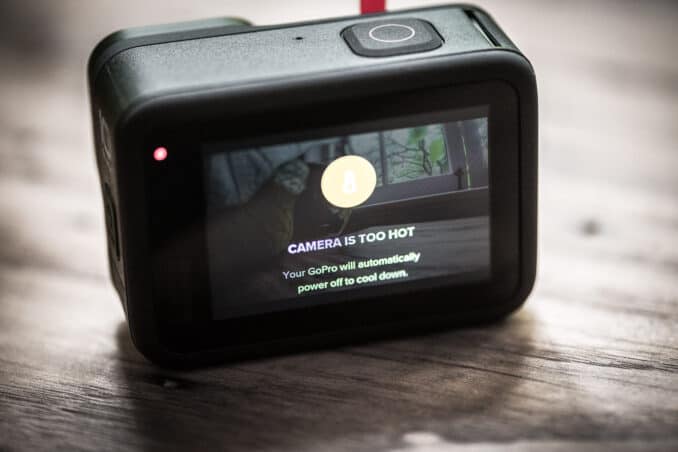 To be very clear, this is a long way from a rigorous scientific test–it’s purely anecdotal. I don’t see any point in continuing the tests, because they’re already failing under the simplest of conditions. And troubleshooting this is something GoPro’s engineers are better positioned to do.

So all I can say is what I found with the first of my GoPros that I pulled out of their case–I can’t draw broader conclusions. I can’t say whether it affects all GoPros or even most of them. But combined with a growing number of other reports online, it seems quite clear that there’s a problem with the HERO10 Black. And it seems widespread enough to really make you wonder how GoPro didn’t catch it before release. I’ll continue to use and test both of my new HERO10s and update here if there’s relevant news to report.

After the initial online reports, I would imagine–and hope–that GoPro’s engineers are currently trying to troubleshoot and fix the issue.

The best-case scenario would appear to be that GoPro can fix this quickly with an emergency firmware update (apparently, there was already a firmware update scheduled for mid-November to add features like Max Lens Mod compatibility). Hopefully, there are some tweaks they can make. And the sooner, the better.

But if it’s not something that can be fixed with a firmware update, it’s a much bigger problem–at least, for many in GoPro’s target audience. GoPro has had to do a product recall before–when some Karma drones started falling from the sky. That seems like too-drastic an action for this type of issue, so hopefully, it won’t come to that. But I’m really hoping that GoPro will come out publicly with a clear plan of action. Hopefully, they’ll get out in front of it; otherwise, it’s a poor experience for users. Until then, it’s hard to recommend the HERO10 Black despite everything else it has going for it. At the very least, it’s a rather large asterisk and something that potential customers should be aware of in case it impacts their intended use.

GoPro is apparently working on the understanding that most users are shooting only short videos, and that their focus therefore isn’t on getting longer battery life or longer shooting times. That might be true–and it’s almost certainly true of the clips they see uploaded to the GoPro cloud service (especially when GoPros chapter all their videos)–but it ignores the way that many other users shoot with their cameras. And even a rapid series of shorter clips can overheat the camera.

There are probably workarounds in the meantime. Lower-bitrate video modes most likely cause less heat. But if you’re going to shoot in lower video modes, there’s another very good camera that already does that: it’s called the HERO9 Black.

5 thoughts on “GoPro, We Have a Problem. Does the GoPro HERO10 Black Overheat Too Easily?”