The GoPro HERO10 Black now has a new Extended Battery mode as part of the Video Performance Mode update. Here’s what it does and when to use it. 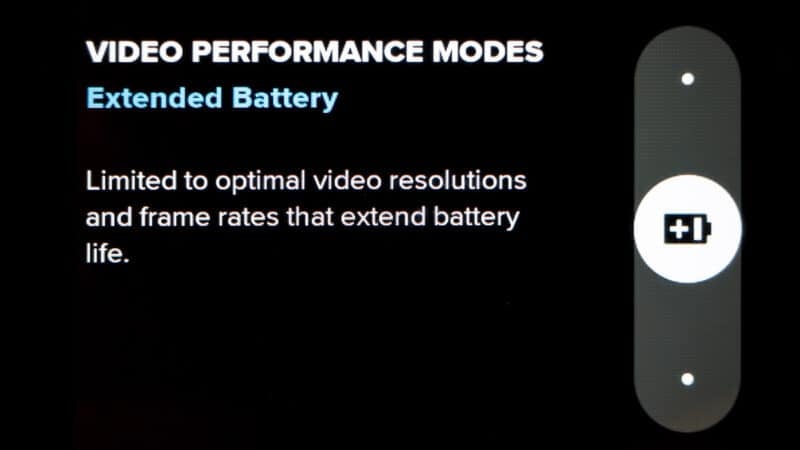 The GoPro HERO10 Black gets hot and goes through the battery quickly. Plenty of users have been vocal in their disappointment in both aspects (including me).

And since the camera’s launch in the fall of 2021, GoPro has tried to address these issues in a two-track way: with hardware and software.

For the software track, GoPro has released a new firmware update. 1 It includes some new Video Performance Modes. To reduce the risk of overheating when shooting in conditions with limited airflow around the camera, there’s a new Video/Stationary Video mode. And to tackle the short battery life, there’s a new Extended Battery mode.

In practice, both the Extended Battery and Tripod/Stationary Video modes offer a limited number of resolution/framerate combinations, lower bitrates, and the disabling of some features.

Lower bitrate video tends to consume less processing power and places less demands (and heat) on the transfer of data from camera to SD card. So by using these rather than the full high-bitrate modes of the Maximum Video Performance category, users should see fewer overheating issues and get longer battery life.

RELATED: I’ve put together a separate guide on how to maximize GoPro HERO10 Battery life.

What is Extended Battery Mode?

The main thing about the Extended Battery mode is that it reduces the video bitrate and offers a pared-down selection of resolution/framerate combinations. So it won’t give you the option of using the most power-hungry settings (you can switch to Maximum Video Performance mode for that).

These are the resolution/framerate combinations that are available on the HERO10 Black when using Extended Battery mode. The numbers denote the video bitrate in Mbps (using HEVC).

How to Turn on Extended Battery Mode

There are two ways to turn on Extended Battery Mode.