The GoPro HERO10 Black now has a Tripod/Stationary Video mode as part of the new Video Performance Modes. Here’s what it does and when to use it. 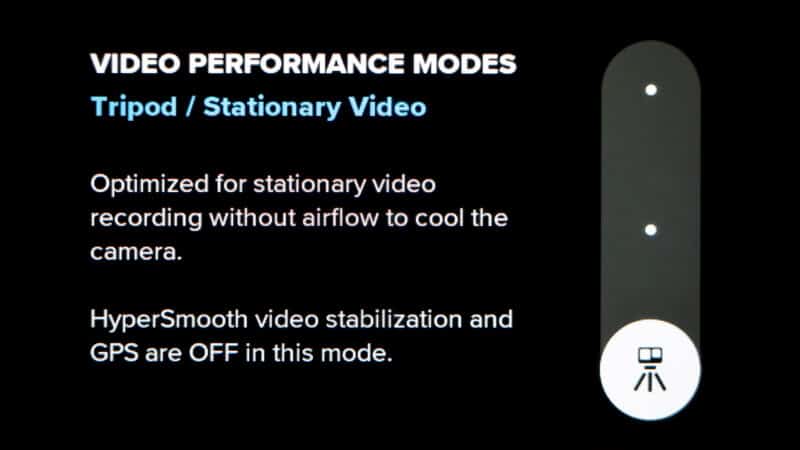 As part of its efforts to tackle widespread user dissatisfaction with the GoPro HERO10 overheating quickly and shutting down when shooting video, GoPro has released new firmware in v.1.16.1

One of the changes with firmware 1.16 is the introduction of new shooting modes for video. There are now these categories for shooting video. They’re known as Video Performance Modes, and they are:

These are now in place of the previous Standard and High bitrate choices.

In practice, the Extended Battery and Tripod/Stationary modes offer a limited number of resolution/framerate combinations, lower bitrates, and the disabling of some features.

Lower bitrate video tends to consume less processing power and is less demanding on the transfer of data from camera to SD card (and therefore generates less heat). So by using these rather than the full high-bitrate modes of the Maximum Video Performance category, users should see fewer overheating issues and get longer battery life. (At least, that’s the idea!)

What is Tripod/Stationary Video Mode?

The main thing about the Tripod/Stationary Video mode has less to do with the camera being physically attached to something than it does that there’s slow or limited airflow around the camera to draw heat away.

It also disables HyperSmooth video stabilization (which should be unnecessary when using a tripod) and disables GPS.

So here’s a rundown of which modes are available when you have the Tripod/Stationary Video mode enabled on the HERO10 Black:

These are the resolution/framerate combinations that are available on the HERO10 Black when using Tripod/Stationary Video mode. The numbers denote the video bitrate in Mbps (using HEVC).

Why Was the Tripod/Stationary Mode Added?

The addition of the Tripod/Stationary mode is related directly to the problem of dissipating the heat from the camera to the surrounding air. It’s known as heatsinking, and it has always been a core issue with digital processors. GoPros use passive heat exchange, and they have a very small surface area to work with. When the camera is still, there’s usually less air flowing past it to draw the heat away.

When the initial overheating issues started coming out, GoPro’s response amounted to: “well, of course, it’s going to overheat if you keep the camera still, because there’s not enough airflow around it to keep it cool.”

And while they have a point, the response also ignored the myriad other ways that many of us use GoPros. Not all of us are snowboarding or surfing or mountain biking. GoPros are good for lots of other things, too.

In keeping with their aspirational marketing campaign, it implied that everyone who uses a GoPro HERO10 should be either surfing or snowboarding down a 12,000 foot peak in subzero temperatures. And with that fast, cold airflow or water flow, you’re much less likely to face overheating issues.

It goes back to the tension within the whole GoPro brand. It was born as an action camera for surfers and snowboarders and mountain bikers. And that’s still where much of their marketing is aimed. But they’ve realized that if they want to grow their company–especially now that they’ve gone public–they need to broaden their appeal. Which explains their more recent adoption of marketing efforts emphasizing the versatility of GoPro cameras and efforts behind adding features so you can use your GoPro as a webcam.

You’ll get lower bitrate recording in this mode, but hopefully, you should run into fewer overheating problems.

It will also disable HyperSmooth. Although, if you’re using a tripod, you probably don’t need stabilization engaged anyway. Disabling it reduces the real-time processing demands.

How to Turn on Tripod/Stationary Video Mode

There are two ways to turn on Tripod/Stationary Video Mode.

The Video Performance Modes were added with firmware v.1.16. If you’re not seeing them, make sure you’ve updated your HERO10’s firmware to at least 1.16 (but definitely skip 1.15!).