Here’s a master list of the bitrates used for the various video modes of the GoPro HERO10 Black. Updated for the new Video Performance Modes. 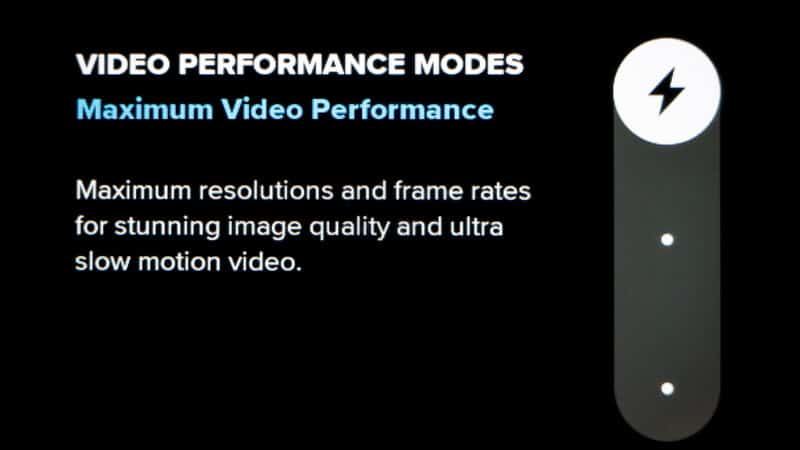 The rollout of the GoPro HERO10 has been, shall we say, a bit bumpy. The biggest issues have been related to overheating and poor battery life. But other issues have frustrated users, such as the delayed rollout of Max Lens Mod compatibility and a botched firmware update (v1.15).

GoPro has released a new firmware version (v1.16) that makes an effort to address the overheating and poor battery performance issues (and fixes the automatic rebooting that 1.15 introduced).

They’ve removed the previous options to choose between Standard and High bitrate when shooting video. Instead, the shooting categories function as bitrate selectors.

I was curious to see how these new video categories worked with video bitrate. As I expected, they actually relate to lowering the bitrate. By doing that, it means less processing for the GP2 chip and less data being written to the memory card. Both of those things will help reduce the heat that’s naturally generated as overhead. 1 The Tripod/Stationary Video mode also disables HyperSmooth and GPS.

So it’s a logical way to help users have fewer issues with overheating, although it falls more into the category of a workaround than a solution. It doesn’t actually solve the efficiency and physics issues related to the heavy in-camera processing and power demands of the GP2 chip, writing large, sustained streams of data to flash memory, and a small physical package with few heatsinking opportunities.

So here’s the master list of video bitrates used for each combination. For now, this refers only to HEVC video. H.264 compression is still available in some video mode combinations on the HERO10 Black, but I haven’t yet added those here. These bitrates were taken from real-world tests using a GoPro HERO10 Black running firmware v.1.16. 2

How to Switch Video Performance Modes

There are two ways to switch between the new Video Performance Modes.

Another firmware update is expected in mid-December 2021 to include Max Lens Mod compatibility. It will also include some new resolution/framerate combinations, and tweaks to which modes SuperView is available in. That firmware is currently in beta, but you can download and manually install it prior to the official release.

GoPro has posted a bitrate chart, but at the time of writing it still refers to the pre-1.16 way and is outdated (i.e., there are no Video Performance Modes and a choice between High and Standard bitrates).