Burst mode on the GoPro HERO11 Black takes a rapid sequence of photos, which is especially useful for getting the shot you want when capturing fast action. Here’s how it works. 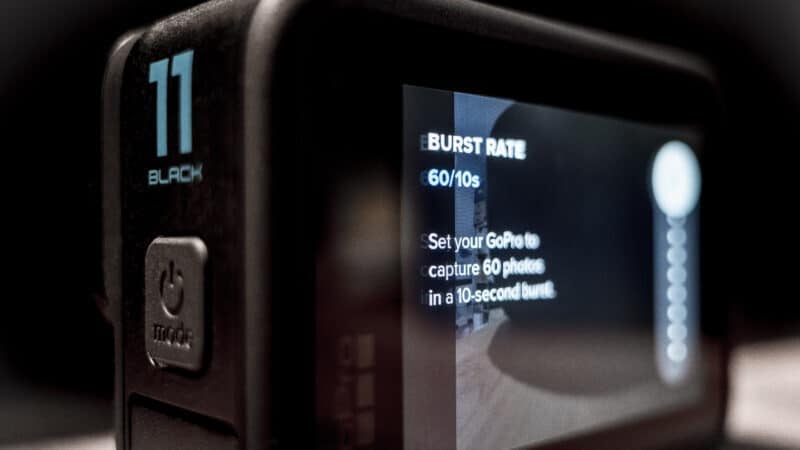 Like most other GoPros, the HERO11 Black includes Burst Mode photos. This allows you to shoot rapid sequences of still images.

It can be useful in several ways. You might be putting together a string of photos together to show a skateboard jump or baseball swing or whale breaching.

The way I use it most often is to maximize the chances of catching the photo I want with fast, short action.

On the minus side, you end up with a bunch of photos to sort through and discard. On the plus side, there’s a much greater chance of getting the shot you want.

The HERO11 Black also has an improved feature for grabbing 24.7-megapixel still frames from video. That’s another good option for accomplishing similar results, especially since the HERO11 doesn’t have LiveBurst.

While there’s a lot of overlap on what burst mode rates are available on different GoPro models, they’re not all exactly the same. And that’s true here, where the options have been tweaked between the HERO10 and HERO11.

Here are the rates that are available on the HERO11:

That last one—Auto—works a bit differently from the others and deserves its own explanation. It captures up to 30 photos in a second. 1

With the other settings, you get that many photos in that amount of time no matter what, even if that means that some images will be underexposed.

But if you don’t specifically need that rigid number of shots, the Auto setting is a great option to maximize the chances of getting correctly exposed images while still shooting burst.

I have put together separate a more detailed explanation of how the auto setting works.

If you’re familiar with shooting in burst mode on other GoPro cameras, the way it works on the HERO10 will be pretty straightforward. But there are still some things worth knowing.

On some older models, Burst Mode only worked with JPG output. But on the HERO11, both RAW and JPG is available as an output format for Burst Mode.

There’s a choice of two lenses when using Burst Mode:

The Wide is the standard GoPro field of view (although the HERO11 comes with SuperView set as default in other shooting modes).

The Linear field of view minimizes the fisheye lens distortion through digital manipulation; it’s not a true optical lens change.

The HERO11 doesn’t have LiveBurst.

But it does have an improved feature for grabbing still 24.7-megapixel frames from video, which is another good option to accomplish similar ends.

The HERO11 does not have Continuous Photo.

Several previous models of GoPro cameras have had a related feature called Continuous Photo. The gist is that rather than a preset number of images over a specific duration, you control the duration by holding down the shutter button. But it’s a moot point on the HERO11–it doesn’t have that feature.

The HERO11 includes some enhanced photo features such as SuperPhoto and HDR. These are not compatible with Burst Mode.

These features use in-camera post-processing to achieve their effects, and it’s not practical for the camera to apply that processing to all images in a burst sequence.

You can set the zoom and field of view (or lens) with Burst Mode, but only if you have the output set to standard (i.e., you can’t use those with RAW files in any shooting mode).

The downside of shooting in burst mode is that you end up with a lot of photos to sort through. The methods for doing it aren’t specific to the HERO11, but here are some good options.

On-camera playback. You can view and delete photo sequences on the camera’s back screen using the usual playback functionality. So it’s convenient to have it right there. The downside is that it’s only a small screen, and it can be tedious to sort through large numbers of images on it.

GoPro Quik mobile app. The mobile app provides a somewhat more convenient method of sorting through large numbers of images. The screen is a little bigger, and most of us are better at controlling a smartphone screen quickly than the GoPro touchscreen.

Computer Software. There are many good options for sorting large numbers of images using a computer. It does mean the extra step of downloading the images to your computer. But you get a much larger screen to really see the images, quick controls using a keyboard and mouse or touchpad, and built-in tools for selecting and batch editing large numbers of images at once.