How to Lock Orientation on the GoPro HERO11 Black

By default, the GoPro HERO11 Black will automatically adjust the orientation when you rotate the camera. But you can lock and fine-tune that behavior. Here’s how it works. 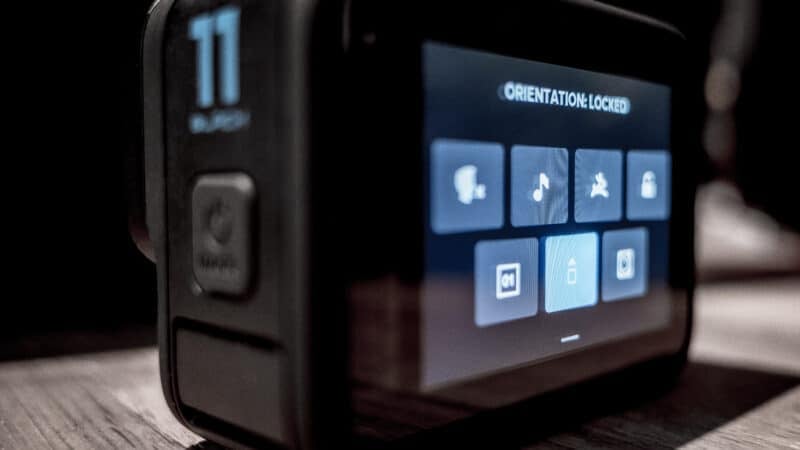 The GoPro HERO11 Black includes sensors that can detect the rotation of the camera. Just like your phone, it can adjust the screen rotation depending on whether you’re holding it vertically or horizontally. You can even have the camera mounted upside down–it’s surprising how often that can be useful–and it will automatically rotate the image/video and screen so that it’s right-side up.

That’s a convenience feature, and it’s enabled by default. But there are also times that it can be an inconvenience.

So here’s how to lock it in place to prevent automatic rotation and fine-tune its behavior.

How to Lock Rotation on the GoPro HERO11 Black

Automatic rotation is enabled by default on the HERO11. If you rotate the camera, the screen and filming orientation will rotate to stay right-side up.

Locking the orientation is quick and simple, but there are some things worth knowing about how it works.

For the most basic use:

Locked looks something like this, with an arrow indicating the orientation:

To disable the lock, simply tap that same icon again.

But something worth noting is that the precise behavior of this feature is also determined by the settings described in the next section.

Enabling Landscape Lock on the HERO11

You can also tackle things in a slightly different way with slightly different results. It’s by using the Landscape Orientation Lock. It’s mostly straightforward to how it works, but there is still a neat feature that’s worth knowing about.

By default, the HERO11 does not restrict the orientation. That corresponds to an “All” setting here. But if you only want it shooting in horizontal (landscape) orientation, you can limit it entirely to that.

But it’s important to note that while it will limit it only to landscape orientation, you can still rotate the camera upside down, and it will automatically adjust for the menus and video footage to be right-way-up.

Put another way, the Landscape Orientation Lock by itself will prevent 90° rotations but will still allow 180° rotations.

When Automatic Rotation Detection Can be Inconvenient

In general, automatic rotation is convenient to have when shooting photos or playing back on the screen. Being able to shoot vertically is a feature that’s very useful in some circumstances. If you’re shooting for TikTok or Instagram, vertical videos make best use of the available screen real estate.

But if you’re shooting for an outlet that uses a more traditional horizontal (landscape) orientation, vertical video is a pain. You can rotate it in post-production, but that’s a hassle and probably going to lead to framing compromises and cropping.

Overall, it’s not a major problem, because rotation is pretty easy to fix in post. It’s very easy with still images, and still quite easy with video.

Most video editing apps include the ability to rotate footage by 90 or 180 degrees. You can also do it in apps like Youtube (under the Enhancement features). And once you do that you won’t notice any difference–the resolution and framerate all remain the same. But it’s not always convenient to do that, especially if you’re trying to browse through multiple clips. And it adds yet another thing you have to do to fix it.

So I’d rather avoid it and get the orientation correct when shooting. That’s easy when shooting with a cell phone–it’ll be pretty obvious by the way you’re holding it. But I find it crops up more often when shooting with GoPros, mainly because of the way one tends to shoot with GoPros. Their strength is shooting on the move, and there are all sorts of different ways to mount and hold the camera.

The problem is exacerbated by the lag you can sometimes get with the camera being slow to register the orientation. We’re only talking a couple of seconds, but it’s still slower than I’d like. The reason that can be a problem is that you can end up with footage recorded at a different rotation than what you want—something that’s happened to me more than once.

So I prefer to lock the orientation and avoid this issue completely.

The rotation information is also embedded into the photo and video files’ metadata, telling the playback app which way to play the video or which way to display the photo. So when you go to play back the video, it might play upside down (i.e. rotation of 180°) or vertically (portrait orientation, or rotation of 90° or 270°), depending on how you filmed it.

When interacting with some menu sections, you’ll need the camera to be in landscape orientation.

Yes. If you’re using the GoPro HERO11 Black for filming video clips for social media sites like TikTok or Instagram Reels, you can set it to film vertically (i.e. in portrait orientation). The HERO11 has a new sensor with an aspect ratio of 8:7, which works well for sharing on social media sites at 16:9 (or another aspect ratio) with less cropping.

By default, the HERO11 will automatically rotate the recording orientation with the camera (before you start recording). You can also lock the orientation in vertical.

How to Lock Orientation on the GoPro HERO11 Black