Is the GoPro HERO11 Black Waterproof?

The GoPro HERO11 Black is waterproof out of the box without a separate waterproof housing or case. But there are still limits to how waterproof it is, and there are also ways to make it even more waterproof. 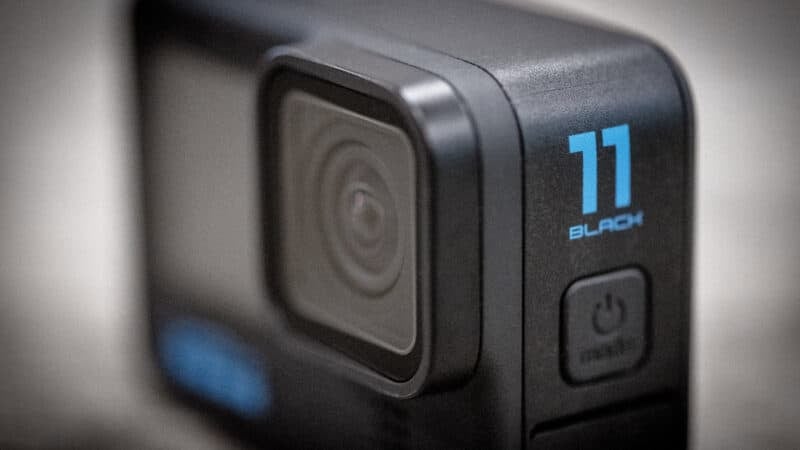 Yes, the GoPro HERO11 Black is waterproof without the need for a separate waterproof housing or case.

The GoPro HERO11 Black is Waterproof Without a Case

This is something that comes up often, because older GoPros needed a separate clear plastic housing to add waterproof protection. So if you’ve used an older GoPro and skipped some of the more recent models, it’s a pretty major design change (and mostly for the better).

Since the HERO5 (or, more accurately, the Session), GoPro cameras have switched to having the camera body itself being waterproof. So for many situations in and around water, you no longer need to have a separate waterproof housing, as you did for the HERO4 models and earlier. The GoPro HERO11 continues that approach.

The GoPro HERO11 Black is waterproof right out of the box. By itself, it’s rated for full submersion underwater to a depth of 33 feet / 10 meters.

If you need to take the camera deeper than that, or just want extra protection, you can add a protective housing (I have more details on that below).

How to Increase the Waterproof Protection of a GoPro HERO11 Black

The HERO11 Black is rated to a depth of 10 meters, or 33 feet. That’s good for many uses: swimming, snorkeling, rain, waterfalls, paddleboarding, and so on.

But what if you want to take it deeper than that? In most cases, that means SCUBA diving. That’s where a Protective Housing comes in useful.

The Protective Housing is rated down to 60 meters, or 196 feet. That’s well below the depth of standard recreational SCUBA diving. 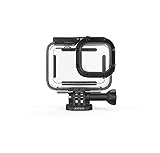 It’s also a useful accessory above the water. It adds quite a lot of protection to your GoPro from dust, mud, and grime, and if it gets cracked from a knock, it’s much cheaper and easier to replace just the housing rather than the whole camera.

Waterproof protection is only as good as the weakest seal. So it’s always a good idea to ensure that the camera’s side door is properly locked in place and that its rubber seals are intact and don’t have any grit or sand that could create a gap for water to get in. And make sure that the lens cover is locked in place. That’s really only an issue if you’ve removed or replaced the lens—I’ve never seen the lens coming loose by itself so long as it’s properly attached.

For the camera to be waterproof, the side door needs to be fully attached and closed. The HERO11 is only waterproof when using its internal battery and without the Media Mod. Anything that requires access to the USB-C port–such as an external battery, an external monitor, an external microphone, or the Media Mod–means opening the side door to access the USB-C port and therefore leaving it exposed. GoPro does sell a USB Pass-Through Door that allows external access to the USB port, but it’s weather-resistant rather than fully waterproof, so it’s suitable for things like rain, spray, or occasional splashes, but it’s not suitable for submersion. The same goes for most third-party external power kits (some are rated as water-resistant or weather-resistant).

I have some more detailed recommendations on using GoPros around water here.

Touchscreens don’t work underwater, but you can still use it as a viewing screen.

GoPro cameras don’t float. There are several ways to tackle this problem–I cover some of the best options in a separate post: How to Make a GoPro Float.

Neither GPS nor Wifi work underwater. Those are not shortcomings of the HERO11–they’re limitations on the GPS and Wifi signals.

Is the GoPro HERO11 waterproof?

Yes, the GoPro HERO11 Black is waterproof without the need for a separate waterproof case or housing. By itself, the camera is rated for 33 feet / 10 meters. So you can comfortably take it swimming, surfing, snorkeling, or paddle boarding.

If you’re SCUBA diving deeper than that, you can buy a Protective Housing to make it even more waterproof (down to a depth of 60 meters / 196 feet).

Does the GoPro HERO11 need a waterproof case?

The GoPro HERO11 Black is waterproof without needing a waterproof case or housing. By itself, the camera is rated for 33 feet / 10 meters. You can add a Protective Housing to make it even more waterproof.

How deep underwater can the GoPro HERO11 go?

The GoPro HERO11 Black is rated for full submersion to a depth of 33 feet / 10 meters without an external waterproof housing.

By adding an external waterproof housing, you can take your GoPro deeper. The official housing for the GoPro HERO11 Black, the GoPro Protective Housing (model number ADDIV-001), is rated to a depth of 196 feet / 60 meters. Aftermarket housings might be rated for different depths and be subjected to different quality control protocols.

Images and product information from Amazon PA-API were last updated on 2023-02-02 at 18:59. Product prices and availability are accurate as of the date/time indicated and are subject to change. Any price and availability information displayed on Amazon Site at the time of purchase will apply to the purchase of this product.

Is the GoPro HERO11 Black Waterproof?