Here are some of the best options for replacement and extra batteries for the GoPro HERO3 and HERO3+ Black, along with chargers. 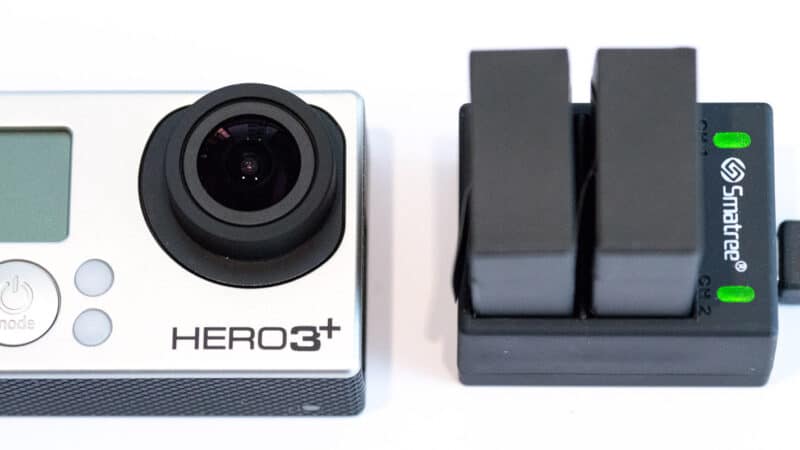 There’s a lot to like about the GoPro cameras. Being small and light has its upsides in being able to put them in places other cameras can’t easily go. But it also has its downside: the battery life of the GoPro HERO3 cameras isn’t what you’d call great. Depending on the settings you use, how fully it’s charged, and how cold it is, you might get up to two hours of filming in before the battery dies, if you’re lucky. More likely, you’ll find yourself getting significantly less than that.

So whether you’re looking to extend your shooting time by having spare batteries on hand or looking for a replacement battery for your HERO3 or HERO3+, there are several options available. Here’s a rundown.

First, though, these are the specifications of the current HERO3/3+ battery.

Note that GoPro had an earlier model for these cameras that was rated for a lower capacity (1050mAH).

GoPro makes their own branded version of the battery, which you can pick up individually. It’s compatible with the GoPro HERO3 and HERO3+ cameras.

It’s a 1180mAh lithium-ion polymer battery with model number AHDBT-302, 1 and it’s a battery specifically used in the HERO3 and HERO3+ models (but note that it’s a dedicated battery for the HERO3, and it’s not interchangeable with other models).

You do tend to pay a little more for the manufacturer-branded batteries, but they come with the peace of mind of knowing that they’ll be compatible with the camera and will remain so. GoPro has pushed out firmware before that deactivates batteries from other manufacturers.

It’s a standalone battery that doesn’t come with a charger. GoPro doesn’t make them available through their own store anymore, and they’re hard to find in stores.

You can also find replacement batteries for the HERO3 cameras that are made by other manufacturers. Many of these are very good batteries, and they’re often excellent value. I’ve used many third-party batteries over the years without any issues. But it’s worth knowing that it is within GoPro’s capabilities to push out a firmware update for the camera that will disable batteries from third-party manufacturers. And they’ve done it before. For now, everyone seems to be playing nicely, but there is always some risk of that with these alternative-brand batteries.

Here are some of the ones I’ve used and been happy with.

Both the kits below include two spare batteries, they’re made in Japan, and they have very similar power specs as the original GoPro batteries. Both kits include an AC charger and a DC car charger. And both are relatively inexpensive.

But there are other differences between these kits that might make the difference for you.

Wasabi have been around for a while now, and having used quite a few of their camera batteries and chargers, I’ve found their products to be of good quality and cost-effective.

This charger and batteries that are compatible with the HERO3 come with two batteries, an external dock charger, and AC and car charger connections. It’s worth noting, though, that this won’t charger via USB. 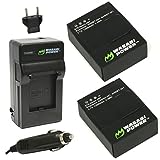 The key difference between this and the one below is in the AC charger. The charger in this kit charges one battery at a time. [UPDATE: Since this was originally posted, Wasabi have released their own dual charger that’s basically identical to the Smatree model.]

What’s in the box:

Smatree is another after-market brand that I’ve had good experiences with their batteries and chargers.

In addition to charging two batteries at once, this AC charger adds flexibility. It separates out the part that plugs into the wall from the battery cradle. That means that the part that plugs into the wall can be a dual USB charger, so you can also charge your phone or tablet or whatever else you want to charge by USB. It also means that you don’t have to use this as an AC charger–you can also connect it to a USB power source. 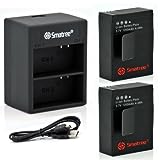 The battery cradle itself is much smaller than in the Wasabi model above. And the cradle can be attached by USB cable to your computer or DC adapter to charge.

What’s in the box:

I have both of these kits and have found them all to work as advertised. I’ve not found any functional difference in the batteries–they all seem to perform just as well as the GoPro-branded ones, despite some minor variation in the rated capacities.

But I prefer the dual charger versions for several reasons: they charge two batteries at once (obviously), they’re smaller, they’re more flexible in your power source, and you’re getting a dual AC and DC USB chargers.

What kind of battery life can you expect from a GoPro HERO3 battery?

These are the estimates that GoPro themselves put out. It’s worth noting that the battery life you get in real-world shooting can be influenced by a number of different factors, including the settings you’re using on the camera and even the environmental temperature. Lithium batteries have a fairly narrow working range when they’re working well, and they perform poorly in very cold or very warm conditions. Using features like WiFi will also deplete the charge more quickly. And lithium batteries will degrade over time with use, in which case it’s time to pick up a replacement battery.

How to Charge GoPro HERO3 and HERO3+

The simplest way to charge the GoPro HERO3 and HERO3+ cameras is to use the micro-USB cable that came with it to connect the camera to a power source. You can use a USB wall adapter, a USB external power brick, a USB car charger, or a computer. That will charge the battery in the camera.

If you want to charge the battery separately from the camera, you have some options. The HERO3 and HERO3+ cameras don’t come with a separate battery charger, but you can pick them up separately.

GoPro makes their own dual-battery version that conveniently lets you charge two batteries at once via a USB power source (note that the charger doesn’t come with batteries, despite how the product photos make it appear). There are also alternative versions made by other manufacturers, such as those listed above. Some are multi-battery charger cradles, some can charge via USB, while others only work with AC or car adapters. 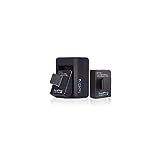 Images and product information from Amazon PA-API were last updated on 2023-02-02 at 12:48. Product prices and availability are accurate as of the date/time indicated and are subject to change. Any price and availability information displayed on Amazon Site at the time of purchase will apply to the purchase of this product.