GoPro cameras are best known for video. But they’re also very capable at taking photos. Here are some real-world examples I’ve taken with the HERO4 Silver. 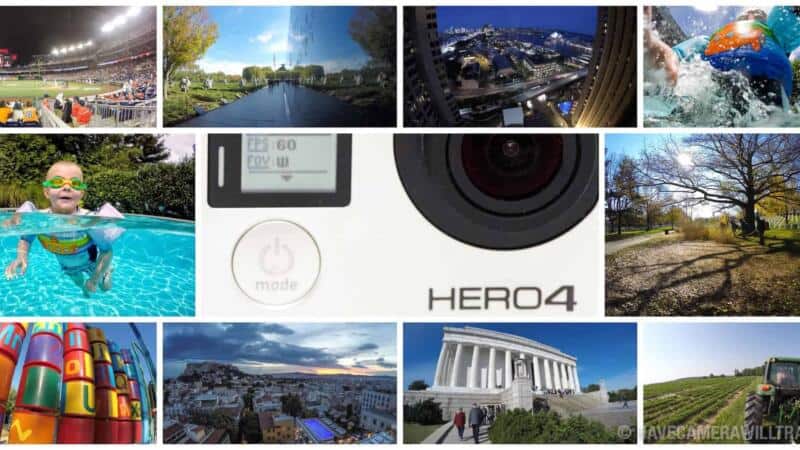 GoPro cameras are best known for video. But they’re also very capable cameras for taking pictures. They have small sensors, and they don’t give you as much manual control as some other compact cameras, and their wide-angle lens isn’t a good fit for every scene, but you can get some fun and unique shots with a GoPro that would very hard, or even impossible, to get with a “normal” camera.

I’ve put together below a collection of pictures I’ve taken with the GoPro HERO4 Silver that give some sense of what its photos look like.

The HERO4 Silver has a small 1/2.3-inch sensor that produces up to 12MP images at 4000 x 3000 pixels. It was also the first GoPro to have a built-in screen on the back, and that live view makes it much easier to compose the shot. And it comes with a waterproof housing as standard, so you can put them in places that most cameras can’t go.

The settings for each picture are included in the caption below it, although you only have fairly limited control over the exposure settings. The aperture is a constant f/2.8, which the camera automatically adjusts the ISO and shutter speed. The rest is mostly automatic exposure, although you can apply exposure compensation from -2.0 stops to +2.0 stops. You can also set the minimum and maximum ISO settings to have some influence over the automatic exposure (from 100 to 800 ISO). Starting with the HERO5 Black, some GoPros can now shoot in RAW. But that’s not an option with the HERO4 Silver–only JPGs.

The newer HERO5 Black has the same kind of sensor. Despite a few tweaks in the processing engine, its photo quality is very similar. It does, however, have quite a lot more control over the exposure settings through its Protune features, so if you’re after more control over the exposure, you’ll be better off looking at one of the newer Black models.

You can click on each image to open a higher resolution version.

Wrap Up: Taking Photos with a GoPro HERO 4 Silver

The HERO 4 Silver is an older model now and has been superseded by several generations of newer cameras, but if you’ve picked up one used or gotten your hands on one from a friend, it’s quite a capable still camera for taking pictures. Hopefully the photos above are useful for some sense of what its photos look like.

1 thought on “Photos Taken with a GoPro HERO4 Silver”