Here’s a rundown of the video resolutions, framerates, fields of view, and Protune options available when shooting video on the GoPro HERO4 Silver. 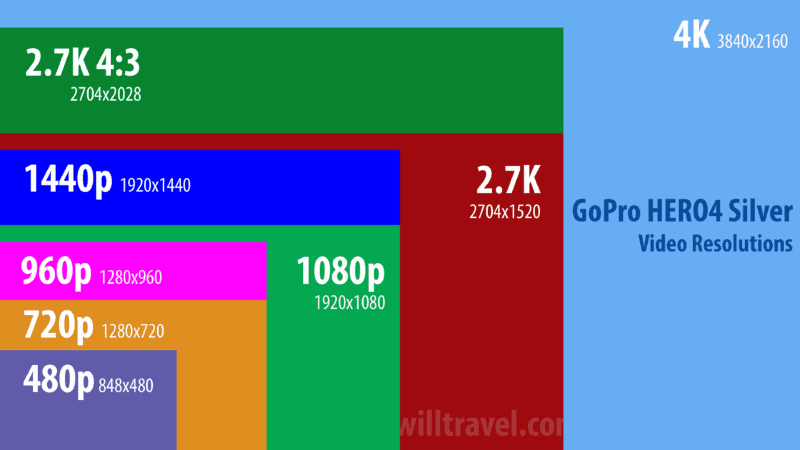 The GoPro HERO4 Silver is the middle camera in the HERO4 range. The Black is designed as the flagship model and has the most powerful video capabilities. The Silver is not quite as full-featured, although it still boasts some impressive features.

The Silver can shoot 4K video, but it maxes out at the 15fps framerate (a standard video framerate for smooth motion is typically within the 24 to 60 fps range). For slow-motion video, it can shoot 720p120 or 480p240. You can find the full list of the available video modes below.

These are the video resolutions available on the HERO4 Silver and how they compare to each other.

Here’s the full list of resolutions and framerates available on the HERO4 Silver.

There are three main fields of view, or FOV, and two extra ones. The default is known as Ultra Wide (basically the same as the Wide setting in later models). It’s that distinctive fisheye look we’re used to from GoPro footage. It’s great for that immersive feel, but you have to get in close.

You can also choose Medium and Narrow, but these are only available at a few resolutions. They’re essentially digital zooms, not true optical zooms.

There’s a special SuperView FOV that’s available with some 1080p and 720p framerates. It’s an even wider view that crams in more vertical content and stretches it to fit the 16:9 aspect ratio. So it looks more natural but also can be more immersive for close POV shots.

Finally, there’s also the new Linear FOV. This FOV is designed to correct for the extreme distortion that the fisheye lens adds. You can see some examples here. It’s especially useful if you’re shooting aerial footage from a drone, and that’s why it was added to the camera as an update–to make it compatible with the Karma drone that was being released around that time.

The Linear FOV wasn’t available on the camera when it was released (and you won’t find it mentioned in the product manual), but it was added with a firmware update (v05.00). So if you don’t see it as an option on your camera, make sure that your firmware is up to date (you can find the firmware and instructions here).

This setting doesn’t increase the sensor’s sensitivity to light–it drops the video framerate lower if necessary to accommodate a lower shutter speed, thus allowing more light in for each frame.

It doesn’t work at all framerates–specifically, the 240fps or 30fps or slower.

Here are the Protune options for the video mode on the HERO4 Silver.

Manual. You find the GoPro HERO4 Silver manual on GoPro’s website here. It’s worth noting that it hasn’t been updated with firmware (v05.00) and doesn’t include the new Linear FOV.