While there are several areas of overlap comparing the HERO4 Silver with the Session, there are also some key differences. Here’s a detailed breakdown of how they compare in terms of features, capabilities, and performance. 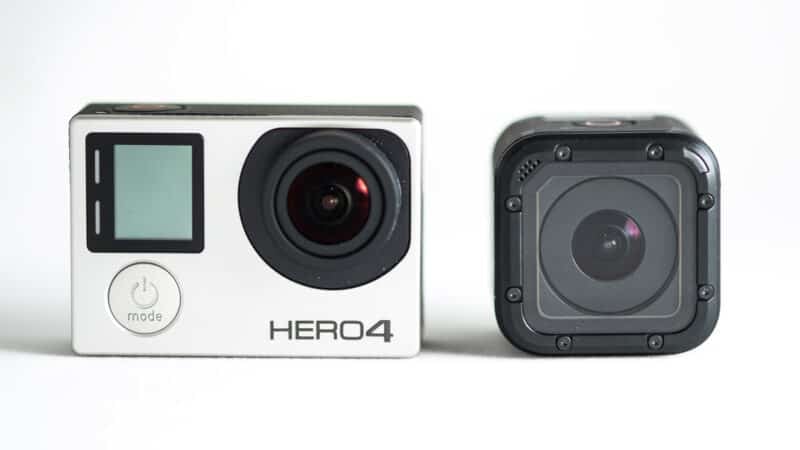 GoPro has added a new model to its current series of cameras: the GoPro HERO4 Session. It’s a tiny almost-cube that packs in the capability to produce HD video, still photos, and timelapse with the same kind of go-anywhere attach-to-anything mindset of the other GoPros.

It also comes with the same recommended retail price as the GoPro HERO4 Silver: $399.99. There are a lot of ways they overlap, but there are also some key ways they’re different. So if you’re wondering which is a better fit for what you’re after, here’s a breakdown of the main points of difference and similarities.

But let’s cut to the chase: the Silver is a better camera. It produces better-quality video and photos, has many more options for controlling the settings, comes with a built-in LCD screen, has a removable battery, comes with a more rugged housing, and is, mostly, easier to use.

It’s because it’s not quite an apples-to-apples comparison. It’s more like a Granny Smith vs Red Delicious. They are conceptually the same, but there are some important differences that will make one a better fit for some users than another.

The headline feature of the Session is its size. The other GoPros aren’t exactly large, but the Session is much smaller again. That means it can fit in places that the other GoPros can’t. It means it makes less drag in high speed or high wind situations. There’s less leverage to risk movement. And it’s lighter for uses like drones where weight is critical.

In these shots, you can see the Session side-by-side with the Session.

These measurements are without the housing.

One of the key attractions of GoPros, of course, is that they can go in places that cameras shouldn’t be able to go. With rugged, waterproof housings they’re not especially bothered by water, dirt, or even bumps.

But these two cameras tackle the durability issue quite differently. The Silver can be used without any housing, in which case it’s vulnerable to the elements. To make it waterproof you put it in a waterproof housing, which comes standard in most configurations. It’s rated to remain waterproof down to a depth of 131 feet (or 40 meters).

The Session doesn’t use a separate waterproof case–the camera itself is built to be durable. The frame that it comes with is for mounting–it offers minimal protection against bumps but doesn’t add any extra protection against water. The camera is rated to be waterproof down to 33 feet (10m), which is a lot less than the standard GoPro housing with the Silver but still plenty for things like surfing, swimming, or snorkeling. If you’re planning to do Scuba diving, it’s borderline and you’re probably much better off going with the Silver.

I also have some concerns about the fragility of the Session’s trap door that protects the memory card slot and USB socket, which seems to me to be a weak link. That door is pretty flimsy, and it’s essential to maintain the waterproof seal. So if the door breaks off, the camera isn’t waterproof anymore. Here’s what it looks like:

Both cameras have Bluetooth and Wifi connectivity, and you can control both with the GoPro mobile app or the GoPro Smart Remote.

With the Silver, you can also change settings, modes, and other controls using the on-camera buttons as well as the LCD screen on the back.

The Session does have two buttons (and no screen), but they’re very limited in what they can do. The biggest issue is that you can’t change things like the shooting mode or video resolution or most of the other settings without using either the mobile app or the Smart Remote. (Please note that it does not come with the Smart Remote–that’s sold separately.) That adds extra hassle if you find yourself needing to change shooting modes regularly.

The Silver has better video quality than the Session. It also has many more video modes, can do significantly higher-resolution video modes up to 4K, and gives you much more control over exposure settings.

Both have Protune for video.

Here are the respective video modes.

And here’s a visualization of the various video resolutions that GoPros can produce (not all cameras produce all resolutions).

Both cameras can produce time-lapse photos, where it shoots a series of photos at a regular interval that you can then download to your computer and use software to compile into a video.

The Silver also has a time-lapse video mode, in which it shoots a series of images at regular intervals and then compiles the video in the camera itself. It’s a much more convenient way to do it, although you do give up some flexibility compared with doing it the more manual way.

The Silver also has what it calls a NightLapse mode, which uses long-exposure settings that better suits low-light shooting such as the night sky or city lights.

The Silver has a built-in microphone and you can add external microphones.

The Session has two built-in microphones–one on the front and another on the back. The camera switches between them when it judges that the effects of wind noise are getting too severe on the front mic.

With the Silver, you can remove the battery, which means you can have fully-charged spare batteries on hand and charge the battery in a separate charger.

The battery in the Session is built-in and can’t be removed. That means that the only way to charge it is by plugging the camera into a power source.

Both cameras use the standard GoPro mounting system, so pretty much any existing GoPro mount will work with either camera.

There are differences when it comes to things concerning the housing, simply because the housings and frames are very different. That includes things like floaty housings, etc.

With the Silver, you can use spare batteries, but with the Session, the battery isn’t removable.

External microphones won’t work with the Session, but many will work with the Silver. See this post for a more detailed explanation and recommendations.

Both take microSD cards, both SDHC and SDXC up to 64GB. Because the Silver is more demanding in its high-end video modes, it requires a faster card than you can get away with when using the Session. (Here’s a breakdown of recommended memory cards for the Silver.)

There’s no suspense here: the Silver is the better camera. And, in my opinion, the Session is overpriced.

But there are things about the Session that its bigger siblings can’t match, and that’s really where it’s marketed. If size and weight are crucial parts of your decision, the Session is worth a look. If you’re after something for more general shooting, you’re probably better off with one of the other cameras in the lineup like the Silver, HERO+ LCD, or Black.