A headline feature of the new GoPro HERO5 Black and HERO5 Session is the addition of built-in video stabilization. So I’ve put it to the test. Here are the results. 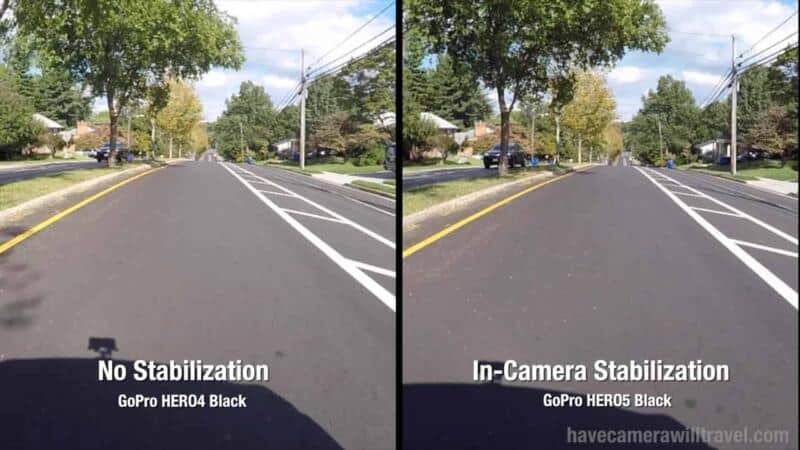 A headline feature on the GoPro HERO5 Black and HERO5 Session cameras is in-camera video stabilization. It’s designed to smooth out the vibrations and jerkiness you get when you’re filming on the move without a gimbal.

These are by no means the first cameras to have built-in stabilization. The leading smartphones like the iPhones have had it for a long time, as some other action cams also have it; the Sony FDR-X3000, for instance, uses optical stabilization where the lens moves to compensate for vibration, which is a different way of tackling it.

In both the GoPro HERO5 models, the onboard stabilization takes a software approach. With these, algorithms go to work to smooth out the footage as it’s being recorded. A common side-effect of doing it this way is that if it’s not done well it can end up looking it was shot through jello. On both of these models (unlike some later models), you can disable the in-camera stabilization if you like, so you’re not stuck with it if you don’t want it. But there aren’t any options for choosing the aggressiveness of the correction or the type–it’s either on or off.

GoPro is also launching a standalone gimbal as part of its Karma drone package (the gimbal will also be sold separately, without the drone). It’s likely to be far more effective at smoothing out footage because it works quite differently, by reducing the movement before it gets to the camera. But it also adds significantly to the cost, whereas the built-in software stabilization is included as a standard feature in both of the HERO5 cameras.

Examples of the GoPro HERO5 Stabilization

I’ve been curious to see how well the stabilization works. But I found that shooting in isolation with one camera made it hard to assess how effective it was. So I decided to rig up a couple of cameras side-by-side to get a direct comparison.

The cameras are on the same dual side-by-side mount, so they’re subjected to the same movement and vibration. The settings are identical in both cameras except for the stabilization feature being enabled or not. They were shot at 1080p60.

This is the most dramatic improvement in the experiments I’ve done so far. Even on a relatively smooth, paved road, cycling can add a lot of vibration. But despite the speed and pervasiveness of the vibration, a lot of it often involves relatively little, albeit constant, movement. That’s easier for software algorithms to profile and counteract.

In this example, the onboard stabilization really comes into its own. There are still bumps and some jitter, of course, but there’s a very obvious improvement, with the stabilized footage being much more usable. 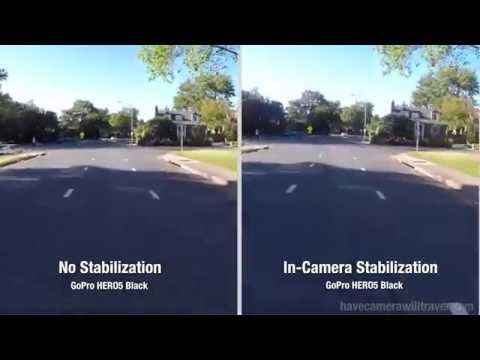 I should mention that the cameras were mounted on the bike’s handlebars for this one, not on my helmet, which is another popular way to capture cycling footage.

At least on a paved road, a car’s heft, tires, and suspension system do a pretty good job of reducing the kinds of constant vibration you get on a bike. So even without the stabilization turned on you can end up with pretty smooth footage (unpaved roads can be a very different matter, of course).

The improvement is less obvious in this one, but it is there. 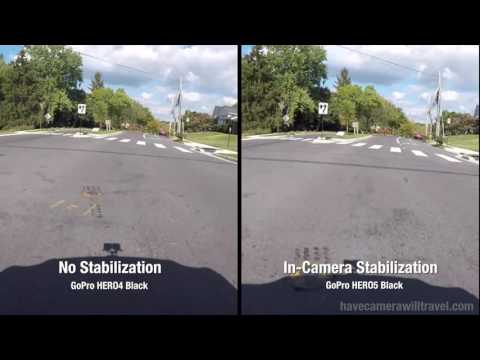 It can be very difficult to smooth out the movement in handheld footage because it’s not just vibration that can be the problem–it also moves the camera up and down, side-to-side, and potentially introduces a bit of swinging panning.

Not surprisingly, the resulting footage in this one is still pretty bouncy, although it is better. 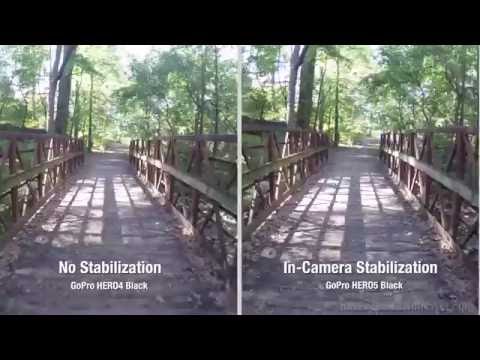 Which Video Modes is Stabilization Available In?

Stabilization is not available as an option in all of the video modes in the HERO5.

Most notably, it’s not available in 4K footage or some of the highest FPS options.

The software works by cannibalizing the areas just outside the visible frame as necessary (I have a more detailed explanation of it here). For that reason, it crops the usual Wide FOV by 10 percent.

You can turn video stabilization on or off, but it’s not reversible later. So, for example, you can’t film with stabilization on and then decide that it has introduced some unwanted effects and that you’d prefer to use a high-end stabilization plugin in Final Cut Pro X or Adobe Premiere later.

If you plan to use stabilization options in Final Cut Pro X, Adobe Premiere, or some other video editing app, you’ll often be better off filming without the onboard stabilization. The original vibration and movement is often actually easier for those plugins and functions to profile than adjusted, post-stabilized footage.

RELATED: See how the HERO5’s video stabilization compares with that of the HERO6.

I’ve been pleasantly surprised by how effective the HERO5s’ built-in stabilization is, and in some cases, the improvement is quite dramatic. It’s certainly not perfect–there’s still a bit of the jello effect at times, and it works better on some footage than others, but it’s not bad.

The Karma’s 3-axis gimbal will undoubtedly offer much better performance again, but even if you buy it as a standalone gimbal, without the drone, it adds a considerable expense of at least a few hundred dollars.

The good news is that even without that gimbal the new HERO5s offer much smoother footage out of the box.

Images and product information from Amazon PA-API were last updated on 2022-06-29 at 13:48. Product prices and availability are accurate as of the date/time indicated and are subject to change. Any price and availability information displayed on Amazon Site at the time of purchase will apply to the purchase of this product.