If you’re looking to control your GoPro HERO6 Black with the Smart Remote or Remo, here are some step-by-step guides to pairing the remotes with the camera. 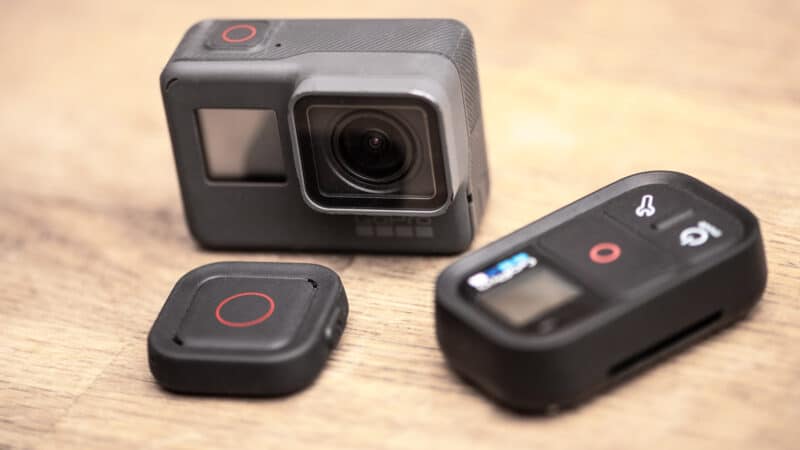 One of the most useful features of GoPros is that you can trigger them remotely. For a camera that’s designed to go in places most other cameras can’t, that’s a big plus, and it opens up all sorts of interesting possibilities.

So there are plenty of times when there’s likely to be some distance between you and the camera, when you don’t want to be messing with the buttons and settings using the camera’s own buttons and menu.

There are a few different options for controlling a GoPro remotely. With the more recent GoPros, you can, of course, use the GoPro mobile app to control the camera, change the settings, and view the photos and videos on the memory card. And a big plus is that it also gives you a live view of what the camera is seeing through its lens.

But there are also downsides to using the mobile app: it chews through the battery life of both the camera and your phone, you have to have your phone handy (which isn’t always convenient, especially in action or damp environments), and you can only connect one device at a time. To some degree, these negatives can be addressed using one of GoPro’s dedicated remote controls.

So here’s a rundown on how to connect a dedicated remote control to the HERO6 Black.

To keep things simple and reliable, I’m focusing here on the GoPro Smart Remote and the Remo.

There are some other aftermarket remotes available from other manufacturers, and they’re often significantly cheaper. I’ve used a few of those. Some work well; some don’t. There’s also an older model, the GoPro Wifi Remote. You can get that working with some of the newer cameras (I’ve put together a quick guide here), but unless you already have one, there’s no reason to choose a Wifi Remote over the better and newer Smart Remote.

One important advantage to using the Smart Remote is that you can connect and control up to 50 GoPros at once. And they don’t all have to be the same model. (I’ve put together a guide here). The Smart Remote is also waterproof (but doesn’t work underwater) and has a small screen that’s useful for changing the shooting mode and checking on the camera status.

How to Pair the GoPro Smart Remote to the HERO6 Black

Here’s how to connect to the HERO6 Black with a Smart Remote.

Power on the camera and swipe down on the back screen to access the Settings’ top menu. Tap on the Preferences button.

Tap on “Connections” to open that submenu.

Scroll down to Smart Remote at the bottom, and tap on that.

You’ll then see a message to put the remote into pairing mode.

It will then put the camera into pairing mode. So now we move over to the Smart Remote.

Power on the Smart Remote. Then hold down the button with the wrench (spanner) icon.

The screen will show a camera icon with two arrows moving toward each other.

GoPro has now discontinued the Remo remote, but it’s still available as a connection option on the HERO6 Black’s connection settings.

The Remo is waterproof and simple, with just one button and no screen. It has a shorter working range than the Smart Remote because it only uses Bluetooth, not wifi. But its headline feature–and the reason it exists in the first place–is that it can be used with voice commands to control those cameras that support both voice commands and remote control connections, something that the Smart Remote can’t do.

How to Pair the GoPro Remo to the HERO6 Black

Here’s how to connect to a HERO6 Black with a Remo. The first part of it is basically identical to connecting a Smart Remote. So I’m not going to repost the same images here–the ones above work the same way.

It will then put the camera into pairing mode. So now we move over to the Remo.

While it looks like a single-button remote, there’s actually a second button on the Remo. It’s a small one on the side. Push that in and hold it for 8 seconds.

You should see a small blue light start to flash on the front to indicate the Bluetooth is activated.

The camera should then display a message that it has paired successfully, and your Remo is now connected. You’ll see a blue light flashing slowly on the Remo to indicate that it’s connected to the camera.

How to Charge the Smart Remote and Remo

This isn’t specific to the HERO6 Black, but I mention it in case it’s useful to new users of the GoPro remotes.

Both of these remotes use a built-in rechargeable battery that isn’t removable. So you need to connect the remote directly to a power source to charge it.

With the Remo, it charges using a standard USB-C connection. That’s the same cable that you use to connect the HERO6. If you’ve lost that cable, any USB-C cable should work just fine. The Remo doesn’t take advantage of the rapid charging offered by high-output chargers like the Smart Charger.

With the Smart Remote, there’s a special charging dock that looks a bit like a key. If you’ve lost that dock, there’s no way to charge the remote. The good news is that if you have lost it, you can pick it up as a replacement part from a number of aftermarket manufacturers relatively inexpensively, such as this one. The charging cable uses standard USB to charge, so you can connect it to any of the usual power sources, from wall adapters to USB hubs to power bricks.

Sometimes the pairing process doesn’t go as smoothly as it should, with the camera and remote just not being able to find each other despite both being in pairing mode and sitting right next to each other.

Here are some things you can try to troubleshoot:

Try again. I know this sounds obvious, but it’s also what the camera prompts you to do if the pairing process fails. If it works, great!

Restart. Turn both the camera and remote off and then again and try again.

Reset the connections. This is usually the most effective solution for me, but it comes with the inconvenience of resetting all of your connections, not just the one. On the HERO6 Black, go to Preferences > Connections > Reset Connections. You’ll then be prompted for confirmation.

You don’t have to turn the camera’s wireless connection on first. That’s done automatically as part of the connecting process. So that’s one less step you need to do manually.

There are also some limitations with using the remotes. These issues aren’t specific to the HERO6 Black–they generally apply to these remotes.

While both of these remotes are waterproof–the Smart Remote to 33 feet / 10 meters, and the Remo to 16 feet / 5 meters–they won’t actually work for controlling the camera submerged underwater. That’s because wifi (and Bluetooth) signals hardly penetrate water. But you can use them in the rain or getting splashed on the water’s surface–just not submerged.

GoPro claims the Smart Remote has a range of up to 600 feet (180m). They claim a working range of up to 33 feet (10 meters) for the Remo. In both cases, the “up to” is important, because those are in optimum conditions. In real-world shooting, there are many things that can make conditions less than ideal and result in significantly shorter working distances than that, including interference from other devices or physical obstructions in the line of sight. So if you’re planning on pushing the distance limits, it’s worth testing before a critical shoot. I’m not aware of a signal relay or booster that works with the GoPro remote, but it’s possible there’s something available somewhere that will work.

Unless you really need the voice control, I’d recommend the Smart Remote for every other use over the Remo. Not only is it more powerful and has more features, but in my experience, at least (and, apparently, many others as well, if online reports are any indication), it can be quite unreliable.