The GoPro HERO6 Black supports voice commands, so you can control some basic camera functions hands-free. Here’s how it works and the list of available commands. 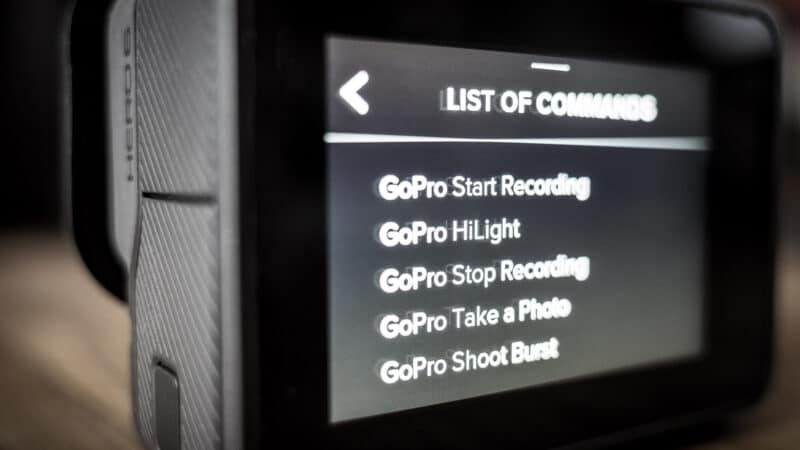 GoPro first introduced voice control with the HERO5 cameras. The GoPro HERO6 Black also supports voice commands. 1 With that feature, you can control some basic functions of the camera hands-free.

Voice control can be especially convenient when your hands are busy holding onto something else, or if the camera is just out of reach. Your mileage might vary and will depend on the conditions you’re shooting in. It doesn’t work well in noisy conditions, if the camera is inside a housing, or if you’re far away from the camera, and it doesn’t work at all underwater. But in some conditions, it can be an especially useful way to control your GoPro’s filming when your hands are otherwise occupied, you’re wearing mittens or gloves, misting spray or splashes are making the touch screen unreliable, or the camera isn’t in an easily accessible place.

So here’s a rundown on how to use voice commands with the HERO6.

There are a few methods of enabling and disabling voice control on the HERO6.

The first option is to use the shortcut panel on the back screen. It’s the icon at the top right–it looks like a person speaking. You can toggle it on or off by tapping on the icon.

A second way is to use the regular menu system. Go to:

A third is to use the GoPro Quik app. Go to:

The voice commands on the GoPro HERO6 are divided into a couple of different categories. The Action Commands control capture.

Turning the HERO6 On and Off with Your Voice

You can also turn the HERO6 on and off with your voice.

To turn the camera off, just say, “GoPro TURN OFF.”

The HERO6 Black also introduced a new feature known as Wake on Voice. It puts the camera in a standby mode (that lasts eight hours) where the camera is listening out for the command “GoPro TURN ON.”

But first, you need to enable On Camera Voice Control (see above).

Then you need to enable the Wake on Voice feature specifically by going to:

With Wake on Voice enabled, it will stay enabled for eight hours after the camera is powered off. During that time, the camera should respond to the “GoPro TURN ON” voice command.

While I hope this page is helpful in laying out what voice commands are available on the HERO6 Black, there’s a quicker shortcut reference that’s especially useful if you’re out and about shooting on location.

The list is available directly through the HERO6’s menu system. Just go to:

Every command needs to start with “GoPro . . . “. This alerts the camera to listen to the following command. The only exceptions are the “That was sick” and “Oh shit” commands to add a HiLight bookmark to the video–you don’t need to say “GoPro” before those.

Voice commands are the kind of things that GoPro can tweak with firmware. So it’s worth making sure that your camera’s firmware is up to date to ensure that the latest list of commands are available. 2

Unlike Siri or Alexa, the HERO6 doesn’t talk back. And if you’ve turned off the beeps, that can make it hard to know whether it has registered your command. So I often find it useful to enable beeps when using voice control.

You can also use the voice control functionality of the REMO remote (although that model is now discontinued).

There are two methods you can choose from in order to change the language of the voice commands. The first is to use the camera’s main menu system by going to:

The available voice control languages on the HERO6 are: