How to Update GoPro HERO7

Here’s how to check and update the firmware of the HERO7 Black, Silver, and White. 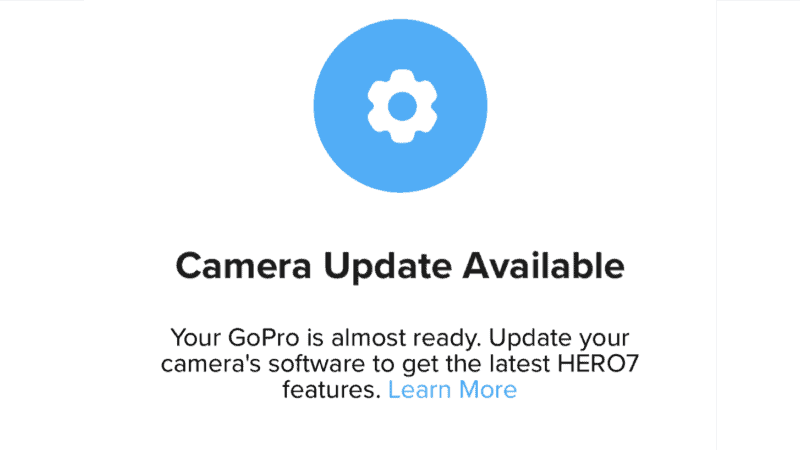 Firmware updates improve the performance of your GoPro camera. They can add features, improve stability, improve compatibility with accessories, and fix bugs. So it’s always a good idea to keep your HERO7’s firmware up-to-date.

There are three ways to update your GoPro HERO7. These apply to all three models in the HERO7 lineup: the HERO7 Black, HERO7 Silver, and HERO7 White.

The manual update is useful if you need to roll back to a previous version. That doesn’t happen often, but it can crop up from time to time.

The third method uses GoPro’s Quik desktop app, which has been discontinued but is still available.

With all of them, make sure that your HERO7’s battery is charged. This is to avoid interruptions to the update process, which can cause problems.

1. How to Use GoPro Quik Mobile App to Update GoPro HERO7 Black

Connect the GoPro Quik mobile app to your HERO7 Black. (If you haven’t done that before, here’s a guide.)

Once the wireless connection is established and the camera and phone paired, the GoPro Quik app will automatically check the firmware version. If a newer version is available, it will prompt you. You can choose to proceed with the update or skip it.

2. How to Manually Update the Firmware of Your GoPro HERO7 Black

With this method, before you can download the firmware file, you’ll need to have your camera’s serial number, and you’ll also need to register the camera with GoPro.

On GoPro’s website, go to the update page that corresponds to your specific HERO7 model. It’s different firmware for the Black, Silver, and White versions–you need to get the right one for the specific camera model:

Scroll down to the “Update your camera manually” link.

Once you’ve done that, you’ll be able to download the update file. The site will prompt you for the next steps, and there’ll be some variation depending on which computer operating system you’re using, but the basics are that you copy the file to your microSD card, insert the card, and update the firmware.

3. How to Use the GoPro Quik Desktop App to Update GoPro HERO7 Black

This works the same way as the mobile app method, with the exception of the connection method. Instead of using a wireless connection, you connect the camera to your computer with a USB cable.

The Quik desktop app is now discontinued, but you can still download it here. It’s free.

With the camera connected (and powered on), when you fire up the Quik app it will prompt you to update the firmware if there’s an update available.

What is the current firmware for the GoPro HERO7?

GoPro posts the latest versions of the firmware on their website. You can find the latest version for the HERO7 cameras at these links (note, it’s different firmware for the Black, Silver, and White versions–you need to get the right one for the specific camera model):

The most recent versions for the HERO7 were released in November 2019, and it’s unlikely that there’ll be new versions beyond those.

The most important thing to know is that the update process should not be interrupted. That’s why you should only start with a charged battery. While the update is being applied, avoid touching the camera’s screens or buttons or messing with your phone (if you’re using the mobile app method).

How often should you update the HERO7’s firmware?

Yes, you need both a battery (charged) and an SD card (formatted) in your HERO7 in order to update the firmware. It won’t let you proceed with the update without them.

How do I check what version of the firmware is on my HERO7 and whether it’s up to date?

You can also find this information by using the GoPro Quik app. Once you’ve connected wirelessly to your HERO7, go to Settings (the gear icon), and then scroll down to the Camera Info section. The Version field is the current firmware running on the camera.

Armed with that information, you can check the latest version released for your specific model:

Images and product information from Amazon PA-API were last updated on 2022-12-05 at 10:08. Product prices and availability are accurate as of the date/time indicated and are subject to change. Any price and availability information displayed on Amazon Site at the time of purchase will apply to the purchase of this product.

How to Update GoPro HERO7