How to Lock the Screen on a GoPro HERO7

If you find that you’re accidentally touching the back screen and changing shooting modes when shooting with the HERO7 cameras, here’s how to lock the screen to prevent accidental changes. 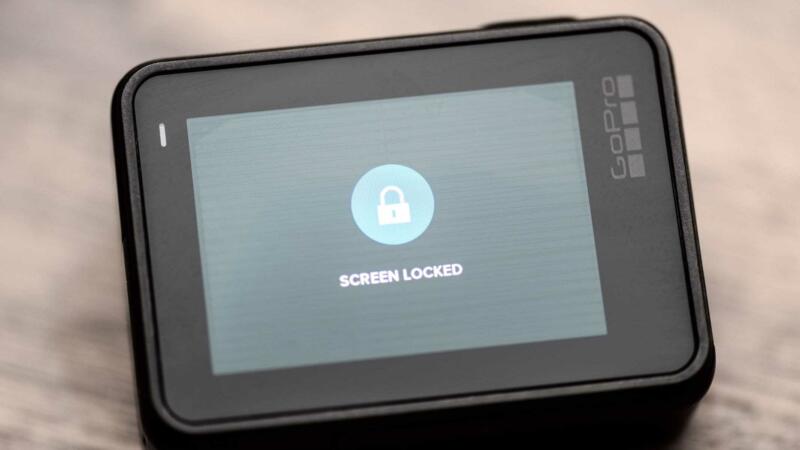 Having touch screens on the back of GoPros is a relatively new addition. The HERO4 Silver was the first model with a built-in screen. Before that, you could add it as an accessory that clipped on the back.

But because of the way GoPros are often used–in a more rough-and-tumble way than your average traditional camera–it’s very easy to bump the back screen and accidentally change shooting modes or settings. It’s something I run into a lot, and it’s a pain when it happens. But there’s an easy fix: lock the back screen.

You can do it on all the GoPros with built-in back screens, although different models do it in slightly different ways. Here I’m focusing on the HERO7 cameras. And it applies to all three cameras in the HERO7 lineup: Black, Silver, and White.

On the HERO7 models, the lock switch is part of the top settings menu, and you can reach it with a single swipe. 1 To access it, swipe down on the back screen to show the settings menu.

You’ll see a row of icons for some shortcut functions. On the far right is a padlock.

Simply tap on that to toggle whether it’s on or off. Blue is on. Gray is off. That’s it—you’re done.

You’ll get a brief display on the screen that says that the screen is locked.

So now you can use the screen as a live view to show what the lens sees, but there’s no longer any risk of accidentally switching shooting modes or changing options.

While the screen is locked, you can still unlock it temporarily if you want to change something. Just swipe down on the screen and tap on the blue icon in the middle. You’ll have to be quick–it only displays for about a second.

Once you’ve unlocked it this way, it’s a very temporary unlock–if you don’t touch the screen again, it will automatically re-engage the lock after about 7 or 8 seconds or so.

Changing Shooting Modes When the Screen is Locked

The new method of swiping from the main screen to change shooting modes that were introduced with the HERO7 cameras is a nice improvement for quickly switching modes. But obviously, that’s not going to work if the screen is locked. But there’s another quick way to switch shooting modes: use the power/mode button on the side of the camera. Each short press will cycle to the next shooting mode. Just don’t hold the button down–that turns it into the power button.

Images and product information from Amazon PA-API were last updated on 2023-02-06 at 21:48. Product prices and availability are accurate as of the date/time indicated and are subject to change. Any price and availability information displayed on Amazon Site at the time of purchase will apply to the purchase of this product.

How to Lock the Screen on a GoPro HERO7