There aren’t many differences between the GoPro HERO7 Silver and White, and only one of them is likely to be decisive for most users trying to choose between them. Here’s a rundown of the differences. 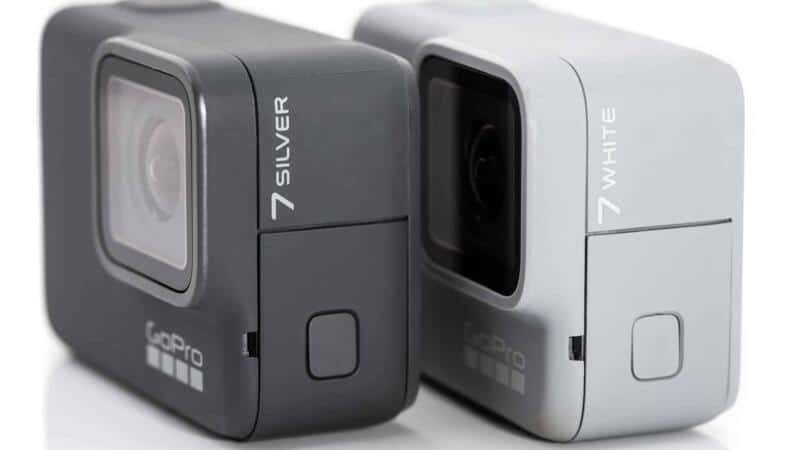 There are three cameras in the HERO7 lineup. The most powerful and feature-rich is the flagship Black edition. I’m focusing here on the other two: the Silver, which is in the middle, and the White, which is the entry-level model.

Overall, these cameras are far more similar than they are different. In fact, there aren’t many differences at all–four, to be precise. Basically, the Silver can do everything the White can do but has a few extra features. But some of the extra features and capabilities of the Silver will make a difference for some users trying to choose between the two models.

Normally with these side-by-side comparisons, I go into a lot of detail on all of the key features. But because these cameras are so unusually similar, that doesn’t seem to me to be the most useful approach here. So I’m going to focus only on the three differences with the aim of spelling them out in plain English. Hopefully, that will then be useful for anyone trying to choose between the Silver and the White.

And if you’re trying to choose between one of these cameras and a different model of GoPro, you can find more comparisons I’ve posted, including the HERO7 Black vs Silver and HERO (2018) vs HERO7 White.

I’ll go into more detail below, but if you just want to cut to the chase, here are the four things that the Silver has over the White:

Two of the differences between the HERO7 Silver and White relate directly to shooting video.

The biggest and most important difference between the HERO7 Silver and White is that the Silver can shoot 4K video while the White maxes out at 1440p60. 4K is much bigger than 1440p (or 1080p) and records much more detail. I’ve included a visual representation of the difference in size in a graphic further down this page. But you’ll only be able to make use of that extra resolution if you’re playing it back on a device that can use it.

Do you need 4K? The reality is that many users don’t. If you’re looking mainly to share some clips on social media or send to friends, then 1440p is probably plenty for what you need. Whether you keep it at 1440p or crop some off the top and bottom to make it the more common 1080p, it looks great on smartphones and tablets and standard HD TVs and computer displays.

The places where you’ll notice the extra resolution of 4K will be on high-density displays, very large computer monitors, or 4K TVs. Another benefit of 4K is that it gives you far more flexibility to crop when editing the footage while still ending up with sharp and detailed footage because you’re starting out with a much larger canvas.

This is a visual representation of the difference:

One other consideration is that 4K brings with it some complications, mainly because the files are much larger and more unwieldy (thanks to the higher bitrate that’s used for it; more on that below). Older, slower desktops and laptops can struggle with 4K footage, especially when editing.

The good news is that turning 1440p into the more common 1080p resolution is easy in most video editing apps, including GoPro’s Quik app. It just means trimming some vertically, either from the top and bottom or one or the other.

This is very much related to the resolution difference. Bitrate is the measure of how much data is being used to encode the video data for a specific chunk of time. With video, it’s usually measured in megabits per second, or Mb/s.

The higher the bitrate, the larger the file. And also the higher potential video quality (although there are other things that also influence video quality). It means that less compression has been applied.

A lower bitrate means that more compression has been applied to create a smaller file. But that compression discards some of the data, which can impact video quality. Ideally, the compression strikes a good balance between quality and filesize.

The Silver does have a higher maximum bitrate than the White, but that higher bitrate applies only to the 4K resolution. When using the same resolution/framerate combinations, the two cameras use identical bitrates. So if you’re shooting at 1440p60, for instance, there’s no difference. So while it’s true that the Silver has a higher maximum bitrate than the White, it’s not really a useful difference to help choose between the two models because the higher bitrate is a consequence only of the 4K video mode.

Here’s a detailed breakdown of what bitrate is used with which shooting mode:

One consideration of the higher bitrate is that it’s more important to use a memory card that’s fast enough to keep up. I’ve put together some practical recommendations for SD cards for the HERO7 cameras here.

The Silver has a GPS sensor inside that can record the GPS coordinates of where you’re shooting the photos or videos. That information is stored in metadata alongside the media files (or, in the case of the JPG photos, inside the EXIF metadata).

How useful that is depends on what you plan to do with the video clips or photos. If you’re sending the photos to a photo sharing service that can read and display the geolocation data, it can be useful to marking the photo locations on a map, for instance, or even automatic location tagging. It can also be useful in image editing apps like Lightroom as a way of organizing large numbers of images by location.

One other consideration is that turning the GPS sensor on uses extra power, which in turn cuts into battery life.

The still photos from each camera are slightly different. They both produce the same size photos (10MP) and save them as JPGs. But the Silver does some in-camera enhancement known as WDR. It stands for wide dynamic range, and the idea behind it is similar to high dynamic range, or HDR, in that it’s trying to recover some detail from bright areas and dark areas (or highlights and shadows) that might otherwise be lost. On the Silver, it’s always-on; you can’t turn it off.

In most cases, it makes a little difference but not a lot. And, frankly, it’s a feature that I’ve been underwhelmed with since it was first introduced with the HERO5 models. As much as I’m a fan of using GoPros for taking photos, the WDR feature isn’t something I think is worth factoring into a decision on which camera to choose.

GoPro HERO7 White vs Silver: Which to Get?

Overall, the 4K video capability will be the most decisive difference in features in choosing between these cameras. That makes it pretty easy: if you want 4K, go with the Silver. If you don’t need it, the White will almost certainly be fine.

But there are two other factors that aren’t really features in the normal sense of the word. The first is price. GoPro has priced the White lower than the Silver. And it’s not a small difference, at least in terms of their suggested retail price: $299.99 vs $199.99 (that’s the MSRP; you might find them on sale for less than that). So the question really becomes: is the 4K capability worth the extra $100 to you?

The second is simplicity. Both cameras are easy to use. But for some users, the stripped-down feature set of the White will appeal precisely because it doesn’t have bells and whistles to get bogged down in. While there’s not much in it, the White does have the edge in terms of ease of use.

The other three differences between these models–the higher bitrate, the GPS, and the WDR photos–are much less useful for helping to decide between these two models. The higher bitrate is only relevant to the 4K, and while there are certainly users that want and need the GPS, that’s probably not a feature that’s decisive for most users. And in my opinion, at least, the WDR photo enhancement is underwhelming.

So if you’re trying to choose between the HERO7 Silver and White, as far as I’m concerned it really comes down to three questions:

Both of these cameras have non-removable batteries. And both use a USB-C charging cable.

Where to Buy the HERO7 Silver and White

Images and product information from Amazon PA-API were last updated on 2022-06-27 at 09:38. Product prices and availability are accurate as of the date/time indicated and are subject to change. Any price and availability information displayed on Amazon Site at the time of purchase will apply to the purchase of this product.